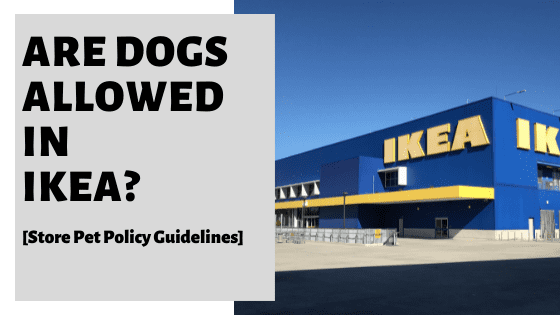 After a week of working, it’s understandable that you’d want to bring your pet out with you while you run errands. Want to go to IKEA but unsure if your dog can come inside with you? Well, here is what you are going to need to know.

So, are dogs allowed in IKEA? Only legally recognized service dogs are allowed in IKEA stores. And this is the case for most of their stores worldwide excluding some stores in Switzerland that allow entry for leashed dogs. However, IKEA is rolling out amenities for dog owners, including Dog Parking facilities outside of their stores.

More and more businesses are becoming animal-friendly to accommodate shoppers accompanied by their dogs.

But why doesn’t the most famous Swedish furniture retailer allow dogs, for the most part?

Most IKEA stores worldwide aren’t dog-friendly due to strict health and safety protocols. Only service dogs are allowed in stores.

Since IKEA was founded in 1943, it has spread across the world and now has 445 stores worldwide.

It has grown from being a furniture business to incorporating other homeware goods as well as grocery stores, restaurants, and bistros.

With this growth, health and safety policies have become stricter including pet policies.

No matter how well trained a dog is, there is always that risk of them breaking free and running rampant, destroying merchandise.

It might be caused by other people approaching them or dogs challenging them.

However, IKEA needs to ensure that the potential of an outburst is as slim as possible.

Excluding the potential of wreaking havoc, IKEA is a business after all, and it needs to put its customers first.

Unfortunately, it’s common for people to have allergies to animal fur (3 in 10 people in the US alone), and being surrounded by dogs indoors discourages those potential customers from shopping, affecting profits.

Especially if the fur is likely to get on bedding and other goods.

There is one exception though – service dogs.

These are permitted inside IKEA, and any other store for that matter because they are crucial to some customers’ lives.

Besides, this definition by ADA (Americans with Disabilities Act) sums it up perfectly:

Service animals are defined as dogs that are individually trained to do work or perform tasks for people with disabilities.

Some State and local laws also define service animals more broadly than the ADA does, so this may need checking depending on where you reside.

What Are IKEA’s Pet Policies?

IKEA’s official policy on pets is that they are not allowed inside unless they are certified service dogs for a person with a disability.

IKEA’s stance on pets is so strict because they need to adhere to certain health and safety policies, especially for the stores that have a food component with it.

Regardless of how obedient a dog is, there are too many variables that can happen in-store that can cause issues.

It’s a popular and busy place, after all.

A dog may become overly excited or nervous in the store and could cause damage to the store, and potentially harm to shoppers.

Damage to merchandise and threat to customer health and safety could cost millions for IKEA so it’s understandable why they have such strict pet policies.

More and more IKEA stores now have a food element attached to it, whether it’s a grocery store or a restaurant.

However, service dogs are permitted in all IKEA stores to avoid discrimination towards those people who need these potentially life-saving animals.

These service dogs are individually trained to look out for their owner’s health.

Therefore, it makes logical sense why these types of dogs are allowed inside. Plus, they are well trained and less likely to be disobedient.

That being said, most emotional support service dogs aren’t recognized in an official capacity by the ADA, so they will be refused entry.

However, the ADA (Americans with Disabilities Act) can register some emotional support animals.

As mentioned above, the majority of IKEA stores worldwide follow the same attitude on refusing entry to pets.

However, it can depend on how strictly the store you enter follows these policies.

Some stores might be a bit lax in enforcing the rules.

And then, there’s the case of a few stores in Switzerland that officially let dogs indoors.

And stores in Lyssach and Spreitenbach provide kennels outside the front of the store where dogs can stay while their owners shop inside.

Where Can You Leave Your Dog When Visiting IKEA?

Some IKEA stores provide Dog Parking outside their stores where customers can leave their dogs while they shop. This is still in a trial period so most dogs will need to be kept tethered outside or kept in cars.

Beginning in Cologne, Germany, IKEA has started to roll out Dog Parking so customers can happily shop while their dogs are kept outside.

This Dog Park is set up in front of the store, in a shaded area, where owners can fasten their dog’s leash to a post above an artificial grass platform.

Water can be provided upon request and some stores provide toys and balls to keep the dogs entertained while their owners are shopping.

However, these Dog Parks are unmanned so there is a risk of dogs breaking loose, fighting with other dogs, or being stolen.

These types of Parks are slowly being rolled out across European stores with mixed reactions.

Some owners like to have this option, so their dog is safe from overheating in the car.

Whereas others are nervous of their dog being left unsupervised, opening them up to the risk of being stolen.

Until Dog Parks become more common across IKEA stores, the alternatives are to keep your dog at home, secured outside the storefront, or in the car until you’ve finished shopping.

Even though it’s becoming more acceptable to bring dogs into stores, it’s still up to each business to decide if they want to allow it.

Unfortunately, IKEA doesn’t allow dogs (other than service dogs) inside.

However, IKEA is rolling out specifically designed Dog Parks to encourage shoppers to still come shopping with their dogs.

And if you are wondering where else you can take your dog inside, check out the following guides below: