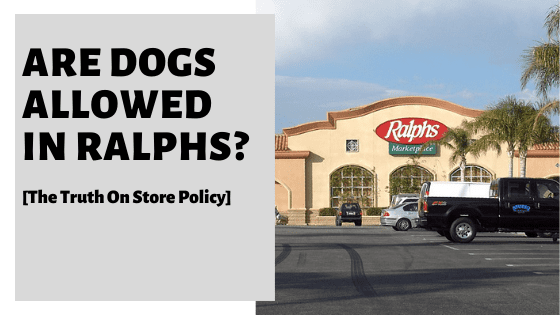 Are you stopping by at Ralphs for a spot of grocery shopping? Are you wondering whether your dog can join you in attendance? Well, this is what you will want to know.

So, are dogs allowed in Ralphs? Dogs are not allowed in Ralphs, as per store policy. The only exception is with service dogs. That being said, people have been known to take their dogs into this grocery store. Employees have been trained not to challenge and may only ask for a dog to be taken out if they are misbehaving.

Just because you ‘can’ take a dog into Ralphs doesn’t necessarily mean you should.

And that ‘can’ simply means you might not always be challenged.

Though, this is an important point to make because you may, or might see other dogs in Ralphs.

Besides, that may be why you are here today.

And it can lead to confusion.

Let us now take a close at the laws that are in place regarding bringing dogs into Ralphs.

What The Laws Say About Dogs In Ralphs

State and local laws generally prohibit animals in grocery stores. This is because food is prepared, stored, and sold in these locations, and the presence of an animal could pose a sanitation risk.

Now when it comes to Ralphs specifically, we are mostly talking about Californian state law.

And section 114259.5 of the California Retail Food Code says that:

So it’s not just grocery stores, it included restaurants too.

However, there is one exception to this rule. Service dogs.

Now, it’s important we quickly define what a service dog is:

Service dogs are allowed everywhere a human is. No exceptions.

That’s because an individual is so dependent on them.

However, one type of working dog that does not get the same privileges under the law are therapy dogs:

Therapy dogs do get access to a few more places, but businesses that sell food are a no-go area for them.

Why Dogs Are Sometimes Seen In Ralphs

With these laws in place, it makes you wonder why some dogs are still allowed to enter Ralphs and why owners are not asked to take their dogs outside.

Well, this is because the management has advised staff to not challenge customers.

They are only permitted to ask if a dog is a service animal.

And with a question like this, there is always the possibility that false claims are made.

Now the only exception is that dogs are not behaving well; being overly animated, barking, toileting.

In those instances, employees will generally ask an owner to leave their dog.

But even then, they will need to make accommodations for the customer to continue to shop.

Dogs are not technically allowed in Ralphs.

That doesn’t necessarily mean you won’t see them in there, though.

In reality, this has a lot to do with the loophole arising from the real and purposeful need for service dogs to enter these kinds of businesses.

And when it comes to storing employees; there really is very little they can do.

Now, I am not giving you a free pass to enter this grocery store with your dog, nor am I here to tell you what to do with your dog; I am just relaying the reality.

But put it this way, if you don’t need to take your dog to Ralphs, then you shouldn’t.

Besdies, there may be other customers who are scared of dogs or even have allergies.

So regardless of how well your dog is trained and socialized, it is generally recommended that you make other arrangements as and where possible.

And if you are wondering where else you can take your dog inside, check out the following guides below: