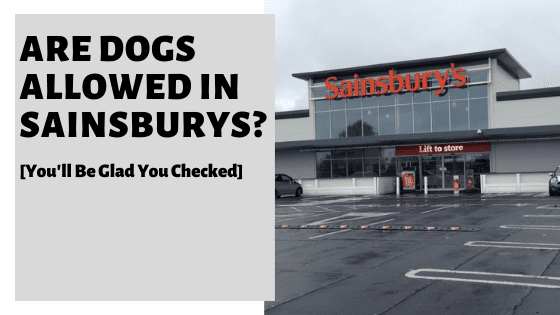 Are you planning on heading down to Sainsbury’s for your weekly shop? Perhaps you are standing outside on your phone now and plan to pop in for a few bits. But you are wondering whether you can head in with your dog alongside you, right? Well, is this allowed or will you be asked to politely leave? Here is what you are going to want to know.

So, are dogs allowed in Sainsbury’s? Dogs are not allowed in Sainsbury’s, either the larger supermarkets, smaller Sainsburys Local stores, or petrol stations. The one exception is assistance/ service dogs – those who are legally allowed to enter all public spaces and who undertake essential tasks and responsibilities for their people.

This nationwide store policy can be a little inconvenient.

Especially if you are already there with your dog, or even if you just want to get something quickly.

Besides, it may well be that you have a very well-behaved and properly socialized dog or even one that fits under your arm conveniently.

But that doesn’t change the rules, I’m afraid.

Dogs are not allowed in Sainsbury’s. Period.

With one exception we will soon be taking a look at.

There is no law or health and safety regulations that ban dogs from being in places where food and drink are sold or served – this includes supermarkets.

The only exception is that dogs cannot enter areas where food is prepared or handled such as a kitchen.

That being said, it is up to the owner of an establishment whether they would like to allow dogs.

And in the context of Sainsbury’s – they do not allow them.

They have a nationwide no-dog policy that applies to every store without exception.

Let us now look at why.

Why Sainsburys Does Not Allow Dogs

Sainsbury’s does not allow dogs first and foremost because they are a supermarket that predominantly sells food.

Now while they have certainly expanded their product range of late, particularly when it comes to their TU clothing line, Sainburys is fundamentally a food store.

Even if most of it is packaged, some of it is not – fruits and vegetables being the most obvious example.

And there is a real risk of contamination, or a dog transferring something over to these foods.

Secondly, we also have to consider the real chance and possibility of a dog needing the toilet.

Now, most dogs are well toilet trained, but not all.

Some dogs will literally go anywhere they can, or when they need to go.

So hygiene is of course a significant factor behind dogs not being allowed in stores.

But then there are two other to consider, too:

From a safety perspective, dogs may not be well socialized (at least from Sainsbury’s perspective).

They have no way of knowing how a dog will or will not behave.

They could become a little aggressive, or some customers may even be outwardly scared of dogs.

Not good for business.

And then there is the allergies argument.

Some people are legitimately allergic to dogs (particularly their dander).

With all these things in mind, it actually makes sense dogs are not allowed in Sainsbury’s.

And a universal ban is much easier and fair to implement than on a case-by-case basis.

That just wouldn’t be possible!

The one exception to the ‘no-dogs’ allowed policy in Sainsbury’s is for assistance dogs.

You can see this directly on their company website:

Assistance dogs are those that support an individual due to a particular disability.

And such individuals that use assistance dogs have rights under the Equality Act 2010.

Here’s an important takeaway from this act

The Equality Act 2010 prohibits service providers, including taxis and restaurants, from discriminating against those who need an assistance dog with them. It also requires service providers to make reasonable adjustments for disabled customers.

In other words, assistance dogs must legally be allowed entry, and supermarkets (and other stores) must accommodate them as and how they can.

Now, it’s important to recognize that these dogs are working dogs.

Highly trained and even-tempered where individuals are dependent on them to go about their day-to-day lives.

As such, Sainsbury’s must legally allow their admittance to ensure all individuals are physically able to shop there.

Now, most individuals with assistance dogs will carry some form of identification. Possibly a badge or some other indicator that their dog is for assistance.

Assistance dogs will usually be easily identifiable – usually by the harness, they are wearing or some other clear visual sign.

This is not always the case.

It is for this reason that Sainsbury’s staff will not typically challenge individuals about their dogs.

In fact, the staff is advised not to challenge or ask customers to leave if they have a dog with them.

That’s to prevent any instances where disabled individuals are wrongly asked to leave; it wouldn’t look good from a PR perspective!

That being said, this is not to say that anyone can claim their dog is an assistance dog.

While this policy is open to being abused, it’s essential to remember why Sainsbury’s bans dogs in the first place, and respect the needs of individuals who need an assistance dog to get their shopping.

Dogs are not allowed in Sainsbury’s. Whether they are well-behaved, timid, or even if you can carry them.

The only exception is assistance dogs, a stance the supermarket makes pretty clear.

So, your main options are to leave them at home, leave them outside with somebody looking after them, or forgo your shop altogether (and come back later).

I know it’s inconvenient, but this is a store that does sell food, after all.

Wondering what other supermarkets and stores’ dog policies are? Check out my other guides below: