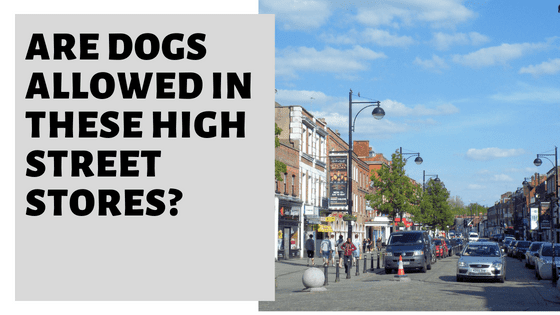 Do you need to go shopping? Are you looking to pop down to your local high street? Fancy taking your dog along with you? Well the question is, of course, whether you’ll be allowed to enter the store with them.

So, to save you time and some potential awkwardness, I decided to call up and contact a few of the major high street store chains to find out what their policies were relating to allowing dogs in store.

You’ll find exactly what each advised me below.

Are Dogs Allowed In Wilko?

Are Dogs Allowed In B&M Stores?

B&M Stores does not typically allows dogs, with the only exception being assistance of guide dogs.

Are Dogs Allowed In Poundland?

Dogs are not allowed in Poundland. The only exceptions is assistance and guide dogs.

Are Dogs Allowed In The Range?

Dogs are generally allowed in The Range, so long as they are well behaved.

Are Dogs Allowed In Selfridges?

@tashdevmakeup Hi, dogs are allowed into our stores if they are small. They have to be carried or in a holdall #CS

Dogs are generally allowed in Curry’s PC World, so long as they are well behaved.

Are Dogs Allowed In Decathlon?

Dogs are not allowed in Decathlon. Only assistance and guide dogs will be allowed admittance.

@sfchapman our policy is for only guide dogs to be allowed into our stores. Beyond this would be down to the discretion of the store.

Are Dogs Allowed In Argos?

Dogs are not allowed in Argos, except for assistance and guide dogs.

As you can see, it’s a bit of a mixed bag when it comes to high street stores allowing dogs.

So my advice would be… Call or contact a store ahead.

And not just through the main company line. Call the exact store you are wanting to go to.

Besides, it’s generally not a good idea to leave your dog tied up outside on a high street!

Wondering where else you may be able to take your dog inside? Then check out my other guides below: