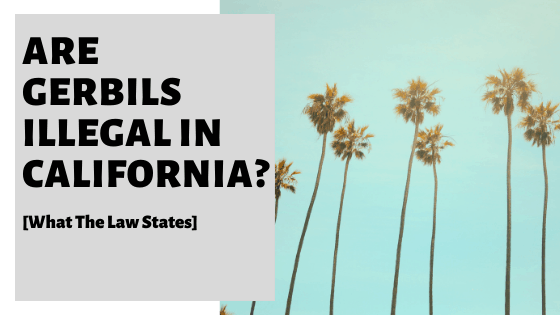 Living in California is great for so many reasons; the weather, the food, and the relaxed casual culture. I could go on. There is one downside though, and that’s the laws on pet ownership. To say the laws are strict on what you can own, is perhaps, an understatement. But what about gerbils? Can you freely own these as pets in the Golden State? Here is what you will want to know.

So, are gerbils illegal in California? Gerbils are illegal to import, transport, or keep as pets in California. The only exception is if you acquire a permit and meet specific conditions – although these are seldom granted to individuals and are mostly reserved for institutions like medical research facilities or universities.

Certainly is if you are keen on owning one of these rodents.

Or if you presently do and have plans to move there.

But unfortunately, the law is there for a reason – whether it’s convenient for you or you agree with it or not.

And chances, the laws are not going to change any time soon.

Let us now look at exactly why an animal as cute as a gerbil is banned in CA.

At the end, we’ll be looking at some very similar rodents that you can legally keep.

So be sure to keep reading. You may just discover your next pet!

Why Are Gerbils Illegal In California?

Gerbils are illegal in California as a means of protecting native Californian ecosystems – including both wildlife and plant populations. Laws have thus been put in place as a preemptive measure.

And the government is quite concerned about what could happen if gerbils were to escape or be released into the wild purposefully by owners.

Well, because the Californian landscape is incredibly similar to that of the gerbil’s original habitat (back in their native Mongolia).

A dry, arid, and desert-like environment; one that has extreme temperature fluctuations and at the same time; plenty of vegetation and food sources for a gerbil to thrive.

And as gerbils are “not normally domesticated” in the Californian state – they are considered to pose a huge risk to the ecosystem.

And this includes other animals too.

The state government is of the opinion that gerbils would wipe out other species and cause wide-scale effects to the food chain.

And this could result in the extinction of native Californian species.

So, California decided to implement specific laws, which you can see in section 671 of the Importation, Transportation, and Possession of Live Restricted Animals act.

Can You Get A Permit To Own A Gerbil In California?

Only select institutions can get a permit to own gerbils in California. Even then, such institutions would need sufficient justification and must adhere to strict rules and regulations.

It is within section 671.1 that sets out who is applicable for a permit.

Research and scientific institutions, educational institutions (such as universities and colleges), governmental agencies, and certain shelters; are the main institutions that can apply.

They may not be approved; there are no guarantees.

And there is a range of other criteria they need to meet.

Along with fees, requirements, and stipulations.

For the average Californian resident who may want to own this rodent – it’s not going to be feasible I’m afraid.

Other Restricted Pets In California

Gerbils are not the only species of animal that is restricted or banned in the state of California.

The full list is again set out in section 671 of the California Code of regulations.

But there are a lot of pets you cannot legally own.

Perseveration and protecting the native ecosystems appear to be at the forefront of all such restrictions.

It’s illegal to import, transport, or possess a gerbil in California.

And you’re going to want to comply with such laws.

Breaking it could result in a hefty fine or even jail time.

Besides, if you were to be caught – your gerbil will be confiscated by the authorities and will likely be euthanized.

Something, you want to obviously avoid at all costs.

But the California state government is not taking any chances.

And when we learn about where these rodents come from and the conditions they need to thrive, we can soon see why these laws have been put in place.

Even if it means we go without.

Just consider that if you already own a gerbil and are moving to California; then that’s illegal too.

Crossing the state boundary with your gerbil on your person will mean you’re breaking the law.

So, it’s important to make any arrangements ahead of time if this does apply to you.

And while the list of restricted and illegal pets seems exhaustive in California, thankfully there are some other rodents that are legally allowed.

Here are the main ones

So at least there are options; and ones not too dissimilar from the gerbil.

When Did Gerbils Become Illegal In California?

Gerbils have been banned in California since 1933 when the state legislature first began to rule these rodents as potentially dangerous species. Various laws have been implemented since.