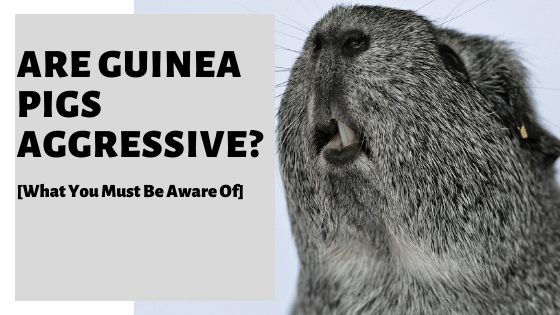 Nobody wants an aggressive pet. Besides, it just makes the whole thing stressful and challenging. But in some animals, it just cannot be helped. What about guinea pigs? Are they naturally like this, and is this something an owner should expect? Here is what you need to know!

So, are guinea pigs aggressive? Guinea pigs are generally not aggressive animals – instead, they are very social and mostly friendly toward one another and humans alike. However, illness, boredom, unhappiness, cramped living quarters, and same-sex pairings have all been known to cause displays of aggression in these rodents.

And as social animals, they certainly do best when kept in groups.

In fact, these are not the type of pet you would want to keep alone.

That being said, this is not to say that a pair or group of guinea pigs will never have their disagreements.

And getting the social hierarchy right actually requires quite a lot of thought and careful planning.

Otherwise, you can expect your guinea pigs to fight.

A sad and unfortunate sequence of events – for sure.

So, with this in mind, let us now take a closer look at keeping these rodents properly to ensure aggression is not a regular occurrence!

Are Guinea Pigs Aggressive To Humans?

Guinea Pigs are rarely aggressive toward humans. Instead, they are generally relatively calm and known to develop strong bonds and trust with their owners.

That being said, guinea pigs are pretty skittish and particularly mindful of their welfare.

This is primarily why they often hide when new to an environment or when they have recently been brought home.

In time, they can learn to recognize those who take care of them and help them meet their needs, such as the provision of food.

Nevertheless, they are known for being flighty animals – keen to run away if they feel a little uneasy in their surroundings.

This even happens with the humans in which they trust.

While it is true that guinea pigs can learn to tolerate being picked up, so long as it is safe, carefully, and done so slowly, this is not something that they ever particularly become at ease with.

And if a guinea pig is backed into a corner or does feel under threat, they are likely to bite as a means of self-preservation!

Are Guinea Pigs Aggressive To One Another?

Guinea pigs are generally not aggressive with one another, but they can be in particular circumstances or situations. In fact, there is a higher incidence of aggression and fighting in same-sex pairings.

Most owners will own multiple guinea pigs and keep them together without issue.

Of course, there may be some settling in; but for the most part, it is actually advised to keep more than 2 guinea pigs together, if possible.

Besides, this is how they live in the wild.

But, it is not that simple.

You do need to consider the sex of the guinea pigs being kept together.

Two males housed together, particularly along with another female, have been known to cause aggressive behavior.

And the truth is; it’s all about establishing dominance.

And it can get quite dangerous too, especially if the situation progresses into biting.

This is why it is vital to ensure your guinea pigs have been sexed before bringing them home.

Besides, you may not want your male guinea pig impregnating the female, either.

Nonetheless, if you get your pairings right, two females or a neutered male and two females, you’re unlikely to see aggression.

Unless something else is going on.

As we will now explore below.

What Can Cause Aggression In Guinea Pigs?

Aggression in guinea pigs is generally caused by improper pairings, illness/injury, a lack of sufficient space or boredom.

But this is not just about sex.

It’s about personality too.

Some guinea pigs will naturally slot into a social hierarchy. They may not challenge for dominance.

They may be willing to play the submissive role, and as a result, aggression and fighting do not occur.

However, if two or more guinea pigs want to challenge the status quo or be the more dominant pig of the pack, expect aggression.

Usually causes aggressive behavior to arise in what may seem like out of the blue.

Besides, guinea pigs will instinctively try to protect themselves. And even more so if they are increasingly vulnerable.

So, you should be sure to monitor your guinea pigs for any changes in their behavior and look out for any visible signs of pain in them.

Lethargy, lack of appetite, being overly skittish – these are some potential other signs to look out for, along with the aggression.

Be sure to contact a vet if you suspect your guinea pig/s are unhappy or injured.

They may require medication.

We all need our space.

And the same can be said for guinea pigs.

In fact, in the wild, these rodents have a lot of it!

So, it’s only natural for them to become unhappy without enough of it.

Or if they are kept in too close proximity to others in the group.

As such, you will need to ensure that they have a sufficiently large cage.

Inside the cage, you should also be providing hideouts and areas for your guinea pigs to find shelter and their own space.

Sometimes dividers have been known to help too.

Along with the cage, be sure to let them out in a safe area to roam every now and again. A playpen is ideal for this kind of thing.

Guinea pigs get irritated when they are bored and without sufficient stimulation to keep them occupied.

So, you’ll want to ensure that they have enough toys and things to keep them engaged.

Things to chew, things to climb; these are ideal here.

Can Guinea Pigs Kill Each Other?

For the most part, it is unlikely that a guinea pig would be able to kill another. Especially if they were of equal size and age, or you are able to intervene and break up any fighting. However, it has been known for bigger, dominant guinea pigs to kill weaker or smaller guinea pigs in a fight.

The truth is, it is certainly possible.

Especially if blood is drawn.

Or if a guinea pig were to bite in the wrong place.

And we have to remember that death may not be something that happens immediately during or even straight after a fight.

And infections have been known to kill guinea pigs too.

This is why it is so critical to get your pairings right from the offset.

It’s also why you always need to monitor your cavies closely – even more so when you introduce a new guinea pig to the group.

And if you do notice a wound on one of your guinea pigs, its best to contact a vet.

When To Separate Guinea Pigs

The best thing you can do is to keep them apart for sufficient time; this will allow them to settle down.

It’s a good idea to keep them in a separate room for the night, in a separate cage that is sufficiently large, clean, and stimulating.

You’ll need to make sure that neither of your guinea pigs is injured, and if they are, you may need to get some veterinary support before you attempt any reintroduction.

Assuming your guinea pigs settle down overnight, you can look to introduce them the following day.

Be sure to do so slowly and carefully. Remain close and vigilant.

You may notice that they circle one another but only separate them again if they resort to lunging or biting.

If they do manage to keep things civil, you’ll still need to keep a close eye on them in the days following the reintroduction.

If, however, fighting reoccurs at any point after the reintroduction, you should separate them apart more permanently.

You may need to invest in another cage long term.

It’s also a good idea to consult a vet on both guinea pigs too, just to rule out any other possibilities that could be causing the aggression.

Just be careful during any separation, potential reintroduction, or removal.

It’s easy to get caught and bitten when guinea pigs are fighting and as you attempt to break it up.

So, always put on a pair of gloves first and plan your movements wisely!

Guinea pigs can be aggressive. But generally, they are not.

So the word here to take note of is can.

Aggressive displays do happen and might happen at some point.

It is more likely at the beginning or when something is not quite right.

Whether it is the environment, the pairings, or the health of one of your cavies.

Nevertheless, there are some things you can do to keep the aggression at bay.

Researching into proper pairings, appropriate introductions, getting a sufficiently large cage, providing plenty of toys/enrichment, and ensuring your guinea pigs remain healthy will make all the difference.

Get those right, and it’s unlikely you’ll notice aggressive behavior rarely, if ever, at all.