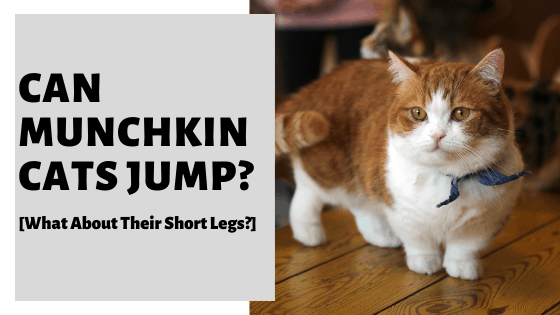 Munchkin cats are quite unique in their appearance. Otherwise known as the sausage or original breed of dwarf cat due to their short legs. But does this impact their ability to jump? Can they still even do so? I spent some time researching whether or not it is even possible and what it means for owners.

So, can munchkin cats jump? Munchkin cats can and are willing to jump, although they typically cannot jump as high as other cats. This is due to their short legs, which is a characteristic of the breed. Nevertheless they are generally still capable of jumping on furniture around the home, including countertops and coffee tables.

Munchkin cats have their short legs for a reason. Its actually a genetic mutation as opposed to any selective breeding.

There is a specific gene that has been identified for their shorter legs, just like you see in certain dog breeds like the Corgi or even the Dachshund.

Thankfully, a cats spine is different in structure to that of a dog; so a Munchkin is not prone to spinal issues that are commonly experienced by their short-statured dog counterparts.

However, these short legs do have an impact on agility, with jumping being one such activity that is limited.

Let us now take a closer look at how high a Munchkin cat can jump, along with other similarly related tasks (such as climbing).

How High Can A Munchkin Jump?

How high a Munchkin cat can jump is predominantly determined by the leg length in which they possess.

There are in fact, three different leg lengths that have been observed in the breed.

In order of shortest to longest these are:

As such, the longer the legs of the Munchkin, the higher theoretically that they can jump.

Its only natural to assume that a cat with longer legs will be able to generate more power, even if this is not a fact and points more towards logic and subjective opinion based on other owners.

Although, there are of course other factors involved; such as age and weight.

An older, heavier cat will not be able to jump as high as a lighter, younger cat for instance (irregardless of the breed).

Nevertheless, your average Munchkin cat (of each leg length) should be able to jump up onto a sofa at the minimum.

Some owners have even reported on Reddit that their Munchkin has been able to jump from the floor to their shoulders. Although how tall said owner is not known.

For others, they report that their cat is more willing to run than jump.

So there is definitely individual variances involved.

Can Munchkin Cats Jump As High As A Normal Cat?

It is generally accepted that a Munchkin cat cannot jump as high as a normal cat.

Although, a lot will depend on the leg length and the individual cat in question.

There are certainly some athletic Munchkin cats that can jump as high as your average cat.

But, it is more common that the average Munchkin is less capable due to their physical limitations.

One thing is for sure though; a Munchkin is no less willing to jump than any other breed of cat.

If they have the desire or the need to, they will attempt to do so.

Interestingly, many cat owners report that their Munchkin cat almost does not consider or even realize the limitation they are born with.

Munchkin cats can climb; in fact, they are considered to be at least as proficient, if not better climbers than other breeds of cat.

They are in fact very agile, due in part to being a small breed of cat; only weighing between 6 and 9 pounds, on average.

Nevertheless, it comes recommended that you do support your Munchkin, and help them to explore heights more easily.

A low entrance cat tree is one of the best investments for this particular breed. It helps them to climb up safely and get to the heights that will still want to explore.

At the same time, these kind of platforms can help a Munchkin on their way down.

Having shorter legs does mean that falling is more problematic, and can result in injury more easily.

Munchkin cats are incredibly cute; it comes as no surprise that you may be looking at this particular breed.

At the same time, its only natural to question their agility – smaller legs are logically going to impact how they can get around, move and navigate your home.

However, these cats are actually quite capable when it comes to jumping and climbing.

Sure, they may not be able to climb as high as other breeds, but they can still make most heights safely and their desire remains the same.

In fact, Munchkin cats have been compared to ferrets for their playfulness and their motion of running, chasing and playing with their toys.

This is a curious breed; so getting a high quality cat tree to help them get up to new heights safely comes advised.

Beyond this, getting interactive cat toys is a great way to meet their curious nature, and partake in play time with them.

One final thing to note, is that due to their challenges reaching higher places, you’ll sometimes see the recommendation to keep them indoors.

Whether this is something you want to do is going to depend on context. What your outdoor space is like and if there are any potential ‘predators’ in the area.

Either way, it is probably best to keep an eye on them if they do go outside, keeping them in a controlled and supervised setting.