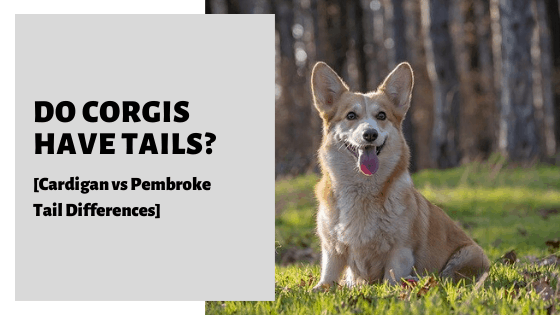 If you are anything like me and love the Corgi dog breed, you may want to know more information about them. Specifically, the differences between the Cardigan Welsh Corgi and the Pembroke Welsh Corgi. One of the most frequently asked questions regarding both breeds is do they have tails? Here is all you need to know.

Breeders need to know the differences between the two breeds to identify them and understand each of their specific requirements.

Let’s discuss both breeds in more detail and explain more about their differences and similarities.

There are two distinct breeds of Welsh corgis: the Cardigan Welsh Corgi and the Pembroke Welsh Corgi. They are considered distinct from each other because they originate from different ancestors.

Historically, the Cardigan Corgi comes from Celtic Norse settlers, while the Pembroke Corgi dates back to when Flemish weavers settled in Wales, around 1200 BCE.

The reason why they look so similar is due to cross-breeding in the 19th century, that took place in the respective namesakes; Pembrokeshire and Cardiganshire.

It wasn’t until 1934, that the two types acquired separate recognition, until then it was very stressful for breeders at dog shows because a judge would favor one breed over another which led to a lot of strife.

Both Cardigan and Pembroke Corgis are strong, athletic, and lively dogs with short powerful legs. They have an affectionate temperament, being companionable without being overly needy.

They are also very intelligent and are renowned for learning new things quickly and responding well to training.

Today, the most visual differences between the breeds are the ears (the Pembroke’s are pointed whereas the Cardi’s are rounded) and the tail.

Do Cardigan Corgis Have Tails?

Cardigan Corgis have tails, it is their most distinguishing feature, longer than their body height, which means that their tails touch the ground.

Another feature that is unique to cardigans, is their rounded ears.

The Cardigan Welsh Corgi is among the oldest dog breeds from Wales, it is believed that they come from the ancestors of the Dachshund, and have a recorded history from 3000 years ago.

Cardigan Corgis are the larger of the two breeds, their height generally doesn’t exceed 31.5 centimeters, their bodies are large in comparison to their short legs.

There is an acceptable range of coat colors for Cardigans: sable, brindle, and shades of red.

They have a prominent bend in their front two legs, this is a feature that the Pembroke doesn’t have.

They have always been considered herding dogs in sheep and cattle farms, their short legs are an advantage because they can avoid getting injured by cattle because they are close to the ground, Cardigans can easily nip at the feet of cattle to herd them.

Cardigans make wonderful pets because they are highly intelligent, obedient, and loyal, however, they are wary of strangers.

Do Pembroke Corgis Have Tails?

Pembroke’s are born with very short, curly, tails that are typically docked when they are a few days old.

The ears are pointy compared to the roundness of the Cardigan’s ears. The common height for a Pembroke is 25-30 centimeters, the male breed weighs no more than 14 kg, while the female weighs 11 kg.

Pembroke’s come in a range of five color variations, of which three of those ( red, white, and sable ) have white marks, while two ( black-headed and red-headed ) come in tricolor.

The length of their coat differs upon various parts of the body, the fur tends to be longer behind their fore and hind legs and they have more volume of fur on their neck, chest, and shoulders.

The Pembroke Corgi is known for its’ high intelligence and is ranked the 11th smartest dog breed in the world.

Similar to the Cardigan Corgi, the Pembroke makes a great herd dog, due to its’ small stature and short legs.

They make great pets due to their good nature, loyalty, and high intelligence, they are generally very friendly with everybody including strangers.

The two breeds have similar median life spans, they tend to live until they reach 12 years of age. Canine cancer is usually the main cause of their death as well as old age.

According to a survey carried out by the Kennel Club Purebred Dog Health in 2004, the two breeds suffer from similar, health complications throughout their entire lives, however, Pembroke Welsh Corgis generally are more susceptible to different types of eye conditions compared to Cardigans.

They both tend to have reproductive issues, such as having false pregnancies and needing Cesarean sections.

Because corgis were originally bred to be farm dogs, they do require a lot of daily exercise to be healthy.

They need at least one hour of activity a day, this helps to prevent boredom that often leads to behavioral issues. There are three main ways to ensure your corgi gets some much-needed exercise and that is:

Let’s take a look at some of the main similarities and differences between the two breeds of corgis.

Continue reading: Why Do Some Dogs Have Curly Tails? [All You’ll Want To Know]