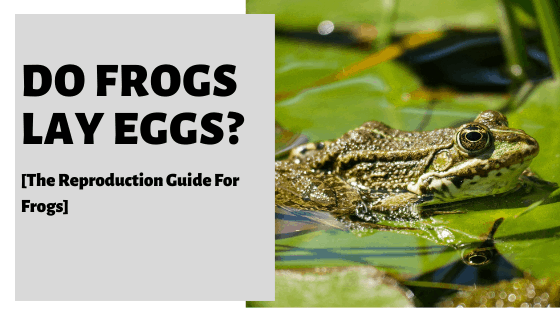 Are you wondering how frogs reproduce? Not sure whether these amphibians lay and develop from eggs? Here is all that you will want to know.

So, do frogs lay eggs? Frogs lay eggs in water, anywhere from 2-10,000 at a time (depending on the species). A group of eggs laid at the same time is known as a clutch. Frogs abandon their eggs resulting in a low survival rate. Successfully fertilized eggs that a predator does not eat will hatch into tadpoles.

Although, the amount of tadpoles that develop from eggs into tadpoles is considerably less.

There are a lot of hurdles the eggs and later tadpoles have to go through.

And here is why.

In almost every species of frog, the fertilization of eggs happens outside of the female.

It all starts with the male frog.

He will begin the process by croaking, enticing females to deposit their eggs for reproduction.

From there, interested females will lay their eggs, in the hope, of being fertilized.

The male may then proceed to fertilize them.

‘May’ is the important word here.

And this is why a female frog lays so many eggs; because she has to overcompensate for all of those potential losses.

Let us now take a closer look at some of the other critical aspects of egg-laying in frogs.

Besides, it’s a very intriguing process!

Do Frogs Lay Eggs In Water Or Land?

In fact, this research at the University of California has suggested that some frogs are evolving to lay their eggs on land to increase their chances of reproduction.

Away from predators, but most importantly, away from the competition of other frogs.

And it’s the males who are making this transition.

By luring females away to more private land, away from a highly competitive arena of males.

“Frog species vary in where they mate, where they lay eggs, where tadpoles develop and whether and how eggs and tadpoles are tended to by parent frogs. Some species even skip the egg stage, giving birth to live tadpoles or even froglets.”

And here is another fascinating insight:

“Biologists noticed an apparent linear progression toward more terrestrial reproduction throughout frog evolution and proposed that frogs avoid putting their eggs and tadpoles in streams or ponds because they would be more vulnerable to aquatic predators.”

One thing to note is that this research primarily centered on tropical species of frogs. This is where there is the greatest diversity of frog species and complexity in frog reproductive systems.

And while this may be a progression in some species, it does not appear to be the case for all.

At least at this stage.

For most species, they will lay their eggs in bodies of water.

Do Frogs Lay Eggs With Shells?

Frogs do not lay eggs with shells. Instead, the eggs of the same clutch will collect together in jelly-like masses.

When eggs are initially laid, they are much smaller and are covered up with water. This will prevent them from drying up and dying.

However, in time the eggs will swell up with water and become much bigger. This is primarily why we see huge collections of voluminous frog eggs.

But without a shell, you can imagine, these eggs are particularly vulnerable to predators!

How Many Eggs Do Frogs Lay?

The amount of eggs frogs lay depends on the species. Some frog species will lay thousands of eggs at a time, whereas others will lay only a handful.

Let us now take a closer look at some common frog species and the average number of eggs they lay at a time:

Quite the variety, eh?

And this is per clutch – in other words, the number of eggs laid at one time!

But how often do frogs lay eggs?

Let us take a closer look!

How Often Do Frogs Lay Eggs?

Nevertheless, conditions need to be optimal for frogs to begin laying and fertilizing eggs.

And in most species, the breeding season begins following a period of rainfall.

This is usually during the spring, once the cold, dry months of the winter have passed.

But in some locations in the world, this may also be in the summer.

If there has been a lot of rain, then breeding can likely commence.

As most frog species lay their eggs in water, it’s only natural that there needs to be a sufficient amount of it for them to be able to lay and conceal their eggs successfully.

It is increased rainfall that will refill bodies of water – making reproduction possible again.

And then there is typically warmer weather and food availability too.

The males start to croak, and the females begin to lay their eggs to be fertilized.

As the natural ebb and flow of rainfall differ dramatically by location, different species of frogs will be able to lay eggs more or less frequently.

And then there the variances in species too. Particularly when we consider how many eggs they are laying at a time.

Nevertheless, most species of frogs will lay eggs 1-2 per year (that is 1-2 clutches).

Frogs lay eggs. And for most species, they lay quite a lot of them.

And it’s all a matter of increasing chances of survival.

Not just in surviving hungry predators, but in getting a male to fertilize them too!

Not all female frogs will die after laying eggs, although some will from exhaustion. This is increasingly more likely if they are breeding in either of the weather extremes (very hot or very cold). Some females can even be inadvertently killed by enthusiastic males keen to reproduce.

How Many Eggs Do Frogs Lay Per Year?

A frog can lay anywhere between 2-60,000 eggs per year. It depends entirely on the species and the number of times they lay each year.