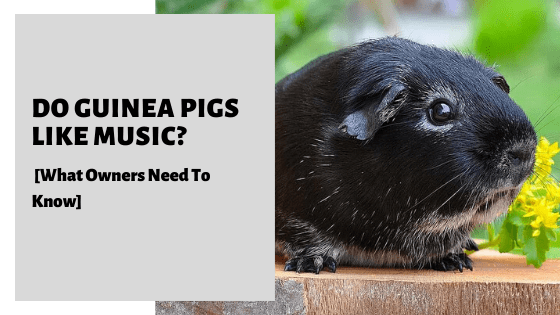 Owning a pet guinea pig comes with a range of questions and considerations. But what about music? Can you put some on specifically for your cavy to listen to, or is it even okay for them to be present while you listen to a few of your own tunes? Intrigued, I decided to do some research on the topic. I would like to share all that I have been able to find with you here today.

Spending time with your Guinea Pig is an important part of their care. As important arguably as providing a clean home and food in terms of their happiness.

Being around your guinea pig, and even just talking to them, can make your pet feel calm and safe. It can also help minimize feelings of loneliness.

Music may seem like a good idea, but its always a good idea to check on these things before you expose your guinea pig to any potentially stressful and traumatic event. Let us now take a closer look at the main questions regarding music and your guinea pig(s) so that you can keep them safe and even, improve their well-being.

Can Guinea Pigs Listen To Music?

Owing to the fact that we generally share a living space with our pet guinea pigs, it is highly likely that your pet will be exposed to music of some sort in their life.

First and foremost, its important to note that guinea pigs have very highly developed hearing. In fact, they are much more sensitive to sounds and noises than us humans. They have developed sensitive hearing in order to listen out for potential predators; an adaption crucial to survival in the wild.

For this reason, guinea pigs can hear music; and they do so differently to you and I.

Some guinea pigs might enjoy music, whilst others may be distressed by loud or unfamiliar sounds.

It is always a good idea to monitor your guinea pig’s behavior if you are unsure and if they seem distressed, seek alternative music or stop playing it around them.

Signs that your guinea pig is enjoying listening to the music you are playing might include:

Owing to the fact that guinea pigs generally have a strong sense of hearing, they do not enjoy loud noises or loud music.

Loud, unexpected or extended sounds can be very frightening for your pet guinea pig. And continued exposure to loud noises can damage their hearing.

In the wild, guinea pigs are prey animals. Their strong sense of hearing has evolved as a defence mechanism to enable them to escape from potential predators. So, guinea pig’s hearing is more sensitive than humans.

For this reason, sounds – particularly music – that is considered at a normal level for us humans may be way too loud or unbearable for your guinea pig.

This difference in sound sensitivity is well worth considering when putting on music in the company of your pet.

Soft and calming music, such as piano covers of your favourite songs, chimes and sounds of water have been known to be particularly relaxing for your pet Guinea pig.

Guinea pig owners have even reported that their pets have a distinct taste and preference in musical genre! In fact, Maroon5, Lady GaGa, The Beatles are amongst some of the artists that our furry little friends tend to enjoy.

When considering the type of music that your Guinea Pig might enjoy, opt for soft and calm music. This way your guinea pig is less likely to be stressed and they may experience a feeling of calmness and contentment whilst listening.

How Loud Should I Play Music For My Guinea Pigs?

As mentioned previously, guinea pigs have a higher sensitivity to sound than we humans do. A guinea pig’s hearing range is roughly 54-50,00Hz. This means that loud noises or high frequency sounds can be stressful and irritating to them.

Music such a rock, screamo or anything that is loud, jumpy or involves a lot of base can be harmful to your guinea pig’s ears.

If you choose to play these genres of music, it is probably best to do so quietly or when you are not around your guinea pigs.

We would recommend, therefore, playing music at a volume that you would consider to be of moderate sound. Loud enough so that it can be heard, but not if you were to leave the room.

Some guinea pig owners recognise that because they are generally sociable animals, guinea pigs can often enjoy music or the radio being left on for them as company if they are being left alone for extended periods throughout the day.

If you are leaving music on for your guinea pig in the back ground it should be on very softly and be calming for them. Surprisingly, you can find specific Guinea pig playlists on Spotify, YouTube and Amazon Music that have suitable tunes to play to your pet. Cool right?

How Do Guinea Pigs React To Music?

Depending on their personality, your guinea pig may enjoy music or they may find it to be stressful. We would recommend monitoring your pet’s behaviour to better understand their preference and care for them accordingly.

Guinea pigs who enjoy music will often close their eyes and make little purring sounds. If they are calm in their demeanour and behaving normally you can assume that your guinea pig is content to listen to whatever music you have playing.

On the other hand, if your guinea pig shrieks, whines or chatters its teeth, that is a clear sign of fear and distress. The best thing you can do is turn the music off and remember that your guinea pig’s health and well being is incredibly important.

Generally, a guinea pig will be able to convey in their ‘body language’ if they are enjoying something or not. They way they react to music will indicate to you, as their owner, whether or not the music you are playing is suitable for them.

Whilst there are no specific scientific studies at present to confirm or refute this, owners have reported that some genres of music have a calming effect on their guinea pig.

Particularly when the music is left on as company for your guinea pig as they tend to be very social animals.

Low volume, soft music is typically what we would recommend when seeking to calm your guinea pig.

Music such as piano music, bells, sounds of water and relaxing music playlists. If you find the music soothing and not too loud, chances are your guinea pig will too.

Are Guinea Pigs Afraid Of Music?

Guinea pigs have been known to be frightened by or afraid of music either when it is too loud or of a heavy tempo.

The same can be said for other loud noises and fast paced, high frequency sounds. As an owner, you should seek to protect your guinea pig’s vulnerable ears from sounds such as:

Whilst many of the noises on this list are beyond the control of you as a guinea pig owner, it is good to have an awareness and potentially limit the effects of such harmful noises.

Calming, soft sounds can provide your sociable guinea pig with company, relaxation and enjoyment. Remember, guinea pigs have far more sensitive hearing than you or I, so make sure the music you are playing them isn’t too loud!

Familiar sounds can be comforting to your guinea pig and as they are domesticated animals, guineas tend to respond well to these, as they are used to being around humans.

Whilst there is little scientific evidence to support whether our guinea pigs enjoy music, as their owner, you are best placed to understand what sooths your pet and what agitates them.

Opting for relaxing, soft sounds is the best way to go if you are choosing to play music for your pet guinea pig.