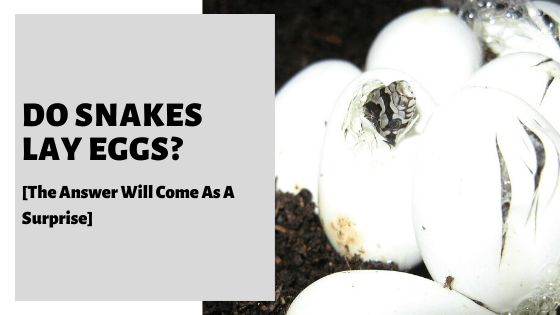 Snakes are rather interesting reptiles. They are unique in a lot of ways; birthing is one such example. But what about eggs? Do snakes lay them or are there differences between the species? If they do, then how do they do so? Well, here is all you are going to want to know.

You may have been looking for a straightforward answer and explanation but interestingly, it’s impossible to give one. It all depends on the species of snake in question.

Let us now explore the subject further so that you can get a better understanding.

We will be looking at how snakes lay eggs along with other fascinating topics like how many eggs a snake can lay and the frequency of reproduction.

How Do Snakes Lay Eggs?

One of the most interesting aspects regarding snake biology is that not all snake species give birth the same way. In fact, there are three different ways a snake can give birth:

Oviparous is the term given to species of snakes that lay eggs. Of course, it is the female snakes that do so. Around 70% of all snake species are egg-laying.

Viviparous is the term given to species of snakes that give birth to live young (live baby snakes).

These baby snakes will grow within the mother snake; obtaining nutrients and being protected during their earliest phases of life.

They are then born (once fully developed) and often left to defend for themselves. No eggs are involved for this species.

Ovoviviparous is the term given to species of snakes that both lay eggs and give birth to live baby snakes.

For these species, the mother will carry her eggs for most of the time during the development of the young.

However, when the snakes are ready to enter the world, the eggs will be broken inside the mother snake before they are birthed alive.

If you are wondering what species of snake fall into each category, the following table will give you some of the most common:

How Many Eggs Do Snakes Lay?

Snakes can lay on average, anywhere from 2 eggs all the way to 80 eggs at a time. As you can imagine, the size of the eggs largely dictates how many will be passed.

Again, each species of snake will vary in regards to how many eggs they can lay at any one time.

On the lower end of the spectrum; Burmese Pythons are known to lay between 4-8 eggs at a time.

At the other end and extreme of the spectrum, Ball Pythons have been known to lay 75 eggs and more!

Either way, the number of eggs laid in one sitting is known as a ‘clutch’ of eggs.

And this is just within the Python species alone.

There are numerous reasons why it is believed that different snake species will lay different proportions of eggs:

How Many Snakes Can Be Delivered Alive

For Viviparous snake species, there are obviously other considerations that will impact how many snakes can be birthed at any one time (this is known as a ‘litter’).

The average number of snakes in a litter ranges from 10-40 between the species. Of course, this will vary between them.

On the lower end of the spectrum; Garter Snakes have been known to give birth to 50 small snakes and more.

At the other end and extreme of the spectrum, Anacondas produce from 15-35 snakes at a time.

Again, the following factors all cause the number of snakes in a litter to vary:

All animals will have a period in between pregnancies and birth.

There is always an amount of time that must pass for an animal to biologically prepare and be ready for the next ‘round’ of babies.

Of course, each animal will have a different amount of time that must pass before pregnancy is again possible.

Its highly instinctual, and generally follows a set schedule within each species.

For snakes, they give birth 1-2 times per year. This is true regardless of whether the snake is an egg-laying (Oviparous). live birth producing (Viviparous) or Ovoviviparous (combination of the two).

You would therefore expect 1-2 clutches of eggs from egg-laying species or 1-2 litters from live birth-producing species.

When Do Snakes Lay Eggs?

Unlike humans (whereby we can give birth throughout the year at different times), snakes follow different patterns. There are times and seasons that dictate their biological processes. Birthing is one such example.

Snakes tend to mate and birth from June to August.

While other species may mate and birth outside of this, it is only a month or two out of this average time zone (like in May). Location and species type play big part here.

Generally, snakes make in the spring and give birth during the summer.

While no exact date can be identified for when mating begins/birthing ends, snakes have an instinctual and biologically driven mechanism which means these times of the year are routinely followed.

Where Do Snakes Lay Eggs?

Snakes use a combination of techniques when it comes to laying their eggs. The most common is burying the eggs. Sometimes, however, ‘nests’ are made for them.

These are not nests in the traditional sense of the word. These nests are being accidentally created by the mother snake as part of the process to conceal her eggs.

Nests are therefore forming from dirt or any other material in the environment that is brought together as part of the digging process.

The only species that is an exception to the rule is the King Cobra. These species do ‘nest’ their eggs, and even incubate them until they hatch. This is most uncommon among snakes as we will discover in the next section.

For Viviparous snakes (live birth), they will instead go underground when they can be more protected as they give birth.

Interestingly, snakes are born ready to defend themselves against predators. They are born with an instinct to survive.

Do Mothers Protect Their Young?

For the majority of snake species, young baby snakes will live their first few days alone following hatching/birthing. The King Cobra which does protect its young is a rare exception.

From reports, it can be safely assumed that egg-laying species are more likely to offer protection to their young.

Sometimes this is in the form of incubation; providing warmth to help the babies finalize their growth ahead of hatching.

At other times, snake mothers will protect their eggs from predators by circling the eggs.

Contrastingly, snakes that give birth to live young do not stick around and leave their babies to fend for themselves following birth.

Yet while this may seem negligent, consider that snakes are born ready to defend themselves and fight off predators.

Baby snakes are not vulnerable like a human baby, they leave their mother with fangs and sometimes even venom!

So if you were wondering whether snakes laid eggs, the truth is that some do. In fact, most do (70% of snake species).

Species of snakes that lay eggs will produce a clutch (group) of eggs, 1-2x per year. They will lay them around June-August and may bury them, protect them or leave them to hatch unprotected.

Alternatively, you have species of snakes that give birth to live baby snakes.

Again, this occurs 1-2x per year, around June-August, but these baby snakes typically enter the world alone.

They are usually equipped with natural defenses, like fangs and venom, to protect themselves from predators.

Lastly, you have snakes that do not conform to either category; and sit somewhere between the two. Carrying eggs, before delivering live baby snakes.

As you can see there is no straightforward answer to the question, but hopefully, this article has helped you to understand the reproduction processes and natural biological occurrences in snakes.