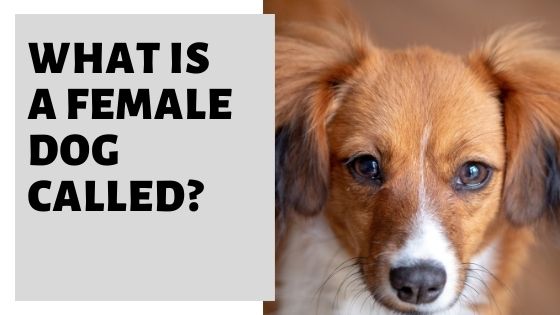 Are you trying to refer to a female dog but are not sure what to call them? Well, you’ve come to the right place. Here is what you need to know, and why they are called this surprising term!

So, what is a female dog called? A female dog is called a bitch. This is true of female dogs of all ages and of all breeds. Although in dog breeding, the female parent of puppies is sometimes referred to as the dam.

That’s right. You read the first term there correctly.

But it’s not derogatory; it’s a word that has been used for thousands of years.

Long before the term started to be used as a swear word or slur.

As we shall now explore below.

Why Is A Female Dog Called A Bitch?

A female dog is called a bitch because this is the origin of the term. It’s a literal translation.

Just like a female sheep is a ewe; a female bovine is a cow; a deer is a doe; a mule is a jenny; a horse is a mare – these are all just terms that have historically been used to describe the female sex of the animal.

Although the origins of the term have never been found, according to the Oxford English Dictionary, it derives from the word “bicce”, which dates to circa 1000.

It is thought to have originated from a Germanic language, from the Old Norse word “bikkja”, or a cognate of the two.

What is a female dog called in Spanish?

A female dog is called a “perra” in Spanish.

What is it called when a female dog gets fixed?

The proper term for a female dog getting fixed is called ‘spaying’.

What is a young female dog called?

A young female dog is often called a pup (more generally in regards to their age) or a bitch (the name for a female dog).

What is a mature female dog called?

A mature female dog is called a bitch, although if she has had a litter she may be referred to as a Dam.

What is a spayed female dog called?

A spayed female dog is called a bitch, like any female dog.

What is a female dog called in French?

A female dog is called a Chienne in French.

What is a female dog called in German?

A female dog is called a Hündin in German.