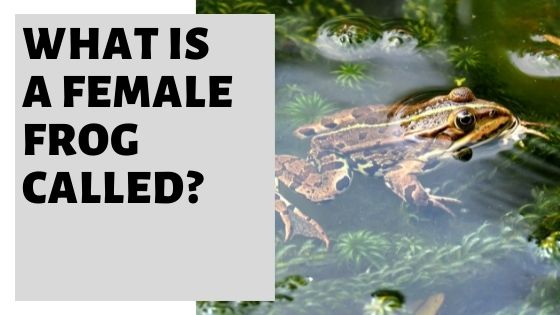 Are you looking to describe a female frog? Are you not sure what the right term is to use? Well, you’d be surprised to learn that this is how they are commonly referred to.

So, what is a female frog called? A female frog is called a frog, or a female frog – there is no recognized and commonly used name to differentiate them from males. That being said, female frogs may be referred to as a tadpole, or froglet, depending on their age and the stage of metamorphosis they are in.

Ultimately, it has a lot to do with their development; but still, they still have the same terms for the males, too.

So males also share the terminology tadpole and froglet too.

Naturally, you now be wondering what the life stages look like, and when each term should be used.

Well, I’ve created a quick and simple image for you below to explain it:

How to tell if a frog is male or female

The best way to tell whether a frog is male or female is to compare specific body characteristics. You can check body size (females are generally larger than males) look for nuptial pads (males possess these on their hands), compare colors, and look at the ears (males generally have larger ears than females). Although each of which will vary by species.

What is a baby frog called?

A baby frog is called a tadpole, or froglet, depending on its age and stage of metamorphosis.

Is a tadpole a baby frog?

A tadpole is considered a baby frog.

What are the 5 stages of a frog?

What is a tadpole with legs called?

A tadpole with legs is called a froglet. Sometimes they are referred to as polliwogs.

What is a frog with a tail called?

A frog with a tail is called a tadpole. Although, there are some species that do possess tails as adults (which go by the namesake ‘tailed frogs’.