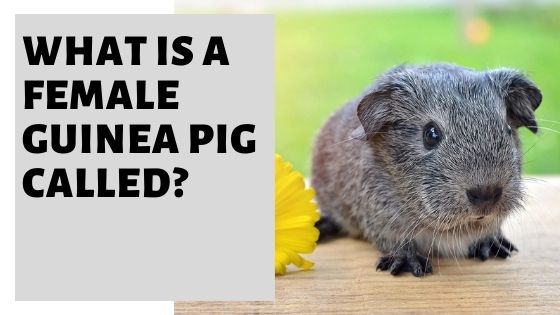 Are you looking for the collective noun for female guinea pigs? Not sure what is the right term to refer to them as? Well, this is the one you are going to need to use and a potential exception too!

So, what is a female guinea pig called? A female guinea pig is called a Sow. Although they may be referred to as a pup if they have just been born or are still young (the same name is used for baby/young males too).

The term Sow is actually used for various different animals too, by the way.

It’s not unique or limited to just guinea pigs.

Below are the other animals where the females also get called Sows.

What is a female guinea pig called in Spanish?

A female guinea pig is called a Conejillo de Indias in Spanish.

What is a female guinea pig called in French?

A female guinea pig is called a Cochon d’Inde in French.

What is a young female guinea pig called?

Young female guinea pigs are called Sows unless they are newborns or young. In that case, they are often called pups more generally instead.

How to know if guinea pig is male or female?

The best way to tell if a guinea pig is a male or female is to check their genitals. Females will have a “Y” shaped genital opening, whereas males have a small circular dot with a penis situated above.

Can guinea pigs be both genders?

Guinea pigs cannot be both genders; they are either male or female.