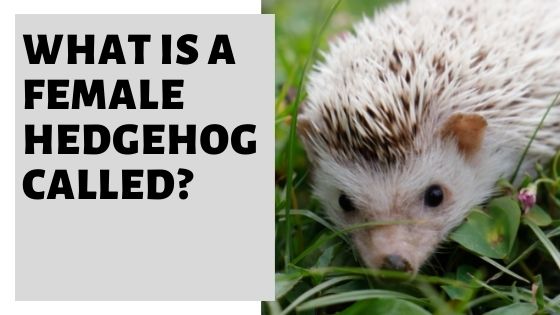 Are you wondering how to refer to a female hedgehog? Not sure what terminology you need to use? Well, you’ve come to the right place. Here is what you can say.

So, what is a female hedgehog called? A female hedgehog is called a sow. Although they may be referred to more generally as a hoglet, or a hedgehoglet, if they are still young.

In fact, hedgehogs actually share the same terminology with several other animals.

For instance, the following females of the species also go by the name Sow:

What are mother hedgehogs called?

Are all hedgehogs female?

Not all hedgehogs are female.

Are male or female hedgehogs bigger?

Male hedgehogs are typically bigger than females. However, age, seasonal effects, and individuality can result in a female hedgehog being larger than a male hedgehog.

How to tell the difference between a female and male hedgehog

The best way to tell the difference between a female and a male hedgehog is to identify the sexual organs. Male hedgehogs possess a penile sheath halfway up the tummy – it looks like a large belly button. Females do not have this; instead, their sex organ is located adjacent to their anus.