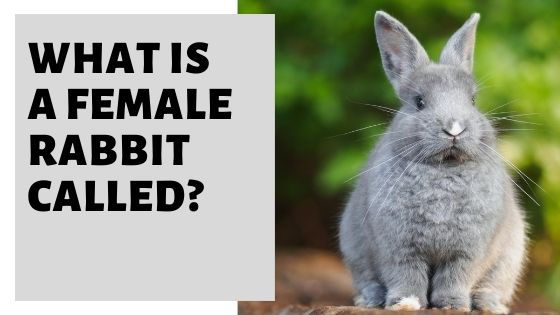 Do you need to refer to a female rabbit, specifically? Not sure what word is best to use or that relates to this gender? Well, you’ve come to the right place. Here is the term(s) you can use.

In fact, female rabbits actually share their names with a number of other animals too, including:

At the same time, a female rabbit may also be colloquially referred to as a “bunny,” (just like the males) or if they are adults, they are sometimes called a “coney” too.

Why Is A Female Rabbit Called A Doe?

It is not currently known why a female rabbit is called a doe. Although, the origin of the term likely derives from the Old English term Da.

Again, why female rabbits share the same name as females of other animals is also unknown.

What is a mature female rabbit called?

A female rabbit is often referred to as a doe, but they can also be called coneys (which is a term used to describe adult rabbits, in general).

What is a young female rabbit called?

A young female rabbit is often called a doe, although they can also be called kits or kittens more generally.

What is a male rabbit called?

A male rabbit is called a buck. Although, a male rabbit may be referred to as a sire if he is breeding or has managed to have some kits (baby rabbits).

What is a baby rabbit called?

A baby rabbit is called a kit, although they are sometimes also referred to as kittens too. A group of kits/kittens is often referred to as a litter.