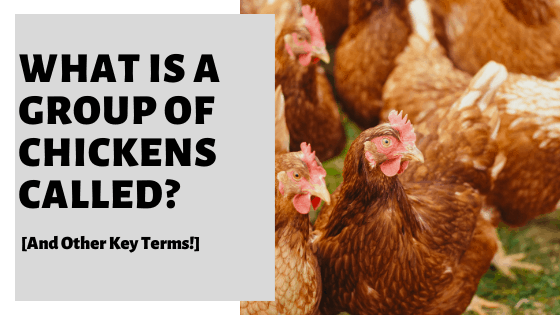 As you can see, the number one determining factor in how you should reference these birds, appears to be their age.

These are especially helpful if you are looking to keep chickens so be sure to check them all out and become familiar with them!

There are generally four different terms that are commonly used to describe a group of chickens. These are: a flock, brood, clutch and a peep.

Let us now take a closer look at the nuances between them:

A flock is an adult group of chickens, or those that are of mixed age. This group will live together, most commonly in a coop, and will already have a pecking order established.

Flocks develop once a group of chickens has been together for some time; so it is possible to add new birds to a pre-existing flock.

Although if you were to, there would be a natural readjustment, as chickens find their new places in the social hierarchy.

A brood is used to describe a group of chicks. This can either be in a brooder, or that are with a broody hen.

If a brood is raised with the flock, then they will become part of it in time.

A clutch is the term used to describe a group of eggs. There is usually 12-15 eggs per clutch, and a hen will lay a new egg each day until the clutch reaches this size. At that point, the eggs will be sat on to be incubated by the mother hen.

Lastly, when chicks first hatch from their eggs, they peep out. Hence, very young chicks are sometimes called peeps.

Below, we take a look at the other important terms often used to describe chickens:

The last thing we need to consider is how a chicken develops, and how this development brings around different stages of life, and terms used to describe it.

Here it is, for reference.

At different stages of the life cycle chickens will look and behave differently.

For instance, chicks will not yet have developed many feathers and will be significantly smaller than by the time they develop into cockerels or pullets.

Its easy to get confused.

It comes as no surprise that you get questions like;’ what is the difference between a chicken vs a hen‘ or a ‘chicken vs a rooster.’

I get it, I’ve asked those very questions before myself.

Thankfully, with a little bit of research you can learn to differentiate the terms.

The term chicken can be used in reference to both males and females (or hens or roosters).

A little confusing perhaps, but an important point to make.