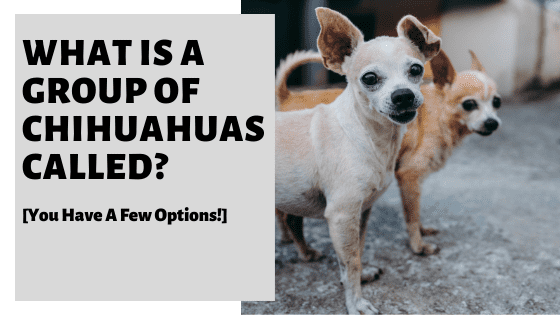 How do you refer to a group of Chihuahuas? No this is not a joke. Instead, I am going to be sharing with you some collective nouns that can you use for this particular small dog breed.

Most of those above are official names by the way.

So do use them at your peril.

You may get some odd looks.

And you may need to explain yourself!

That’s why a pack of dogs is, for the most part, the most appropriate.

But it certainly is not as fun.

To the point where many people have reported and documented the terms, they used to refer to this breed when it comes together as a group.

In fact, one rather humorous one that I have not already listed as “a heaven”.

Coming Up With Your Own Name For A Group Of Chihuahas

Outside of pack, or the more commonly used chatter, you can come up with your own group name. The best way to do so is to simply start with their traits and features.

That is essentially how that group name came about.

The fact that if you put a group of chihuahuas together, they’ll make quite a bit of noise by chatting!

So you could do the same.

What about a “shake” of chihuahuas for instance, due to this breed’s propensity to shiver and shake.

I know, not the best, but you get the idea.

Otherwise, stick to pack or chatter, you can’t really go wrong with either of them!