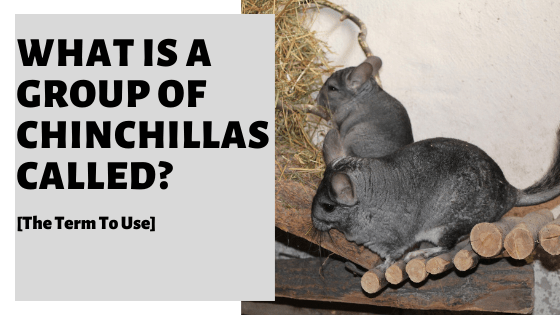 Need to refer to a group of chinchillas but not sure what the correct terminology is? Well, here is what you want to know.

Not too dissimilar to guinea pigs then – who interestingly enough, also collectively go by the name herd.

They are both rodents, I suppose.

And it does make sense when we inspect the definition of the term:

At least the the one given by the Cambridge Dictionary:

‘A large group of animals of the same type that live and feed together.’

Does this sound right for this particular animal?

Lets find out whether chinchillas actually do live in herds or whether they are more solitary by nature.

We’ll then be looking at some other useful terms to be familiar with – if of course, chinchillas interest you…

Do Chinchillas Live In Groups?

And as part of this defensive strategy, herd of chinchillas will typically be found in underground burrows or even among the crevices of rocks.

They don’t want to be detected.

Of course, if you intend on owning a pet chinchilla, things will be a little different.

Besides, you’ll be keeping them in a confined space and cages only come so big and we can only accommodate so much space.

Thus, it is common and recommended to keep chinchillas in single sex pairs.

While you can keep them on their own, keeping them in pairs is generally better for their wellbeing.

It provides them with companionship, plus they can snuggle up with one another when it comes to nap time.

If you do decide to keep more than one chinchilla however, it is advised to purchase them together.

Introducing a chinchilla to one already established in their cage and that has settled into their new home can come with many challenges.

Its not just the group name that is useful to know. Instead, there are a range of other terms that are useful to be aware of when it comes to chinchillas.

Let us now take a closer look at some of the more common ones:

Read more: What Is A Female Chinchilla Called?

What Is A Baby Chinchilla Called?

A baby chinchilla is called a kit.

There you go; a herd, or colony of chinchillas.

That’s what you can use from now on.

Although, if you are feeling a little bit imaginative, there is no reason why you cannot invent your own collective noun.

What about a scuffle, for instance.

Or anything that relates to their behavior, traits and tendencies.

That being said, don’t be surprised if nobody gets what you mean.

It may require a bit of explaining.

Better yet, just stick to herd!