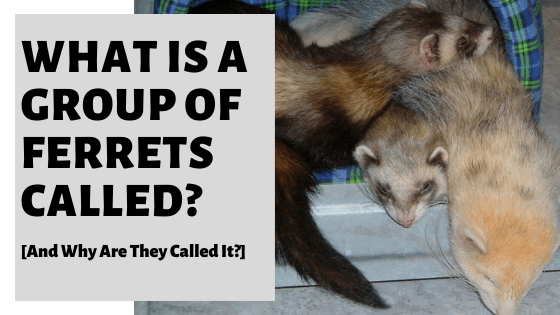 I was watching a video of a small group of ferrets the other day, looking all mischievous, as they do. I was about to call my partner in to watch, but the thought soon struck me, how can I refer to this group? What is the collective noun for ferrets? It got me thinking and researching. And here is all that I found.

So what is a group of ferrets called? A group of ferrets is called a business. Although historically, they have been known as a busyness, which derives back to the word ‘besynes’. It is believed that the reasoning behind this collective name, is in reference to their lively nature, and characteristic of being busy.

Groups of ferrets have been described for centuries.

In fact, it appears that the debate around what these small mammals should be called dates back to at least, the ‘Book of St Albans’ in 1486.

But of course, language was different back then.

“Besynes” was the term of those times.

And it gets a little more interesting still.

“Fesynes”, “fesnyng”, and “feamyng”, have also been entries in some dictionaries for a group of ferrets, but these are considered to be ghost words.

In all seriousness, these are terms that have unlikely ever been used:

‘A ghost word is a word published in a dictionary or other similarly authoritative reference work, that has barely, if ever, been used in practice, and that was previously meaningless.’

So, chances are, ‘Besynes’ has been used throughout history.

Why Is A Group Of Ferrets Called A Business?

A group of ferrets is called a business in relation to their characteristic of keeping busy and being active, inquisitive animals by nature.

Pair this with their lively temperament and it comes as no surprise to learn that they need lots of space to explore, play and exercise.

Ask any owner and these are simply a necessity to keep one happy and healthy.

And imagine what these Mustelids are like when kept together as a group.

It’s going to get quite animated, pretty quickly.

Digging deep burrows, hunting, charging around, and playing with each other is what they are known for in the wild.

They’re not remaining docile for very long, at least.

There are, of course, other terms used that are regularly used to describe ferrets, and their social dynamics, that are helpful to learn and be familiar with.

Below is a quick overview of key vocabulary of note:

Read more: What Is A Female Ferret Called?

Ferrets are very social animals, and actively seek out the company of others. They commonly live in groups in the wild, and owners should look to keep at least 2 as pets or be able and willing to provide plenty of attention.

Nevertheless, ferrets do not like to be alone, which is quite interesting, considering that this is unlike many other of their polecat ancestors, who are more solitary by nature.

Despite their social nature, ferrets are known for being territorial against other groups and ferrets that they are not familiar with.

However, with those in ‘their group’, they like to burrow and sleep together in an enclosed, protected area.

So, there you have it.

A business of ferrets.

But it does make sense given how they generally act and behave.

And ferrets are social animals; who simply need the companionship of others to thrive.

Well, you’ll often see recommendations to keep at least 2, if you do decide to keep them as pets.

And believe it or not.

This makes a group.

So, by owning 2 ferrets you have yourself your own business.