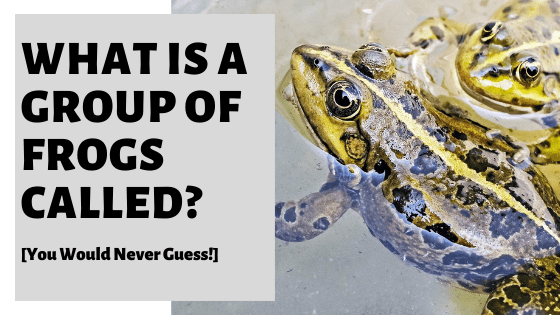 I was observing a group of frogs the other day, and the thought suddenly dawned on me. I didn’t know how to refer to them. I have since researched the terminology and would like to share my findings with you here today.

And it appears that the key to the terminology used, is in the number, the age and the intent of the group.

But an army; why so militant?

Well, one would hypothesize its because they come together in such large groups.

Let us now take a closer look at the group dynamics of these croaking amphibians.

We’ll also be looking at a glossary of other key frog terms that are useful to be aware of.

Do Frogs Live In Groups?

Frogs are very social and will come together routinely in groups. Especially during the breeding season. In fact, frogs are born into the world in groups and spend most of their development with other frogs.

And some species of frog lay huge amounts of eggs at any one time – some have been known to lay as many as 30,000 at one time.

That’s a lot of eggs and potential offspring.

These collective groups of eggs are known as frogspawn.

While not all of these eggs will hatch and develop into tadpoles, there is a collective group that will.

And those tadpoles will stay together too.

At least until they start to develop into froglets.

While they are young, a group of frogs will swim together in schools (just like fish).

And then when adults, they will go their separate ways to live a more solitary life.

But even then they will come back together during mating season.

The males will croak in order to attract the females.

And if they do, well the males will fertilize her eggs.

And the process repeats itself all over again.

There are a range of interesting terms that are used to describe frogs, and their various life stages. Below you will find the most common ones:

What Is A Female Frog Called?

What Is A Male Frog Called?

An army of frogs.

And if you are not fond of that very militant term, then there are others you can use too; colony, cohort, or chorus depending on the context.