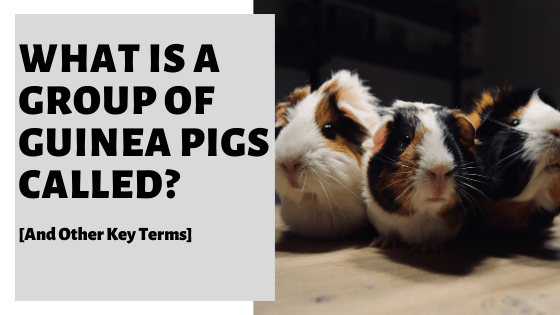 The terminology between different animals and pets can be confusing. The same can be said for guinea pigs too! If you are looking to reference a group of these rodents then it helps to know what they are called, and be aware of the other key terms. This guide should help!

And when we say social. We mean it.

In fact, guinea pigs thrive and do best in groups.

Being alone does not do a guinea pig well.

They simply need the companionship of others to avoid a deep level of loneliness and boredom.

In fact, this study even went on to suggest the effects of long term isolation resulting in either early death or the loss of their natural hormonal production.

Clear indicators that isolation is not ideal for these rodents.

This is why is it recommended to own at least two guinea pigs, at the very least. Or if possible a neutered male and one/two females, two females, or two neutered brothers (if they have been raised together).

Let us now take a closer look at the other terminology associated with these rodents. But, before we do let us just look at how many guinea pigs are commonly found in a group (or herd), in the wild.

How Many Guinea Pigs Is A Herd?

It is generally considered that a group of 5-10 guinea pigs makes a herd.

In the wild, it is common for them to live in close family groups of 10 or more individuals, and then for several groups to come together to form a colony.

Many owners often contemplate whether or not they own a herd, even with 2-4 guinea pigs.

It makes sense given the definition of the term ‘group’:

Its a fair question, and it likely derives from the term ‘herd’ itself.

If we take a look at the definition of herd, we soon see why:

‘Large’ being the important word here.

I suppose it then depends on how you define the word ‘large’.

Here’s one to consider:

So it is relatively subjective.

But, it makes sense that you’re going to need to own 5 guinea pigs at the very least to ‘own a herd’.

If you are looking at keeping guinea pigs, or are fortunate enough to do so already, here are some other important terms that may come in useful:

What Is A Female Guinea Pig Called?

What Is A Male Guinea Pig Called?

Groups of guinea pigs are called herds, collecting of sows and boars.

And that is how you will likely find them in the wild, and how you should be looking to keep them as pets.

Generally, it is suggested to keep as many guinea pigs as you have space for and can afford to raise.

So long as you have planned accordingly, of course.

Besides, several guinea pigs will stimulate one another and encourage active behavior.

Its better for everyone, honestly.