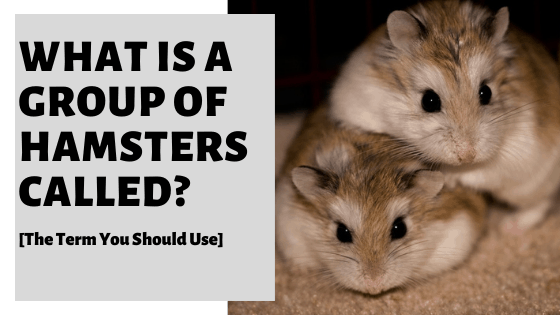 Pet hamsters often live alone. So, it’s certainly an interesting thought to consider them in groups. What would you even call a group of hamsters anyway? And what are some other key terms associated with this rodent? Let’s find out!

If you are planning to keep a pet hamster, you’ll likely be doing just that.

A Hamster, not hamsters.

It is pretty much standard practice to keep to keep a singular hamster, and often comes advised, unless of course certain arrangements are made.

Do you know how hard it was to find an image of a group of hamsters for this post?! That’s why I settled on a picture of two.

Let us now take a closer look at whether these rodents do actually live in groups (at least in the wild).

We will then look at some other important terms for your vocabulary if you are looking at keeping this pet (and want to be aware of all the necessary lingo!)

Do Hamsters Live In Groups?

Hamsters do not generally live in groups, even in the wild. While it is true that some breeds of hamsters are more acknowledging of others, these rodents do best alone.

But you may be thinking; ‘but why are they kept together at pet stores?’.

Its a fair question.

Well, in most cases, hamsters in pet shops are still of such a young age that their territorial behavior is yet to come to fruition.

And, as they are sold so quickly; they are yet to familiarize themselves with their environment and of other hamsters within it!

Its a worrying thought but entirely true, and unless you get the right advice from the store can have pretty tragic consequences for owners who take 2 or more home.

It is once returning home, hamsters begin to settle, that fighting can begin. Territorial instincts can start to set in.

Especially if you have bought only one cage.

But what about the different breeds and group living?

Well, dwarf hamsters are considered to be more tolerable and can be kept in same-sex pairs if raised together and given adequate space.

Even with dwarf hamsters groups consisting of both males and females, or in larger groups, does not usually bode well.

Two breeds that must live alone at the Syrian (also known as Golden) and Chinese hamsters.

Both of which are known to be immensely territorial and likely to aggressively attack one another if kept together.

In fact, this behavior has been recognized in the wild, not just in captivity. Take this research for example.

All Syrian hamsters in the study opted to live in their own burrows – away from others and in solitary conditions – by choice. It’s instinctive to them.

Further research into Chinese hamsters has even shown they instinctively prefer an empty nest and will seek this out over one already occupied.

Interestingly, the term ‘hamster’ has origins in the German word “hamstern” which translates to “to hoard”.

Makes sense, given their they love nothing more that to store large amounts of food in their pouches.

Fascinating still when a group is called a ‘horde’, which is actually not related and goes by a different meaning:

The word horde is often used in reference to a large collection of people, all at one time. Not something you expect from hamsters.

If you want to own a hamster, or already do so, here are some other important terms that may be handy to know:

In fact, this terminology is very similar to that found in guinea pigs.

What Is A Female Hamster Called?

What Is A Male Hamster Called?

Its funny that a group of hamsters has a name, considering that these are mostly solitary rodents – instinctively and out of choice.

There is a reason why they are often kept alone as pets, and something that does actually come advised.

Sure there are ways of keeping a couple of hamsters together, but you really need to do your research to ensure there is no fighting or territorial behavior.

One thing is for sure, this is not the type of pet you’ll ever keep as a group.

Despite people going out in their hordes to buy them, they should never return or be kept, as such.