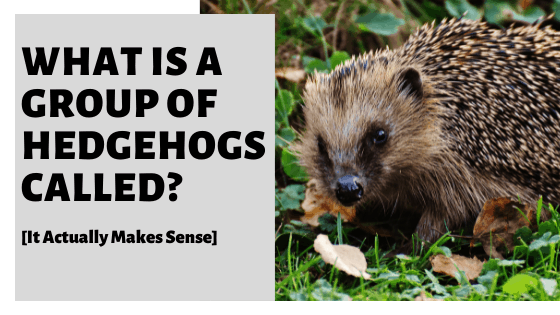 A group of hedgehogs. A rare sight but something that can occur, nonetheless. But what are they called as a collective unit? How would you refer to them? Let’s find out.

There’s certainly a few terms to use, in spite of the fact that ‘array’ is the popular one.

And it appears that different the words used describe a particular aspect of their coming together.

Here is the definition of the term.

‘An impressive display or range of a particular type of thing.’

And as a verb:

‘Display or arrange (things) in a particular way.’

Either way it makes sense.

At least if we take these Oxford Languages definitions of the term.

Hedgehogs rarely come together in groups, as we will see in the next section.

That’s why the term herd is not likely used very often. The ‘coming together of a large group of animals’ – its just not likely.

But it would, however, be impressive to see.

And a coming together of hedgehogs would certainly display in a particular way with all those quills!

Hence the second definition of the term array.

As for the prickle definition; well, thats pretty self explanatory!

Nevertheless, let us now take a closer look at the group dynamics of these wandering small mammals.

We’ll also be looking at a glossary of other key hedgehog terms that are useful to be aware of.

Do Hedgehogs Live In Groups?

Hedgehogs are solitary animals that do not live in groups. However, they do come together at particular times, such as when mating.

Even then, a male and female will not stay together for long.

As long as it takes, really.

It all starts when a male hedgehog finds a female.

They will circle them to engage mating.

After doing the deed, the male will leave immediately. Leaving her pregnant from anywhere between 30-40 days.

Once she gives birth, she will take care of a group of between 4-6 hoglets.

But even then, its not long.

The female will only look after, and feed, her young for 8 weeks.

After that, the young hedgehogs will go off to fend for themselves.

As such, you rarely, if ever, see a large gathering of hedgehogs.

While not very territorial in nature, they are very routine-orientated animals who appear to love a routine.

Hedgehogs are known for visiting and returning to the same areas at similar times.

Perhaps one of the reasons for their solitariness – not really ever needing to cross the paths of other hedgehogs.

If they do – well they will simply tolerate them.

Unless of course there is competition.

Either for food or to mate.

Then aggression can occur.

And as pets, its generally best to keep them alone.

Don’t worry about loneliness or companionship – they do more than fine on their own.

There is a range of interesting terms that are used to describe hedgehogs. Below you will find the most common ones:

If you were to ever see one, of course.

And chances are you will not.

Perhaps the only time you would see them in the wild together is during a mating session.

And disturbing this will likely result in the hedgehogs dispersing.

Whether the male (boar) was able to successfully impregnate the female – well, he’d be on his way anyway.

They much prefer it this way.

So, something to absolutely bear in mind if you did want to own a hedgehog or two as pets.