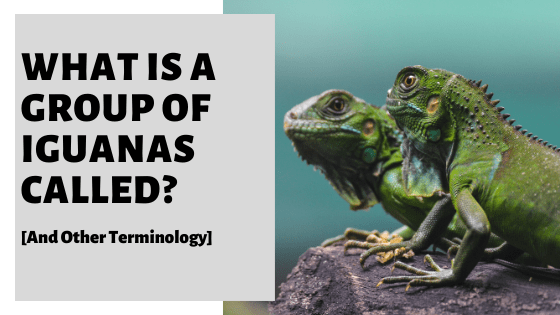 The collective nouns used to describe different animals are rather intriguing. Some groups of animals share similar terminology; some terms are descriptive, whereas others seem entirely random. But what about for Iguanas; how can you refer to them when in a group?

So, what is a group of Iguanas called? A group of Iguanas is commonly called a mess. However, they have also been referred to as a slaughter. Either way, a group of iguanas primarily consists of one male and several females in the wild. Males are territorial and thus do not commonly come together.

For a group of iguanas, we are looking at a descriptive term here.

It is believed they have inherited this word due to the way they typically come together in the wild.

When they do come together, it’s often challenging to observe and differentiate one iguana from the next.

And they get very close together – to breed or to share warmth.

And hence the term.

Let us now take a closer look at the preferences of iguanas; do they tend to live in ‘messy’ groups, or are they more solitary by nature.

We will then be looking at other useful terminology to be aware of that relates specifically to these reptiles.

So if you ever intend on keeping one, you are aware of the key terms!

Do Iguanaa Live In Groups In The Wild?

Iguanas are relatively social reptiles and are known to live in small, mixed-gender groups in the wild, particularly during the breeding season. While a male and several females will live together, it is rare for males to live together in a group.

Males are known to be very territorial, at least where females and mating are concerned.

They actively display they are in control of territory – through head bobbing and patrolling, and will chase away any males that approach.

Females are welcomed, however, and groups of up to ten iguanas (1 male to 9 females) commonly come together. The females will then compete against one another to secure the rights of the male.

And even after mating, male iguanas will typically stay close to the females. They’ll look to eat together and, since they do not hunt, will spend a lot of time keeping warm and foraging in the same spot.

Another time that iguanas have been known to come together is during nesting.

Iguanas will nest individually, but as many as 200 iguanas will gather together to look for the best nesting spots in a particular area. They are, again, competing against one another.

Once eggs have been laid, the young hatchlings and Juveniles will often live in a small family group for the first year of life.

During this time, the male (and father) will often protect the females, using their bodies to shield them from any encroaching predator.

Can Iguanas Live Together?

Iguanas can live together under specific circumstances, but it generally best to keep them alone in captivity.

Housing two iguanas together in an enclosure is challenging, and certain factors need to be taken into consideration, such as their sex, size, age, and also their individual personalities.

We’ve already touched upon wild iguanas, and they do come together when breeding, basking, nesting, and eating.

But in an enclosed environment, it is very different.

It can be immensely stressful to both, or either iguana.

Here are some factors that need to be in place for it to be possible:

While it is certainly possible to keep a pair of iguanas together, it is not a pre-requisite of ownership.

In fact, they can and do very well in captivity when kept alone.

Assuming appropriate care is in place.

Other Iguana Terminology To Be Aware Of

There are other important terms used to describe iguanas – that are interesting to become aware of, and useful to know:

So there you have it – a mess of Iguanas.

It sounds rather strange, right.

But it does make sense when we consider what a group looks like when in the wild and on top of one another!

For those being kept as pets, it’s unlikely a group will ever be housed or kept together.

Although it is possible, it is generally not recommended for most owners.

This raises the question.

How many iguanas are required to make up a ‘group’.

Well, even just two iguanas (a pair) can be classified as a group.

So, there is the possibility an owner can look after their own mess!

Not literally, of course; these reptiles should always be kept in clean, hygienic conditions!