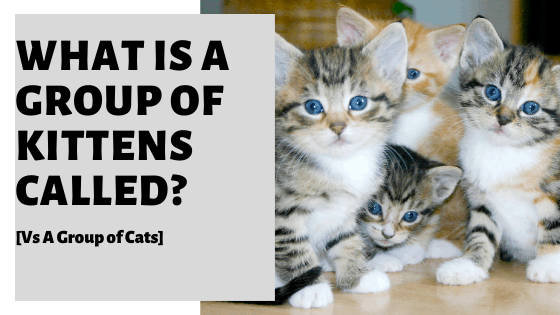 There is nothing cuter than a group of young kittens. But what is this collective group called? What term can be used to describe them? This is what the research says!

And when we say kindle, we are not referring to Amazons book reader here!

Instead, the origins of this word is a little more interesting.

It is believed that it comes through a combination of two words, from two different languages:

This does make sense, but how and why it become associated with kittens, is somewhat of mystery.

We could always look into the direct meaning of ‘kindle’ too.

‘To cause strong feelings or ideas in someone’

They are pretty cute.

So this can apply too, I suppose.

With the term ‘litter’ it is much more straightforward. The meaning, in biology, applies to many animals who bear offspring:

So, we can easily see when this would apply.

And either way, we can use either terms for quite some time.

While it is open to some debate, a kitten is not generally considered a cat until the age of around 9-12 months.

So, you can have a kindle of kittens for quite some time if they come together before this age.

The word litter may no longer apply however, once they are split up from the mother. Unless of course, reference was made back to that specific pregnancy and group.

But what about cats?

How are they generally referred to as a group?

What Is A Group Of Cats Called?

A group of cats is commonly known as a Clowder. Although they are sometimes referred to as a Cludder, Colony, or Glaring depending on the context.

In regards to Clowder, this is in the dictionary purely to describe this group.

Whereas the others are a little more descriptive.

For instance, Glaring is often used to describe cats together in a group, where each cat is not familiar or previously aware of other the other cats before the encounter.

Kind of makes sense when you consider how each cat will likely respond to one another.

Colony on the other hand is commonly used for cats on friendly terms, as would be the case for neighborhood cats who come together regularly.

Alternatively, it has also been known to refer to stray cats as a Colony too – especially those who seek out food together by the trash bins!

There are, of course, other terms used to describe kittens and cats that are interesting to learn, and useful to be aware of.

Below is a quick overview of key vocabulary of note:

There are quite a few terms involved with naming cats, believe it or not.

Kindle or Litter are the main ones for kittens, depending on the context. But the name of the group does change as they become adult cats.

And cats are social animals after all.

In feral conditions, they come together in groups mostly consisting of queens and their litters. But how many make up the group, primarily depends on food availability.

Which begs the question.

How many kittens or cats make up a ‘group’.

Well, it is also true that any kitten or cat that comes together can be classified as a group.

So in other words, a pair of kittens are still a Kindle/Litter, and a pair of adult cats is still a Clowder/Glaring or Clutter.

So you can be rest assured that these are the correct terms to use, either way.