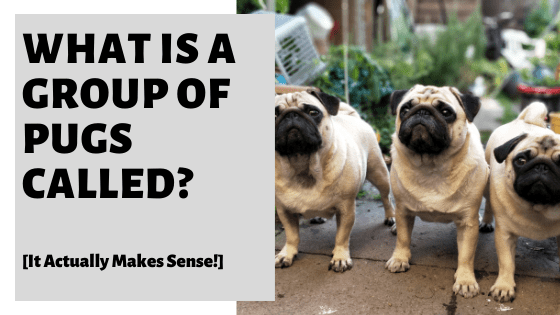 Is there anything cuter than a group of pugs? Well, puppy pugs. But what collective noun can you use for this breed and what term can you use? Let’s find out!

But why have they acquired this name?

Why Is A Group Of Pugs Called A Grumble?

Pugs have acquired the group name ‘Grumble’ in response to the noises they naturally make. Due to their short snouts (they are a brachycephalic breed), these dogs routinely snort and grunt.

And if you own a pug you know this all too well.

These kinds of noises are just a part of life for a pug.

Even if they are playing around the house or are relatively inactive.

And if we take a look for the dictionary definition of the term, we can soon see why:

A group of pugs is called a ‘Grumble’.

But it doesn’t necessarily have to be.

You can quite easily make your own up; focusing on these small dogs’ features.

Besides, that’s where the term ‘Grumble’ came from, to begin with.

Just don’t be too surprised if people do not quite know what you are talking about.

You may need to explain it, at least.