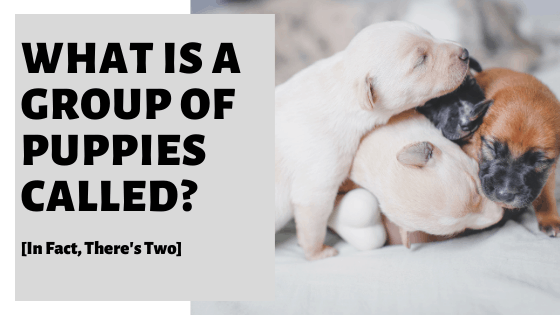 Is there anything cuter than a group of puppies? Perhaps a group of kittens maybe. Nevertheless, how can you refer to this collection of fluffballs? What is the proper terminology to use? Here is what you will want to know.

I’ve even seen them referred to as a ‘cuddle’ or a ‘scramble’ of puppies’.

But these are not commonly used; just that they would theoretically work.

Because most groups of animals are referenced in regards to what they do or some other unifying feature.

Take mischief of rats, for instance.

It’s also why you may see or hear of groups of specific breeds going by different names.

Grumble of pugs anyone?

Nevertheless, what you need to know is that puppies and dogs go through two distinctive phases.

One in where they are together with fellow pups, and one when they come together later in life.

For litters, there can be quite a few in the group.

Besides, the average number of puppies in a litter is between 5-6.

Although it is not uncommon for a litter to consist of 8-12 depending on the breed!

But after they have been separated, and are dropped off at their new home, any coming together with another dog (or more) has a somewhat different name.

And just like you hear with adult dogs too.

What Is The Biggest Puppy Of The Litter Called?

There is no specific word, or term, used to describe the biggest puppy of the litter.

Although they are often described with similar terms and terminology due to how they behave.

Dominant, assertive; these are just some of the more commonly used terms here.

On the flip side, you’ll also here submissive for those puppies who bear the brunt of this social hierarchy.

Dominance is not static. Its fluid and can change.

Thus a dog can be dominant in one setting, submissive in another.

There is not a dog that is ‘dominant’ or ‘submissive’ in nature. It depends on the group and the context.

Other Dog And Puppy Terms To Be Familiar With

There are other important terms often used to refer to puppies – here they are:

Puppies are born into the world in groups.

But they are often soon separated (around the age of 8 weeks) when they enter the care of their new owners.

Up to then, they are a litter.

Afterward, whenever they join up with other dogs, they become a pack.

Unless, of course they meet up with their former litter mates.

In such an instance, you could theoretically still refer to them as a litter.