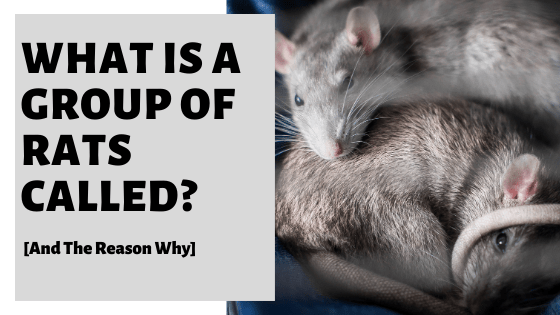 I was looking at a group of rats the other day and suddenly realized I didn’t know how to reference them. I went away and decided to research what the collective noun is for this particular rodent. Here is what I found.

So, what is a group of rats called? A group of rats is commonly referred to as a mischief. Although they are sometimes called a pack, plague, colony, or a swarm.

So there appears to be several different terms to use.

And it gets a little more interesting still.

There is one other group name based on a very particular context.

Its called a “rat king”.

This is when a large number of rats come and get stuck together by their tails, typically due to their conditions and some kind of entangling material.

It could be hair, it could be dirt, or something entirely different.

And this particular group of rats has a very bad association.

In fact, the ‘Rat King’ has been a bad omen for centuries, and is routinely cited in popular folklore.

Nevertheless, a group of rats living collectively in a group do not go by this name.

Its usually a mischief. Let’s find out why.

Why Are Rats Called A Mischief?

Rats are called a mischief, due to how they behave when they come together as a group.

If we look at the definition of the word ‘mischief’ we soon see why.

And there are a couple of definitions too:

‘Harm or trouble caused by someone or something.’

If they are kept as pets, they’re certainly playful with their owners.

If they are wild rats, then they certainly can cause trouble.

In most cases and instances, they are considered pests, after all.

Do Rats Live In Groups?

While there are several different breeds of rats, generally, they are very social rodents.

And for the wild brown rat, they are never too far from us humans.

In fact, they live surprisingly close.

They will actively seek out any potential home that is safe, warm, and close to a regular supply of food!

When it comes to their shelter, they love to build burrows and nests. These can even be up to 3 meters deep!

A simple google image search of ‘rat nest’ will show you exactly what this looks like.

And a new mischief, or pack of rat, are formed quite frequently.

It happens when a male and female go off on their own to reproduce. They generally do so away from an area of another pack.

But they produce up to 5 and 12 pups in each litter.

The largest rat, typically the father male, will lead the group. But as the group gets larger other dominant rats will start to take control.

Should You Keep A Group Of Rats As Pets?

As social animals, it is actually advisable to keep more than one rat. Furthermore, while a pair of rats is a good start, if you can own 3 or more it will be much more beneficial to their health and wellbeing.

Of course, you need to consider the enclosure; it needs to be sufficiently large to accommodate them all.

Equally, you need to consider the sex of the rats.

It is generally advised to keep rats in same-sex groups.

In doing so, you can create a much more harmonious environment and a much less competitive social network.

That being said, males can be neutered. This enables a male and female rat to be kept together without reproduction, or if a male rat is particularly aggressive with others.

Other Rat Terminology To Be Aware Of

There are other important terms often used to refer to rats – here they are:

Read more: What Is A Female Rat Called?

Rats do best in groups.

It’s likely the reason why there are several different names they go by.

But a mischief is the most commonly used.

And its arguably the most appropriate.

Whether in the wild or kept as pets, they certainly keep us humans busy.

And all it takes is 2 rats to make a mischief.

Both metaphorically and literally!