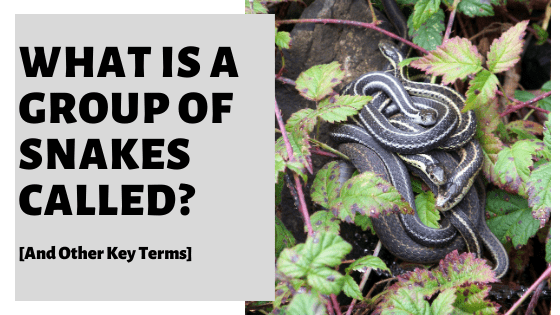 The terminology of different reptiles is an interesting one. It got me thinking; how would you even refer to a group of snakes? I spent some time looking into the most commonly used terms and will be exploring them further here today.

So, what is a group of snakes called? A group of snakes is generally referred to as either a pit, nest, den, or bed. Although, these are mostly solitary (live by themselves) reptiles by nature, and do not usually group or live together except for specific contexts and times.

Unlike a lot of other animals and reptiles, snakes are often called a lot of different things! There does not seem to be one, the unanimous saying used.

It could even be down to language, history, and tradition. As we will soon find out.

Either way, there are plenty of different options; rightly or wrongly.

In fact, I have even seen people make up their own names for a group of snakes. Perhaps the most humorous example is a ‘scream’.

The reason being – it would be the first thing they would do if they came across a group of them.

Nevertheless, let us now take a closer look at the most common terms and some possible explanations as to why they are used.

We will then take a closer look at some of the other important terms involved for the snakes, which can be useful if you are ever looking to own one!

There are generally four different terms that are commonly used to describe a group of snakes – even if they are rarely found together! These are a pit, nest, den, or bed.

Let us now take a closer look at why they may be referred to as such:

A pit is in reference to a snake pit, or a hole filled with snakes. This is a term that has been used in legends and fairytales for generations, most notably in Europe.

For instance, there is a reference to a Viking king known as Ragnar Lodbrok, who supposedly was thrown into a pit of snakes and subsequently died there.

A nest of snakes is another popular term used, and the origins of why could be multiple in reason.

For starters, most species of snakes will lay their eggs (or give live birth to living young) in safe locations, such as protected and concealed holes (crevices, under logs/vegetation, etc. We can see why a nest would be applicable here.

After the laying of eggs, most species of snake will typically leave and never return for their young.

There are one particular species of snake, the King Cobra, who is known to physically build a nest for her young, and defend it against predators.

Again this could be partly behind the origins of the word.

Then we have Den, which is popularly used in the media in reference to groups of snakes collecting together.

In fact, several species of snake are known to gather at certain times, in the setting of a den. This includes ratsnakes and copperheads among others.

Lastly, another popular word used is a bed, and there is little evidence to suggest why this term for a group of snakes became so popular. Perhaps it is in relation to the word nest, almost a synonym of it.

There also appears to be certain terminology used depending on the species, or the activity they are engaging in.

Perhaps the most obvious example is a Rhumba of Rattlesnakes or a coil (for those engaged in breeding).

Below, we take a look at the other important terms often used to describe snakes:

Oh, and one other thing to consider, is that some snakes go by different names.

Take Garden or Garter for instance. The same species, yet referred to differently.

Groups of snakes can go by a range of different names but are most commonly referred to as pit, nest, den, or bed.

In reality, snakes do not come together too often.

In fact, they only generally do so for a specific reason; such as for winter brumation (hibernation equivalent in reptiles), or as a result of breeding.

Typically, dozens of males can come together due to the pre-hormones a female may put out there to attract a mate.

They’ll even pile up to mate with her.

This is otherwise known as ‘breeding balls’ and is common in garter snakes, water snakes, and anacondas.

But ultimately, you’ll never likely need to use the term. They are mostly solitary after all.