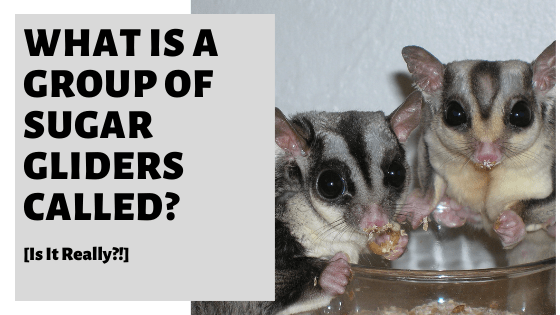 Groups of animals usually go by different names. So, it’s only natural to wonder how to refer to a group of sugar gliders. Here is what you want to know.

The term colony is certainly an interesting one.

Besides, this term has been used to describe other groups too, such as frogs and rats.

In fact, a collection of several groups of guinea pigs is often called a colony too!

So, back to our opening statement.

But when we look more closely as the definition of the term, its easy to see why:

‘A group of organisms of one species that live and interact closely with each other.’

We can thank Britannica for this Zoological definition of the term.

“Interact closely” – they are the key words here.

And sugar gliders certainly interact closely when together.

We will now see why in the next section below…

Do Sugar Gliders Live In Groups?

Sugar gliders are very social animals that live in relatively large groups, of between 6-10, in the wild. Each group will have sugar gliders that are a range of different ages.

And there will be times that a group’s count maybe a few more. This is generally when one or two of the sugar gliders in the group has had young.

If any young are involved, then they will often receive both female and male parental care. Keeping them warm and foraging for food simply require collaboration here, and biparental care is the only way to allow for this.

Interestingly, there have been reports of sugar gliders living alone and being solitary – but this is generally the exception rather than the norm.

Instead, these gliding possums are keen for interaction.

They partake in regular social grooming, hygiene, and bonding -clearly defining their own groups identity to control a territory.

They also communicate regularly with one another through a range of vocalizations (that includes barking and hissing), physical signals and event scents!

Communication is essential to each group.

It enables them to create and establish social order.

Two males will take the lead and be the dominant gliders of the group.

They’ll generally be in charge, but will share food and other resources with the subordinates of the colony.

There is a responsibility on everyone of the group to scent mark!

And anyone who does not carry this scent will be discarded – and sometimes violently.

While violence is not common between those of the same social group, it can occur between gliders of different groups – primarily in response to scent marking.

As such, groups of sugar gliders control and defend their own territory – which usually provides them with all the food they need to survive.

What Are Baby Sugar Gliders Called?

Baby sugar gliders are called Joeys, just like with baby Kangaroos. Female sugar gliders will typically have two joeys in any one pregnancy.

It is believed that they share similar terminology due to the fact that both baby sugar gliders, and kangaroos, live in the pouches of their mothers for around 70 days following birth.

During this time they will feed on the milk of their mothers, and be protected from the dangers of the outside world.

After 10 weeks, Joeys will begin to slowly venture out of the pouch, begin eating solid foods and start growing fur.

Joeys will stay with their mothers up until thy are between seven to ten months old.

Other Sugar Glider Terminology To Be Familiar With

There is a range of other interesting and important terms used to describe sugar gliders, their characteristics, and traits.

Below you will find the most common ones:

A colony of sugar gliders.

That’s what you need to know, and what you came here for.

Nevertheless, the rest of the information presented here was interesting, right?

At the end of the day, these marsupials do best in groups.

This is why they should never be kept as single pets.

They should not be kept as single pets.

And when we consider that a group is usually defined as two or more coming together.

Well, you could have your own colony of sugar gliders.

If you are willing and able, to own them of course!