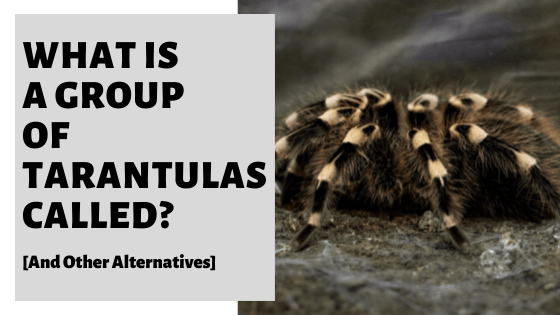 Are you wondering what the term is for a group of tarantulas? I was too. So I spent some time researching to find out. Here is what you want to know…

And if we take a closer look at the definition of the term, we can start to understand why.

At least the one taken from the Cambridge Dictionary:

‘A group of animals, insects, or plants of the same type that live together’

At least, this is the most accurate definition of the term for our purposes.

But is this right?

Well, ‘living together’ is perhaps not quite so accurate (as we will soon see in the section that follows below).

And as such, it is no real surprise that tarantula owners and other arachnid enthusiasts are seeking better alternatives.

In fact, an entire thread has arisen with dozens of entries for potential other, more suitable terms.

And here are just some of the suggestions:

You get the point.

In fact, when it comes to collective nouns, you can be quite imaginative.

Typically, they will describe something unique about the traits and characteristics of that animal.

And for the tarantula- well, there’s quite a few to hone in on.

Do Tarantulas Live In Colonies?

Tarantulas do not live in colonies. Instead, a group of tarantulas is a rare sight and only typically happens at specific times during the mating season.

At least in the wild.

If you are keeping a tarantula as a pet – it is best to keep them alone.

And while this may seem lonely to us humans, it’s what do these spiders best.

Besides, they do not have the complex emotions nor perspective to see it that way.

Instead, these are solitary creatures and can be aggressive or even cabbalistic towards other members of their own species.

And this is actually the norm for spiders, in general.

Instead, the only time you are likely to see a collection, or larger group, is:

When mating, individual males will go out searching for receptive females, identifying them through their pheromones (chemical scents).

But, female tarantulas that are not looking to mate will not leave their burrows and will even repel males with aggression.

Interestingly, if two males come across a female, they will typically not compete with one another for her.

And that leaves two.

And two is enough to meet the definition of a ‘group‘:

A number of people or things that are together or considered as a unit:

From there, the male and female will mate.

Unless she eats him in the process!

There are a number of interesting terms that are commonly used to describe tarantulas and spiders, in general.

These are also good to be aware of. So below, you will find some of the most important ones:

So there you have it – a colony of tarantulas.

If you are happy with that, then that’s the one to use.

But just like many others appear to be doing – get creative and invent your own.

So long as you are descriptive and leverage this spider’s unique traits and characteristics, they should make sense.

Do not be surprised if nobody knows what you are talking about, mind.

What Is A Group Of Spiders Called?

A group of spiders is typically called a clutter or a cluster.