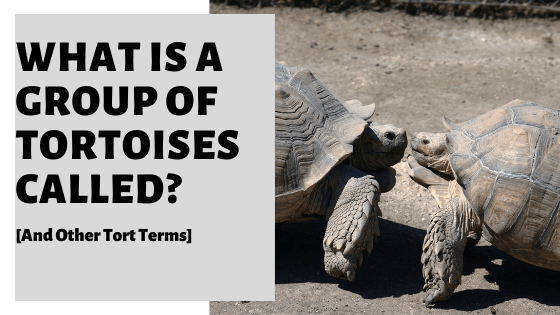 Tortoises are often kept alone as a pet. But what is a group of tortoises known as when they do come together collectively? I spent some time researching to find out!

So, what is a group of tortoises called? A group of tortoises is called a creep. Although, tortoises are mostly solitary in nature and rarely come together as a group. It is only during mating season, or when coming together near a source of food or water, that they are known to really do so.

Let us now take a closer look at why these reptiles have such a fascinating group name before we look at some other important terminology used for tortoises.

It may very well come in handy if you currently, or are ever looking to own one!

Why Is A Group Of Tortoises Called A Creep?

‘Creep’ is certainly an interesting word.

In fact, looking into the origins and why tortoises are known by this term is actually quite a challenging one.

Thankfully, with a bit of digging and research, we can start to see why.

The Executive Director at the Tortoise Group (a non-profit organization set up to educate and improve the welfare of wild desert tortoises), had this to say:

“It’s a bale for turtles and a creep for tortoises. I am sure they could have come up with a better name!”

We can then of course, start to borrow terms from other disciplines.

Take Geology for example, where a ‘creep’ is defined as a ‘very slow moving mass’.

That would make sense too.

But there is an important point to make here.

The actual application of the term ‘creep’ to tortoises, does appear to be somewhat open to debate.

As a collective noun, it is difficult to find out exactly when the term ‘creep’ was first used, how, or even, why.

Nevertheless, it is logical to apply the term in its more logical, and literal sense.

Tortoises creep slowly, and the meaning of creep according to the Oxford dictionary is:

“Move slowly and carefully in order to avoid being heard or noticed.”

It does make sense.

Even if not all naturalists, scientists or the general public do currently use it.

Do Tortoises Live In Groups?

Tortoises do not live in groups; instead being solitary reptiles by nature.

And while there are 49 different species of tortoise, all of which are drastically different in terms of size, appearance, and even diet; they do commonly share this one particular trait..

They prefer to live alone.

Even a hatchling (baby tortoise), will typically start out life on its own, and will continue to do so.

In some species, some mothers may protect the nest momentarily – but they soon diverge and continue there with their own lives.

Tortoises, just as is the case with many other reptiles, have not evolved to require companionship.

They are perfectly willing and able to live on their own terms in the wild.

And, this is true for pets; who share the same biology and natural instincts.

This is why it actually comes advised to keep a singular pet tortoise. And they will not get ‘lonely’. At least in the human sense of the word.

While it is true that some species can co-exist with other members of their own species peacefully; this is the exception rather than the norm.

In fact, pairing two different species together, or even two males of the same species can even cause aggression, fighting, and territorial behavior.

So, keeping tortoises alone is generally advised, as far as keeping them is concerned.

Just know it can be done; but it does require some planning, thought and consideration.

It does make sense that they can in certain contexts. Of course, in nature they will come together at some point, whether this be:

And in this instance, how many tortoises would constitute a group?

Well, at lot less than you think.

A group of tortoises is a collection of more than one. So, even if just two tortoises came together, it would still officially qualify as a group!

So, as an owner, if you keep two tortoises and do ever manage to keep them together, you have yourself your own creep!

Tortoises are fascinating creatures, and as such there is some unique vocabulary and terms that are used to describe tortoises.

Below is a short glossary of key terms that are useful to know:

Read more: What Is A Female Tortoise Called?

The use of the term ‘creep’ when describing a group of tortoises is actually quite logical.

Although, as solitary animals that rarely come together, the term will rarely need to be used or applied.

Probably one of the reasons why it remains mostly unknown.

Chances are, unless you do your research, plan accordingly, and are aware of all the nuisances involved with different species, you are unlikely to ever own a ‘creep’ of tortoises yourself.

At least for any significant amount of time.

That is of course, if you are into your Herpetoculture.

On the other hand, in the wild, a ‘creep’ is something you are unlikely to see. Outside of mating or during certain instances of drinking/feeding, at least.