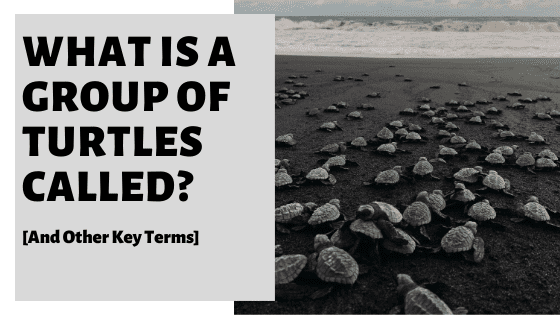 If you keep a turtle as a pet, chances are they’re on their own. But what is a group of turtles known as when they do come together collectively? Well, here is what you need to know.

So, what is a group of turtles called? A group of turtles is typically called a Bale. Other collective nouns include a nest, or less frequently, a dole. Although, the term Arribada has been used to describe the action of a group of sea turtles coming to shore to nest.

We’ve all seen Finding Nemo and can picture the scene with the current.

Now that’s a lot of turtles, and in this context, the terms Bale or Dole would be quite fitting to use.

Alternatively, during the hatching process as young turtles break free from their eggs, then a nest would be much more appropriate.

Why Is A Group Of Turtles Often Called A Bale?

The term bale is an interesting one to apply to turtles, so why is it commonly used?

Well, we can only speculate here, but it likely has something to do with the linkage to the definition of the term:

The meaning of Bale, according to the Oxford dictionary is:

‘A large amount of something such as hay, paper, wool, or cloth that has been tied tightly together’

Added to the fact that the term bale is a synonym for the term pack or bunch.

Why Is A Group Of Turtles Sometimes Called A Nest?

A group of turtles is likely sometimes referred to as a nest in response to the mating patterns and behaviors of these reptiles.

In wild sea turtles, after a successful mating, a female turtle will lay clutches of eggs.

And these really make for large nests.

The average wild sea turtle will lay between 75-125 eggs in each clutch!

But are groups even common in this particular reptile? Is this a term that needs to be used very often?

Do Turtles Live In Groups?

Turtles do not typically live in groups; they are solitary creatures by nature.

And although they do come together from time to time, this is primarily to mate (and occurs between male and female turtles) and during the breeding season.

Even a hatchling (baby turtle), will typically start out life on its own. Once they hatch they soon need to fend for themselves and will continue to do so if they survive predation.

From there, turtles will grow into largely territorial creatures, willing and able to be aggressive if necessary.

In fact, it is believed turtles can sense the presence of other turtles long before they get close.

With excellent eyesight and a sense of smell; they prefer the lone life!

Turtles are rather interesting reptiles, and as such, there are some unique terms and vocabulary used to describe them.

Below is a short glossary of key terms that are useful to know:

Although it is surprising that they have various different group names.

Besides, these reptiles are mostly solitary animals that rarely come together.

But they do in certain contexts, so it’s good to have the terms to hand!