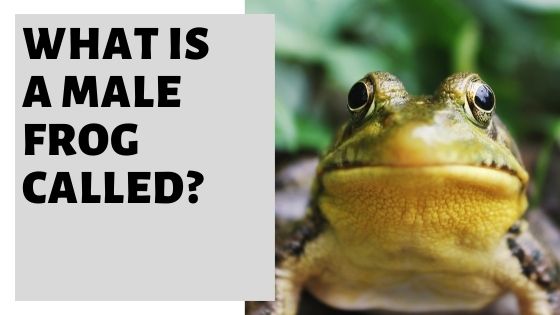 Do you want to know how to refer to a male frog? Are you not sure what term is correct to use? Well, it’s perhaps more simple than you might think.

So, what is a male frog called? A male frog is called a frog, or a male frog – there is no standard or recognized name used to differentiate them from females. However, male frogs may be referred to as a tadpole, or a froglet, depending on their age and the stage of metamorphosis they are in.

Essentially, it’s largely dependent on their development; even then, they share the same terminology with females, too.

So all frogs, male or otherwise, are known as frogspawn, tadpoles, or froglets.

But when is each term applicable?

My life cycle image below will helpfully explain that!

So, this is when to use each term:

What is the difference between a male and female frog externally?

There is no one individual external trait you can use to distinguish male and female frogs, across all species. The reproductive organs of most frogs are inside their bodies and cannot be seen. However, frog size and color are often ways used to tell males and females apart within a species.

Is a frog male or female?

A frog can be either a male or a female.

What is a male toad called?

A male toad is called a toad, or male toad. There is not a recognized or designated name for them, as is the case with females too.

Is a toad a male frog?

A toad can either be a male or a female frog.