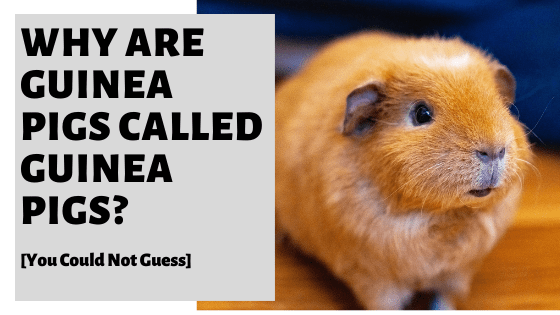 Guinea pig. When you come to think about it, its actually quite a strange name for an animal. But why are they called this? I spent some time researching to find out. Here is what you will want to know.

So, why are guinea pigs called guinea pigs? There is a range of possible explanations and no definitive reason, although it is believed the name is a combination of their historical usage, combined with the noises that they make. Guinea pigs do not come from Guinea nor are related to the Suidae family of animals.

If you were looking for a straight up answer, I am afraid you are going to be dissapointed.

There does not appear to be a clear explanation at this moment in time.

That being said, there are a range of different, and more popular theories which are certainly worth a look at.

Why Are They Called Guinea Pigs?

It is believed that guinea pigs acquired their name as a result of their historical usage in centuries prior. At the same time, the “pig” part of the name is likely the result of the noises they make and by no means their relation to the livestock animal.

But what historical usage?

Well, we know that these rodents were discovered and transported around the world during the 15th century.

For instance, it is believed that Spanish sailors encountered these rodents in their travels, and brought them back to Europe around this time.

Equally, another interesting possibility is the potential links to the ports – which would have been used to dock the ships that transported these rodents back in earlier centuries.

The two ports being in Guiana in South America (these rodents native continent) or Guinea in Africa.

And then there is the word “guinea” which actually was used in common language to describe something that has travelled from far away, overseas.

All of these three are possibilities. Perhaps all of them have some significance.

There is one other interesting theory.

This theory goes that the word guinea originates from a term used to describe an English gold coin – and that’s how much these rodents cost at the time.

However, historical findings make this unfeasible as the coin had not been created or put into circulation by the time this term was used to describe them.

And back to the ‘pig’ part.

Well, guinea pigs are famous for their squeaking noises. And for that, they do resemble pigs.

An association they have come to be joint by.

Are Guinea Pigs From Guinea?

Guinea pigs are not from Guinea; despite the name. Instead, guinea pigs originate from the Andes mountains of South America. Although, many guinea pigs that are kept as pets will have been specifically bred locally and close to where they are sold.

The exact location that a guinea pig is from will depend.

Although due to domestication and the high demand for this rodent as a pet, guinea pigs are typically bred in the country in which they are sold.

And while guinea pigs may originate from South America; pets are often the descendants from a domesticated line.

Why Are Guinea Pigs Called Cavies?

Guinea pigs are sometimes called cavies as it relates to their scientific name. Cavy is simply the shorter version of Caviidae – the scientific name used to classify this family of rodents.

Equaly, Cavia is the genus that these rodents come under, so another potential reason why cavies is used.

Lastly, the scientific name for these rodents in Latin is Cavia porcellus, where porcellus is the direct translation of “little pig”.

There is a reason, or several, behind the name after all.

One thing is for sure – they have been known by this unique and wonderful name for hundreds of years!

Just as is the case with rabbits and bunnies too.