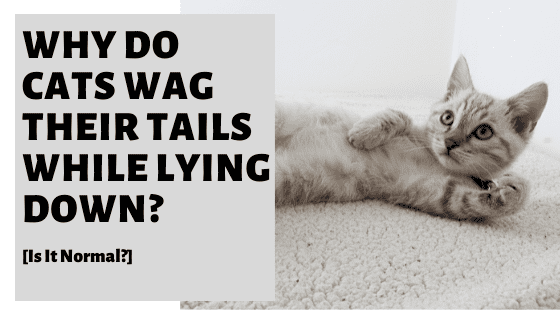 Have you noticed that your cat wags their tail when they lie down? Are you wondering why they do this and if it is normal and common in all cats? Well, it turns out cats actually do this for a number of different reasons. In today’s article, I’m going to explain exactly what those reasons are and if you need to do anything about them.

A cat’s tail is a vital part of its anatomy; it helps with balance, aids focus when hunting prey, and acts as an expressive mode of communication.

When it comes to lying down, the clue is in HOW they move their tails.

As an owner, you can learn to read these movements.

As we shall now explore in the rest of the article here today.

What Does It Mean When A Cat Wags Their Tail While Laying Down?

Cats wag their tail when lying down to express themselves and their emotions. What those emotions are will depend on the individual circumstances.

Cats wag their tails for many reasons, even when lying down.

As an owner, you need to observe the subtle movements and various positions of the tail to accurately read your cats’ moods. So, you are able to determine when something is wrong.

Let’s run through some of the more common reasons why cats wag their tails when lying down:

Dogs are known for wagging their tails when they are happy, but cats do it too!

The movements may not be as vigorous as a dog’s, but cats do show they are happy and content through the position and motion of their tails – you just have to know what to look for!

When your cat comes running up to you with his tail held high in the air, he is very happy to see you!

The tail may even quiver, and the tip might be curved slightly, which is a good sign.

But what about when your cat is lying down? How do you work out the difference between a happy cat that is content lying down in your company and one that is a little on edge?

If your cat is lying down and gently swaying its tail from side to side, it is safe to say you have a happy cat!

Especially if the movements are accompanied by relaxed ears and purring.

You can be certain your cat loves you if he chooses to curl up on your lap or directly beside you, and if the tail begins to ‘stroke’ you, in slow movements, your cat is showing you affection!

Occasionally, cats may also thump their tails on the floor or the sofa when you are stroking them, which could mean they are enjoying your company.

But bear in mind that forceful thumping could mean something else entirely!

It is worth bearing in mind that cats are naturally independent creatures.

Even though selective breeding has made some breeds significantly cuddlier than others! So, a gentle sway of the tail is not necessarily an invitation to be stroked.

Your cat could simply be content chilling on his own!

The subtle movements of a cats’ tail can seem confusing at first, but by observing your cat regularly and paying attention to other body parts too (such as the ears), you will begin to learn the language!

This will not only lead to a more content cat but will also increase your bond with your feline companion.

Just like humans, cats can get frustrated and will have times when they just want to be left alone!

They can become irritated for several reasons, from being woken up to generally just having a bad day!

Too much noise and movement are also likely to stress your cat out.

A tail that is thrashing abruptly in wide arches is a good indication of frustration.

If you attempt to stroke your cat when its tail is moving like this, your presence is probably going to be met with a swipe!

Alternatively, your cat may simply decide to just leave the room and find somewhere else to relax.

Especially if the swishing tail is accompanied by restlessness and subtle moans.

We previously mentioned tail thumping behavior, which is a confusing one as it can mean happiness, but it can also signify that your cat is becoming irritated.

The difference between the two is all down to how hard and fast your cat whacks a surface!

A gentle thump with the end quarter of the tail is considered to be safe.

However, if your cat starts to use its whole tail and the thumping starts to resemble a meaningful slap, then it may be time to move away!

Here are a few other common tail positions that can indicate irritation, discomfort, and even fear, when your cat is lying down:

In a cat’s world, feelings of excitement and frustration are closely linked; they both require a cat to be alert and ready for action!

So, it may be no surprise to hear that the tail movements are similar between these emotions too.

If your cat lies down with its paws tucked under the body and the tail flicks from side to side, your feline has probably spotted potential prey.

Especially if the gaze is fixed and the pupils are dilated. Your cat may even make subtle chirping or chattering noises which indicate excitement.

A side-to-side swish means they are feeling playful so expect your cat to pounce on an unsuspecting object shortly after!

It is important to remember that cats are hunters by nature.

So, make sure you schedule in plenty of play sessions to burn off some of that energy and prevent boredom.

Bear in mind that cats also tend to lie on their backs and expose their stomachs when they are in the mood to play!

Is It Normal For Cats To Wag Their Tail While Laying Down?

It is perfectly normal for cats to wag their tails while lying down, as cats rely heavily on body language to express their feelings. There is a common misconception that cats cannot accurately control their tail movements, but this couldn’t be further from the truth! Only a small number of movements are involuntary.

So, next time your cat vigorously swishes its tail or slaps you across the arm, know that there is a meaning behind it!

Cats can be fairly expressive if you know what to look for.

So, you can observe your cat’s tail movements for any abnormalities or changes which could indicate your cat is unwell, in pain, or suffering from an unseen injury.

For example, your cat may have begun to swish its tail around in dramatic fashion when lying down. If there is no apparent cause for the behavior, then it could indicate a problem.

Especially if the movements appear to be heavy or inconsistent.

Although cats are predators, wild cats are still vulnerable to attack by larger animals such as coyotes and wolves.

They have evolved to be very good at hiding any signs of illness or pain. Remember that cats wag their tails for a wide variety of reasons.

So, if you suspect there may be an issue, you should look out for other signs such as lethargy, loss of appetite, or hair loss.

Generally, you shouldn’t have to do anything when your cat wags its tail while lying down, as it is a behavior that is normal for cats. However, if your cat is constantly thrashing its whole tail or thumping the floor violently, then there may be a problem that needs addressing.

Here are the most common potential causes for this behavior:

Ensure Your Cat Is Not Stressed

Has there been a change to your cats’ environment? Have you added a new pet to the household?

Cats are creatures of habit which means they can be significantly affected by even the smallest change!

So, it is important to find the cause of your cats’ stress and deal with it swiftly.

Cats that constantly feel stressed or threatened may develop chronic stress or even depression which is why it is important to seek the advice of your vet if you are concerned.

Other signs of severe stress can include social withdrawal, excessive vocalizations, and exaggerated swallowing or continuous licking of the nose.

It can be beneficial to invest in a cat-calm diffuser such as Comfort Zone or Feliway to reduce your cat’s stress while you figure out the cause.

Many health problems can cause pain, especially in older cats. Arthritis, cancer, urinary tract issues, bladder infections, and trauma can all cause significant pain, which may manifest as restlessness and excessive tail wagging, among other symptoms.

If you suspect your cat is in pain, you must take it to a vet to be checked over.

NEVER give a cat any type of human medication, such as ibuprofen, as these are highly toxic to cats.

Cats are enigmatic creatures that are not particularly expressive when it comes to how they are feeling!

To make things even harder, every cat is different, and reactions may vary between breeds.

For this reason, you should watch your cat regularly to get to know his usual behaviors and tendencies to tail wag.

When are they most likely to do it? Are there any trends or patterns?

When you begin to notice these things and get to know your cats emotions, you can be more confident in knowing when there is something wrong.

Up next: Why Do Cats Wag Their Tails While Sleeping?