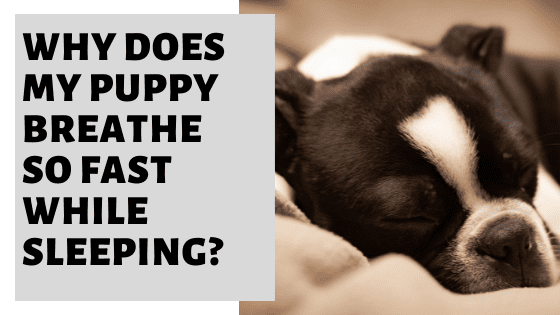 If you have noticed that your puppy breathes fast while he’s sleeping, you may be a little concerned. Is it normal for puppies to do this? Should and if so when should you be worried? What can you do about it, if anything? Here’s everything you’ll need to know.

So, why does my puppy breathe so fast while sleeping? Puppies naturally breathe fast when sleeping, particularly when they are in REM sleep (while dreaming). It is nothing to worry about most of the time. However, In rare cases, medical issues (kennel cough, bleeding in the lungs, or pulmonary edema) can cause rapid breathing and will require prompt veterinary attention.

If your pup is suffering from medical issues, chances are you’ll notice other signs, symptoms, and behaviors.

That being said, you should never take chances.

So this does mean you need to keep a particularly watchful eye over your pup.

The majority of the time, rapid breathing is just something you should learn to expect.

Maybe you have just observed it for the first time, perhaps you’ve just simply never noticed it before.

However, if you do have your doubts or there is any possibility your puppy is suffering from ill health, call a vet.

It’s better to be safe than sorry.

With this in mind let us explore this odd yet interesting response to sleep in puppies and how to respond accordingly.

Is It Normal For Puppies To Breathe Fast While Sleeping?

It is entirely normal for puppies to breathe fast while sleeping. They do so for various different reasons, and it is an innate, natural response that is shared among the breeds.

REM (Rapid Eye Movement) sleep occurs when we dream, and puppies dream just like we do in order to process their day.

You can tell your puppy is in REM sleep when you spot the following in addition to his breathing rapidly:

We don’t know what puppies dream about, but experts believe it’s usually linked to what they’ve experienced during the day.

Just like human beings, if puppies are experiencing scary or exciting dreams, their bodies will react as if they were awake.

This can be seen if they encounter night terrors, which dogs experience too by the way!

Your puppy will obviously be breathing fast if he’s dreaming of running through a field – but no matter what the content of the dream is, you’ll see his breathing speed up.

It can be difficult to spot rapid breathing in puppies as they’re so small, but you can observe your puppy at different times to see if his breathing changes.

Puppies sleep a lot since it’s during sleep that their bodies develop and grow. Dreaming and rapid breathing are, therefore, natural results of this process.

Your new puppy will have much to process when he comes into your home. He may have more active sleep time than usual, which could include rapid breathing.

Puppies may be experiencing a vast array of emotions when they reach their new homes, having left behind their mother and siblings.

Like us, puppies experience stress with big life changes, so they will need time to settle into their new home.

Anxious puppies may be more prone to rapid breathing, both while awake and asleep.

However, they will usually calm down and settle, and their breathing will naturally slow down as they grow.

Should I Be Worried If My Puppy Breathes Fast While Sleeping?

When Not To Be Worried

You usually won’t have to react or respond if you see your puppy breathing fast while sleeping.

You definitely don’t want to wake your puppy in the middle of his REM sleep: this could cause him a lot of stress.

Imagine how you feel when you’re woken while you’re still dreaming – it’s never a pleasant experience!

The only time to be worried is if you suspect a medical issue or that your puppy is stressed or anxious.

If stress is the problem, there are ways to ease your puppy’s anxiety (see below).

It’s also worth bearing in mind that smaller dog breeds may breathe more quickly even when they’re fully grown.

Brachycephalic dogs (such as pugs) have more difficulty breathing in general, so they’re more apt to pant or breathe more quickly.

If you notice your puppy has a swollen belly in addition to his rapid breathing, you might become concerned.

However, a swollen tummy doesn’t necessarily mean there’s cause for worry.

Lots of puppies develop swollen tummies in the following situations:

Note: If you suspect a medical condition, you will need to take your puppy to the vet right away. If you notice any other signs of illness along with a swollen tummy (see below), don’t hesitate to wake your puppy and take him to get help.

When To Be Concerned That Your Puppy Breathes Fast While Sleeping

While most of the time rapid breathing in sleeping puppies isn’t a cause for concern, there are various signs to watch out for which might tell you that something could be wrong.

If you have spotted any of the following in addition to the rapid breathing, take your puppy to the vet right away:

It’s best to take a trip to the vet that might prove to have been unnecessary rather than risk your puppy’s health.

Here are some medical problems to be aware of that can cause rapid breathing while sleeping.

Sometimes rapid breathing (also referred to as polypnea or tachypnea) can be related to lung conditions such as:

These medical conditions are often accompanied by chronic coughing.

If you notice your puppy coughing when he wakes up or when he’s lying down resting, take your puppy to the vet right away.

In some cases, coughing might be a sign that the heart isn’t functioning as well as it should.

If your puppy is struggling to breathe, you may see him put himself in a strange position. You might see him with his elbows spread apart or his head and neck stretched out.

Both of these positions are his way of trying to open his air passages to get more oxygen.

There are other medical problems that can cause rapid breathing, such as:

These conditions are more likely if you notice your puppy breathing rapidly when:

What To Do If Your Puppy Is Breathing Fast While Sleeping

Most of the time, there is little you can or even should do if your puppy is breathing fast while sleeping. Waking them up is an absolute no-no. However, there may be some things you can do in response depending on the underlying cause.

Here’s what to do if your puppy is breathing fast while sleeping and you suspect any of the following situations might be the cause.

If Your Puppy Is Stressed

If you suspect your puppy might be breathing quickly because of stress or anxiety, do your best to make your pup as comfortable as possible in his new home.

Treat your puppy gently and try to establish a routine as quickly as possible so that he knows what to expect and doesn’t get overwhelmed.

Start socialization early, as this can help build your puppy’s confidence which will really contribute towards lowering his anxiety.

Crate training will go a long way towards easing the transition for your puppy into your home.

Ensure he sees his crate as a comfortable and safe space that’s only for him where he can recharge his batteries and feel secure.

Keep training sessions short and sweet when training your puppy for obedience, potty training, and socialization.

Take things at your puppy’s pace as much as you can. Don’t go on long walks just yet, as puppies don’t have the stamina of adult dogs.

Sometimes working your puppy too hard can lead to fast breathing, whether he’s awake or not!

If You Suspect A Medical Condition

If you think there may be a medical reason behind your puppy’s rapid breathing, you’ll usually notice other symptoms such as lethargy, vomiting, or lack of interest in activities.

You’ll also notice your puppy breathing fast around the clock – not just while he’s asleep.

If you have spotted any unusual symptoms in your puppy, bring him to the vet right away.

How To Check Your Puppy Yourself

If, for example, you’ve counted 8 breaths in 15 seconds, 8 times 4 is 32 breaths. 32 breaths per minute falls within the normal range.

If, however, the number of breaths per minute is higher than 34, or if you spot other symptoms, get your puppy to the vet. Your vet may take tests to see if there are any underlying problems.

You can also take your puppy’s temperature and pulse.

A normal body temperature for dogs is between 100 to 102.5 degrees F. Anything higher than that, and they can get heatstroke, in which case they’ll start breathing too quickly.

Be sure your puppy has a cooled-down area where he sleeps so that you can avoid him getting overheated.

Puppies breathe fast when they sleep.

It’s just something they do, and in some breeds, it’s even more extreme!

That being said, it could be a sign that something is up.

And for that reason, you should keep a watchful eye and be willing to contact a vet should you suspect something is wrong.

Most of the time, though, if your puppy is drinking and eating normally and has energy when he’s awake, he’s probably just breathing fast while he dreams of running and playing!

Have other questions about your puppy’s sleep? Well, my following guides may be of help: