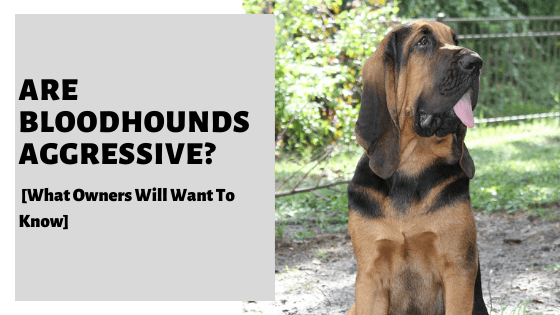 Bloodhounds are a large scent-hound, originally bred for hunting both deer and wild boar. Naturally, you may be wondering with this ancestry if they are an aggressive breed? Do they have certain triggers that can set them off and are they inherently dangerous to be around? I have spent time researching the Bloodhound breed and below would like to give you an overview of their general temperament.

So are Bloodhounds aggressive? Bloodhounds are not known for being aggressive. Instead, they are generally gentle and mild-mannered dogs who are friendly and patient with people, children, and other pets. Just like with any breed of dog, they can become aggressive given certain contexts and factors; such as boredom or feeling threatened by another dog.

Thankfully, there are proactive measures owners can take, and with sufficient socialization and training, aggressive behaviors become most unlikely in this breed.

Contrary to popular belief, bloodhounds are very active dogs, and not the lazy and dimwitted couch potatoes they are often portrayed as on television and in the movies.

As they are the number one scent dogs in the world, it’s no surprise that they will stick to a trail when they get a whiff of something.

Sometimes they become so focused on the scent that it’s hard to get their attention away from it as they stubbornly ignore everything and follow it.

They do have this streak in them; being strong-willed and determined, so it is important that you take control from when they are young in age.

One thing that Hollywood has gotten correct about the Bloodhound, is that they are loyal dogs who love to stick close to their owners.

Let us now take a closer look at the average temperament of a Bloodhound, along with whether or not they are protective.

We will also be discussing some of the contexts or situations in where they may act out more aggressively, and some of the proactive measures you can take to limit or eliminate them entirely.

This will ensure you have a more stable, well-behaved dog – so be sure to keep on reading!

Bloodhounds are very laid-back dogs, especially when it comes to children. They will even allow kids to climb all over them, pull and grab at them, all the while they’ll just lay there and take it!

This, along with some other traits discussed below, makes the breed an excellent choice for a family pet if you have small kids at home.

Because Bloodhounds are extremely loyal to their owners, their gentle nature makes them entirely unsuitable to be guard dogs. They will just try and make friends with anyone who comes on to the property.

Though they may bark when left alone, and they could also become shy and want to hide behind you when someone approaches the house.

Bloodhounds are an affectionate breed of dog and will want to stay close to their family, especially when indoors. Don’t be surprised to see your Bloodhound want to curl up with you.

When they are outside, Bloodhounds love to explore and be independent, but inside they tend to want to stick close to you and cuddle up.

It’s extremely important for owners of Bloodhounds to take the strong leadership role of alpha of the pack. This will take time, persistence and patience but it is required for a well disciplined dog who responds to your commands.

If Bloodhounds are not exercised enough, both physically and mentally, they can have some behaviour problems, including destructive and aggressive behaviour.

So, ensuring that your Bloodhound gets physical and mental stimulation each day is extremely important. Activity will also help form a bond and trust between you and your Bloodhound.

Bloodhounds are not protective dogs as they generally try to make friends with anyone who approaches.

In some instances, they can be shy around strangers so they may tend to back away behind their owners.

When left home alone they can become protective of the house and will bark continuously. This could be out of fear rather than aggression, however.

They are not known for attacking people, even those who may be intruders.

While not protective, some Bloodhounds can become possessive over food or toys, causing aggression in the form of snapping and biting.

This can cause big problems in the home, especially if there are small children and other pets in the house.

What Can Make Bloodhounds Aggressive?

Bloodhounds may not be an aggressive breed overall, but there are several factors that can make a them act this way.

Other than that there are some specific contexts where aggressive behavior can develop unless the situation is appropriately managed. Let us explore these:

One of the biggest factors that can result in Bloodhounds becoming aggressive is that they are bored.

Bloodhounds need both physical and mental stimulation daily to be happy and content. Without this stimulation they can become aggressive and destructive.

Being Alone For Too Long

Because Bloodhounds are such loyal companions, they want to be by your side all of the time, so they don’t do well alone.

Oftentimes being alone can tie in with the point above about being happy and content. If your Bloodhound is with you, they are more likely to be happy and less likely to be aggressive.

Bloodhounds get along with family pets and other animals most of the time, however, they can be aggressive towards other dogs of the same gender.

In most cases this involves other dogs who live outside the home, but there could be issues with other family dogs if the Bloodhound is not socialized and trained properly.

As with any dog breed, and any domesticated animal in general, if a Bloodhound grows up somewhere other than a loving home, and without the proper training and socialization, they can easily become aggressive.

In this case, the behavior comes out of fear and just not knowing any better.

Socialization involves getting your dog used to different people/animals in different environments and situations. It is best done from the time that they are young, and should be done regularly throughout their life. Going to the park, seeing friends and neighbors are just some examples.

Some Bloodhounds can be territorial over their food and toys, which could cause aggression. This could be particularly problematic for small children and other family pets. In many cases this can be alleviated with proper socialization and training.

While it is recommended that you undertake this yourself from the time that they are young, you could also consider taking them to an animal behavioral specialist or dog trainer to support your efforts.

Many owners report that this is required, or extra beneficial, due to the stubbornness of this breed.

Bloodhounds are not protective dogs; however, they can become protective and territorial when someone approaches the home and they are left alone.

They won’t necessarily attack or become physically aggressive, but they will bark and show that they are not happy.

How To Prevent Aggression in Bloodhounds

Preventing aggression in your Bloodhound starts from the time that you bring them home. Its not complicated, but it does require persistence and a desire to meet your dogs needs.

Below, we outline some of the best methods to implement:

As with almost all breeds of dogs, early socialization and training are so important for Bloodhounds.

The breed does much better with positive reinforcement and reward training than with stern training and discipline. They can act out if faced with negative behavior towards them.

The breed can be slow to pick up on training, despite their intelligence, so getting them started as early as possible will benefit everyone.

If you currently or have previously owned another breed of dog, you’ll just need to be mindful that your Bloodhound isn’t going to learn at the same pace.

Don’t allow yourself to become frustrated at the amount of time it takes your Bloodhound to grasp things.

Allowing your Bloodhound to be part of a loving family will also help prevent aggression in the breed.

Family life ties in with the socialization aspect of training. Ensuring that your Bloodhound knows that they are safe and loved, but they don’t run the household is very important.

Set boundaries early and let your dog know what is, and isn’t, acceptable.

Being alone will cause boredom, as they won’t be able to do much, and in turn that will cause aggression and destruction.

Your Bloodhound always needs something to do, whether that’s getting some exercise with some play time, or going for a walk and being allowed to sniff a scent trail.

There are a variety of things that you can do to mix up play time and exercise for your Bloodhound. As scenting will tire them out just as much as running around will, you can even tire them out inside if there is bad weather outside.

Bloodhounds are extremely laid back, even tempered dogs, who are very loyal and patient, especially when it comes to children.

Though they may be able to go with the flow, they still want there to be flow. Unlike certain misconceptions about Bloodhounds, they are very active dogs.

Being active is one way to keep Bloodhounds from being aggressive. They need both physical and mental stimulation to keep them from becoming bored and destructive. If they are not getting enough exercise, they will become destructive and aggressive.

Bloodhounds are hunting dogs, and while many may not go hunting these days, they still like the work of catching a scent trail and following it.

While this is good for the Bloodhound, you’ll need to keep an eye on them as they can become oblivious to everything around them, including dangers, when they have their heads down following a scent.

When you are outside with a Bloodhound, always make sure you have them on a leash, or in an enclosed space. This is just to protect them from wandering off on a scent trail, and not because they can become aggressive to strangers.

Bloodhounds are stubborn dogs who want to do things their way and will try to take charge. The breed needs owners who will take charge and let the dog know who is actually in charge and will be firm, in boundaries but not discipline.

Training a Bloodhound will be a longer process than it is for most other dogs. It takes the Bloodhound longer to grasp onto things, but when they do, their intelligence really shines through.

Bloodhounds make great family dogs, especially for families with rambunctious children. Bloodhounds have so much patience with kids that they’ll basically take anything the kids throw at them.

The breed is also a great choice if you are a first-time dog owner.

So long as you take care of your Bloodhound, give them sufficient attention, physical and mental activity and stimulation, never punish them, and seek out the support of an animal behavioral specialist or dog trainer, you should have no problem with this breed is displays of aggression.