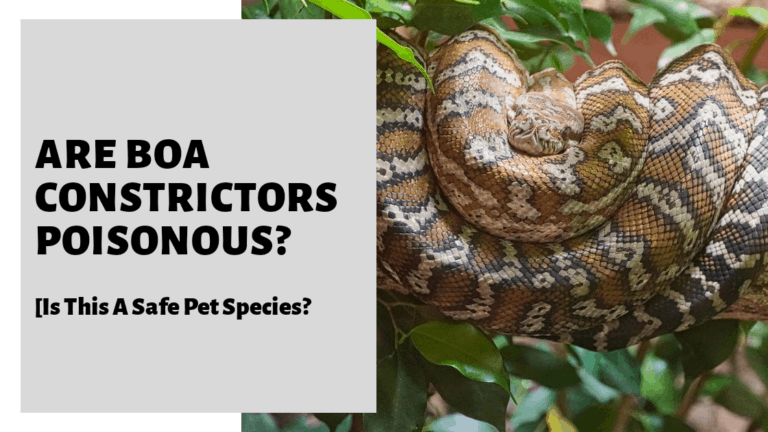 Boa constrictors are one of the most common snakes to keep as a pet. But, if you’re looking at getting one, you’ll want to know whether it is poisonous or not. Needing to know this information myself, I researched all about boa constrictors to find out. Here is what I was able to discover.

So, are boa constrictors poisonous? Boa constrictor snakes are not poisonous, nor are they venomous. However, boa constrictors are large and potentially dangerous. While not generally aggressive, they may bite in self-defense if they feel under threat or in danger.

Boas kill by squeezing their prey tightly until blood flow completely stops circulating to vital organs, including the brain.

Therefore, if you are looking to own a boa constrictor, you need to be very careful and vigilant – they are also not suitable for young children.

You should also never look to catch a wild boa constrictor.

Thankfully most of the time, a boa constrictor will not actively seek out a human to attack.

Generally, they like to feast on live rodents, which you will need to provide if you intend to keep one as a pet.

Let us now take a closer look at this species of snake.

We’ll be covering some important topics like how they kill if they are aggressive and if they can kill humans, so be sure to read until the end!

As their name suggests, boa constrictors kill their prey by squeezing and ‘constricting’; the blood flow in their prey.

They essentially wrap around the victim and squeeze tightly until the victim ceases life.

Boa constrictors can kill their prey due to their sheer size, being one of the largest species of snake in the world.

An average boa constrictor can reach up to 14 feet in length, weighing around 20-35 lbs.

Boas are known to grow quickly from a young age.

Females are known to grow larger than males, so this is something to take into consideration.

Either way, boa constrictors are not poisonous, nor are they in possession of any venom.

Due to nature and anatomy, they have developed instincts and are swift in their attacks.

Despite their size and weight, they can strike quickly, grabbing at their prey with their sharp teeth.

Boa constrictors have several rows of teeth used to grip prey and prevent them from getting away.

From there, they use their bodies to coil around their prey and squeeze very tightly.

Snakes can feel for breathing and vibrations, so they know when their victims are gasping for air and still breathing.

A boa will squeeze its prey over a period, and they will tighten more as time goes on. They do so until their prey has died.

For a long time, people thought that boa constrictors suffocated their victims.

Recent studies suggest it is actually through a drop in blood pressure and blood’s inability to get to the brain that most prey is killed.

Despite their large size and abilities to kill, boa constrictors are not considered to be aggressive.

This is why they have been able to be domesticated.

That being said, like most animals and other snakes, boa’s can become aggressive in specific contexts and situations. One such example is when they shed their skin.

During this time, boa’s are vulnerable, unable to see, which is how they primarily understand their environment around them.

As you can imagine, without seeing during this time, their aggression is a mere defensive act to protect them while they are most vulnerable.

For this reason, if you are to keep one as a pet, you need to be aware of when they shed their skin and generally stay away from them and give them adequate space during this time.

Snakes are solitary reptiles, so do not ever feel like they need your attention; they would prefer to be alone.

Despite not generally being aggressive, these are not suitable to keep with children.

As you can imagine, children are much more likely to provoke a boa and are a much easier target for a boa attack.

Boas will not see them as humans, just a much smaller target.

Additionally, due to their sheer size, a boa’s bite can be excruciating and can pierce the skin if they can make contact.

Boa constructors can kill humans; they have the power and the ability to do so through the constricting method discussed throughout this article.

However, and thankfully, domesticated and pet boa constrictors are unlikely to attack, cause harm or attempt to eat a human.

A boa cannot consume and digest a human whole. Phew.

This does not mean that they cannot harm you. It just means that they are not inclined to do so without reason.

If a snake feels threatened or in danger, it may instinctively attempt to defend itself through a bite.

Alternatively, if you hold it incorrectly or are particularly unfortunate, a boa can accidentally hold onto you too tight and cause some local swelling and bruising.

Wild boas are another matter, and they should never be approached! The risk of attack is much higher.

It’s important to remember the power and abilities which boas have.

It would be best if you always remembered the potential dangers.

For example, Boas can open their mouths 4-5x the size of their head to latch onto prey.

This is due to the elasticity of the skin in this area.

As you can imagine, a boa would be able to get a sizeable bite into you if it did decide to do so.

Other Potential Snake Based Safety Issues

As we have already touched upon, the main challenges involved with keeping a boa are its size and biting risk.

There are, of course, other things to consider.

First and foremost, you need to be aware of Salmonella and other types of bacteria that snakes inherently carry.

Salmonella is found on reptiles, with snakes being one of these.

You will likely hear of getting Salmonella from raw and uncooked food, but you will suffer from diarrhea, headaches, high fever, and stomach pain if you were to contract it.

In unfortunate cases, it can it get worse.

Therefore, you need to be very careful when handling your snake, and you also need to clean out their cage (properly disinfecting it) regularly.

This includes everything inside their habitat, whether this is water bowls or other items.

Otherwise, you risk getting an infection, especially if you have any open wounds and cuts.

It’s always a good idea to wash your hands frequently with a pet.

For a snake you should do so before and after you handle them, or touch their enclosure or anything inside.

Taking this a step further, be sure never to touch your face or prepare food having touched your snake without cleaning your hands.

You’ll also want to keep your snake away from such areas that food is kept, prepared, or served.

Boa constrictors are not poisonous or venomous, which is good to learn if you are looking to get one as a pet.

That being said, these are large snakes and have the potential to be dangerous. While they are not aggressive, they can bite and attack if they feel under threat. They are solitary and prefer being alone.

If you have young children, this is likely not the snake for you.

However, if you research thoroughly, take their needs and requirements into consideration, and know how to look after them safely and effectively, they could be a suitable pet snake for you.