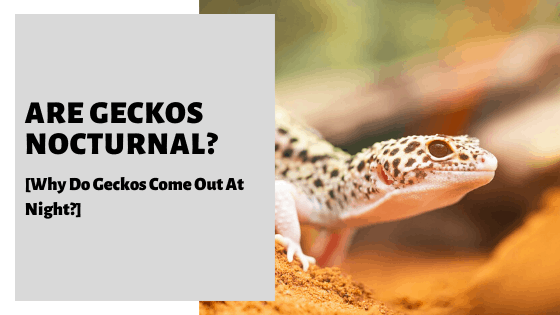 Geckos are one of the more popular exotic pets to keep, especially for those who like reptiles. However, when it comes to taking care of a pet, whether they are active or sleep during the night can make a big difference in how you look after them. Geckos are interesting in this respect, so how do they fit into this equation? I decided to conduct some research into and around the topic. Today, you’ll be able to access this information.

Owning a nocturnal pet comes with a wealth of considerations and requirements. It may sound like a challenge upfront, but with a bit of strategic planning ahead of time, many owners are able to make this work without too much hassle or inconvenicne.

Let us now take a closer look at the instincts of a gecko, and why they would even need to come out at night in the first place. We will then look at what you would then expect a nocturnal gecko species to do in the day.

Lastly, we will be covering some of the diurnal species of gecko if you were more interested in reptiles that live more accordingly with our own schedules.

Why Do Geckos Come Out At Night

Geckos, by design, are more active at night. Nighttime is when they hunt for food, mate, but equally, the darkness helps them to hide from predators.

By design, geckos are prey for the likes of rodents like rats, snakes, larger reptiles and birds of prey.

Being active during the night is generally safer for a small lizard like a gecko, and as such, they have evolved and have acclimatized in many ways too benefit during this period of time.

Their agility, speed, and ability to hide are all benefits that geckos have acquired to escape or go undetected from potential predators.

At night geckos avoid the heat which can be overbearing, this is especially beneficial to geckos from desert environments.

Keeping cool helps these lizards to go about their business more effectively, it also means that they can get away with going without water for longer; which is harder to come by for some wild geckos species and how they likely evolved.

Geckos, like all nocturnal animals, have developed particular physical adaptations that allow them to move around in the dark more efficiently.

The eyes of geckos become more prominent, and their pupils widen to help them collect more light.

The retinas have rod cells that turn each cell’s nucleus into a light collecter. The rods of humans and non-nocturnal animals function differently.

Geckos have an excellent sense of smell, and they can communicate through the use of scent markings. This keen sense of smell comes from the Jacobson’s organ (also known as the Vomeronasal Organ).

The Jacobson organ gives nocturnal animals a keener sense of smell, and it is located in the roof of their mouths. When they pull their lips back as if to smile, it enhances the way this organ functions.

What Do Nocturnal Geckos Do During The Day?

Geckos are very curious reptiles, and naturally, people want to know what do they do during the day because you don’t see them very much.

Geckos, being active at night, means that they sleep during the day. These lizards hide in a variety of locations during the day, including small crevices, behind paintings, cupboards, under entertainment units, anywhere that they can remain undisturbed and cool.

This is why if you own a pet gecko, it is imperative that you set up their habitat with plenty of hiding places. This will give them plenty of places to sleep and get the rest in which they need.

You’ll also need to ensure that closely mimic and resemble natural hiding places. You want your gecko to have an association with such places. This is why you will often find caves, rocks and other such examples on marketplaces like Amazon.

Its important to be aware that for nocturnal gecko species, like leopard, crested and fat-tailed geckos, they will be most active at twilight periods (around dawn and dusk)

Geckos will then sleep on average for around 12 hours during the day; waking up intermittently and mostly around the twilight periods. However, not all species of geckos will sleep for the same amount of time, and there will be some minor differences even within the same species.

When they do sleep, geckos will either sleep alone (if being kept alone – which is fine as they are solitary reptiles) or next to one another (if you are keep a group). Even if you keep a group they may even sleep in their own areas; which too is perfectly possible and normal too.

Many species of geckos do not have eyelids; so knowing whether they are actually asleep is difficult to tell. However, there are some signs to watch out for including:

In the wild, geckos will seek out shelter to sleep, including under leaves and tree barks. This protects them from potential predators, and even when you keep them as a pet in captivity, they will still act on instinct and attempt to do the same.

If your gecko is confident in their surroundings and environment, they may even sleep out in the open. But this is the exception rather than the norm.

Some geckos will look to sleep in the same spot each day, whereas others may regularly move. Again, this will vary between species and the particular gecko.

As previously mentioned, some daytime geckos exist; these geckos are of the genus Phelsuma.

Most of the Phelsuma geckos are diurnal. These geckos originate from Mauritius, Madagascar, and other islands in the western Indian ocean.

Day geckos were first introduced to Hawaii and South Florida. Diurnal geckos are mostly green with blue, yellow, or red markings, and they range in length from 3 inches to 12 inches.

Some Phelsuma geckos are nocturnal but are somewhat active during – whether that is to feed, drink or bask in the day. Let’s observe geckos that are active or moderately active during the day:

You will find this species on the island of New Caledonia as well as Koumac. The Eurodactylode gecko is not widely known.

These geckos live in the lower divisions of tree trunks in their forest environments. These reptiles are tiny, typically, less than 6 inches, and this includes the tail.

This gecko is nocturnal, but it does feed, drink, and sometimes moves around during the day.

You won’t find this species for sale too often. This species is entirely diurnal, and it is native to the Caribbean Islands, Central, and South America.

These little guys are, on average, around 6 inches in length. The males are much larger than the females; they also bare more striking colors than their female counterparts.

This species can climb rough surfaces but doesn’t have adhesive lamellae on its digits- so it cannot climb glass.

This species is tiny and comes from Africa. They are generally not seen for sale. These lizards like to bask for warmth, making them heliothermic as well as diurnal.

This gecko is for the most part, nocturnal; however, they are often seen basking in the sun during the day.

The Moorish gecko is about 6 inches long and native to Southern Europe and North Africa. Moorish geckos change their colors, becoming brighter at night. This species likes to eat invertebrates, and you can find them under porch lamps hunting prey.

What Do Geckos Do When Awake?

You might be surprised to learn that some hardy species like the tokay gecko and leopard gecko may occasionally become active during the day, despite being nocturnal lizards. You can observe this behavior with geckos that are housed in habitats that lack natural daylight.

Regardless of whether the gecko species sleeps during the day/night; they will both have a set of behaviors during their active hours and while awake.

Here are some of the behaviors you can expect from pet gecko:

There are numerous upsides to owning a gecko; many types are small; they are relatively easy to feed and affordable. For the most part, geckos have gentle temperaments, and if you like a quiet animal, geckos are usually very quiet.

If you were wondering whether geckos were nocturnal, you’ll hopefully now know that most species. Like many nocturnal creatures, geckos have developed certain physical traits to help them stay safe and move more efficiently at night. Nocturnal geckos have big eyes that can spot insects from afar, they also have a very keen sense of smell, and they can communicate through the use of scent markings.

Many nocturnal geckos make excellent pets; the leopard gecko, for example, is quiet, robust, and relatively easy to maintain. They have pleasant temperaments and are very easy to tame. Nocturnal geckos require regulated heating equipment.

Day geckos on the other hand, also make excellent pets – they are awake during the day, so you can enjoy observing them. Their needs are similar to nocturnal geckos, as they require high humidity regulated heating equipment and UVB light. Day time geckos have very delicate skin, so you must refrain from handling them unless it is necessary.

All geckos, whether diurnal or nocturnal, make excellent pets. They are especially ideal for people who do not have much time on their hands.

These lizards are not the most interactive; however, it is enjoyable watching them thrive but make sure that you do lots of research before making one of these geckos a permanent resident in your home.

Is My Gecko Sleeping Too Much?

So long as your gecko is eating, drinking, showing signs of activity during the night, and is not presenting any signs of ill health, your gecko should be perfectly fine. The amount of sleep a gecko requires and undertakes can vary between species and individual geckos. Usually, it’s nothing to worry about. Setting up cameras/staying up to observe your gecko are some things you can try to ensure they are moving okay and checking that they are in good general health.

Can You Handle Your Gecko During The Day Or Night?

Nocturnal geckos should not be disturbed during the day while they are sleeping. Similarly, holding a gecko during the night is equally challenging if they are not used to being handled. It’s best to attempt to hold a nocturnal gecko a couple of hours after waking. The more you handle them during this time the easier it will be and less stressful for them.

Can You Change A Nocturnal Geckos Sleeping Pattern?

While you could by manipulating the light and temperature of the habitat, this is not recommended. It will lead to stress and long-term disruption of their circadian rhythms/cycles (sleep/wake cycles). Therefore it is not recommended to attempt to do this.