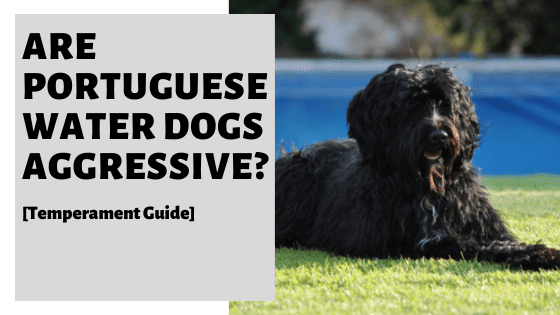 If you find Portuguese Water Dogs an attractive breed to potentially adopt as a pet for your family, you’ll want to know if they’re aggressive. Do they get along with children, other people, and other animals? Here’s what you’ll want to know to make an informed decision.

In fact, this is a breed with a lot of favorable qualities, as we shall soon see in the next section.

But as with any dog or animal for that matter – aggression is something that is possible in certain contexts and circumstances.

We’ll be covering when aggression could be displayed and how to minimize if not entirely prevent them, should you proceed to take a Portie in!

What Is The Typical Portuguese Water Dog Temperament?

Portuguese Water Dogs are affectionate, energetic, and playful in general temperament. They are typically great around people of all ages.

Let us look at the several aspects that make up the typical Portuguese Water Dog temperament.

Your Portuguese Water Dog is a clever, thinking dog who needs mental stimulation.

Get him into agility sports, water work, or advanced obedience training. Play lots of highly energetic fetching games, as he is a natural retriever.

If you are after a couch potato dog to chill out with you on the sofa most of the time, this breed isn’t for you.

Portuguese Water Dogs have boundless energy, so they crave lots of physical exertion every day.

This dog loves to play, so make sure you provide lots of activities for him.

He especially loves long walks and sometimes runs. If you have a body of water accessible to you, your dog will be delighted to explore it: he is a keen swimmer and diver!

If you have a boat, your dog will be thrilled to accompany you, too.

A Stable And Sensitive Dog

Emotionally, Portuguese Water Dogs are stable and sensitive animals. They are fairly even-tempered: their default setting is mostly always set to play!

These dogs need experienced owners to handle their strong wills.

Although they are highly intelligent and can be trained well, they do have a healthy sense of their own self-worth.

A Sense Of Humor

Portuguese Water Dogs can have quite the sense of humor, with a propensity to mischief if they aren’t kept entertained and stimulated.

Some dogs have played cute tricks on their owners, such as:

Good With Children And Strangers

If you have socialized your dog as a puppy, your Portuguese Water Dog will be friendly or polite with strangers.

He will also be good with children, as he loves to play and run around, so he will lap up attention from your young ones.

Portuguese Water Dogs aren’t as territorial as some other breeds, so you shouldn’t find your dog wanting to guard favorite toys. He’ll usually be all too happy to share.

If you have anyone in your family with allergies, Portuguese Water Dogs are considered hypoallergenic.

Good With Other Animals

Usually, Portuguese Water Dogs get along well with other animals, particularly if they have been raised alongside them.

These dogs don’t have a powerful prey drive, so they won’t tend to want to hunt down cats or other smaller animals. They may be tempted to herd them, though, if they are in groups!

Portuguese Water Dogs don’t tend to bite – except for nipping and biting when playing as puppies. If you have socialized your dog as a puppy, he shouldn’t nip or bite you as an adult.

This is why Portuguese Water Dogs make very good watchdogs but not guard dogs.

As watchdogs, they are highly observant, and they can sound the alarm by barking or growling if they feel danger is near.

However, they won’t attack an intruder: they’ll let you know that something is wrong so that you can be the ‘backup.’

You will want to know, though, that even if these dogs tend not to bite, they usually remain a bit ‘orally fixated.’

They will pick up anything and everything in their path, from edible to inedible objects.

They’ll also try to gnaw on your hands – not from aggression, but because they are natural retrievers, and they enjoy having something in their mouths.

You can easily keep your Portie from mouthing your hands by having a toy box handy so that he always has something suitable to carry around.

There are several things that can bring up problem behavior in Portuguese Water Dogs, though most of these behaviors don’t result in aggression towards people.

Portuguese Water Dogs are highly intelligent and full of energy, so they need lots of physical and mental stimulation every day.

If this breed of dog is left alone for too long, he will get bored and may then get up to destructive behavior.

He may chew furniture or dig up your yard – not out of anger, but because if you haven’t provided him with things to do, he’ll think of something himself!

Insufficient Socialization As A Puppy

If your dog hasn’t been socialized as a puppy – introduced to new people and other dogs from an early age – he can develop fear or anxiety.

As a breed, Portuguese Water Dogs don’t do well in households with lots of unfamiliar people coming and going.

Therefore, it’s even more essential to socialize these dogs from an early age to get them used to strangers.

An anxious dog can nip or bite not because he wants to attack others but because he’s afraid and concerned for his safety.

Sometimes an adult dog will nip or bite because he hasn’t been taught as a puppy that this isn’t an acceptable form of play.

Puppies will nip and bite each other as part of their rough and tumble games or when competing for their mother’s attention, but they quickly yelp or squeal to let each other know when someone’s biting too hard.

If your dog is ill or hurt, he can’t tell you what’s wrong. But he will want to protect himself and even conceal what he perceives are signs of weakness.

As such, you may notice your dog more reserved, or even defensive or protective of certain parts of their body.

If you notice an abrupt change in behavior in your normally loving dog, it may be that he needs medical attention.

Take your dog to the vet if you notice any of the following have suddenly cropped up:

How To Prevent Aggression in Portuguese Water Dogs

Although this is not an aggressive breed, it’s important to bear the following points in mind to help keep your dog happy and prevent aggression.

Socialize Him From An Early Age

From the day you bring your Portuguese Water Dog home, start socializing him so that he is used to other people, animals, and situations.

Puppy training typically starts from as early as 8 weeks, and your puppy will thank you for it. These dogs love to learn!

If you can bring your puppy to classes with other dogs, all the better. An experienced puppy trainer can help you get the very best from your puppy right from the start.

Take your young puppy out and about with you – to busy streets, to friends’ houses, to the shopping center, etc.

The more exposure he gets to new stimuli as a young dog, the happier and more confident he’ll be as an adult.

As mentioned earlier, Portuguese Water Dogs are happiest when they are busy playing, walking, running, swimming, or engaged in something that makes them think (such as agility skills or obedience training).

Play lots of retrieval games with your dog: he is a very enthusiastic retriever, as it’s in his nature to pick things up. He will be eager to burn off lots of his boundless energy with you!

If you have children, put them to work entertaining your dog: they can expend all their energy while having a lot of fun together.

If you have a body of water nearby, take your dog for regular swimming trips.

Portuguese Water Dogs used to help fishermen retrieve lost tackle, drive fish into nets, and even deliver messages from one boat to another.

Don’t worry if the water is cold: these dogs are used to ice-cold water. Portuguese Water Dogs used to work off the coast of Iceland!

Be Mindful If His Emotions

Portuguese Water Dogs are sensitive dogs who will easily pick up on the emotions of the people around them.

Although they are very resilient physically, they do best in calm and friendly environments without too much emotional chaos.

If you want your dog to stop doing something, use positive reinforcement to reward the behavior that you want.

Even soft forms of punishment can affect these dogs emotionally and can make them fearful (and then they can potentially lash out later).

Generally speaking, Portuguese Water dogs are not an aggressive breed.

Quite the contrary, particularly when they are well-trained, well-raised, and well-taken cared for.

As such, these dogs make excellent family companions. You can really make the most of your this breeds loyalty and desire to play.

Just consider their size before you proceed to get one. While they are classified as medium-sized dogs, they do get pretty big!

Nevertheless, don’t let this put you off.

Portuguese Water Dogs will form strong bonds with their people, so when you’re happy, chances are they will be content too.