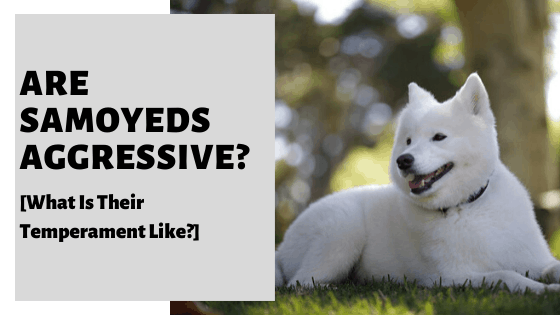 The Samoyed is a large dog, initially bred to hunt and one of 14 ancient breeds that is genetically similar to wolves. As such, it is only natural to wonder whether they are aggressive. What is the average temperament of this breed and what are they like to own?

So, are Samoyeds aggressive? Samoyeds are not considered to be aggressive dogs. Instead, they are generally gentle in nature and make a dependable and loving family pet. They are also intelligent and easy to train; which can help ensure they remain obedient and follow command. However, like any dog, a Samoyed can become aggressive during certain times, environments and contexts. While aggressive behavior is rare, the main causes include: when they are in pain, have been provoked, or are in fear of a person/other animal.

Samoyeds are a beautiful and popular breed among dog owners. When you hear someone who says they have a dog that is aggressive, you automatically assume they mean that their dog is a biter.

Nobody wants to have a pet who inspires fear in friends, family, and strangers at the dog park. Samoyeds tend to bark a lot, likely why some believe them to be unfriendly, but they could not be more wrong.

Traditionally, Samoyeds were bred to protect the livestock of the Samoyedic people of Siberia. Now they are popular all over the globe, thanks to their adaptability, stunning looks, and wonderful nature.

When looking for our new family dog, the Samoyed was one in which we considered.

I spent a lot of time researching and investigating into the breed to see whether they would be appropriate for our home.

I’d like to share all that I was able to find regarding their tendency to become aggressive here today.

What Is The Temperament Of Samoyeds?

There are many good things to say about this breed’s temperament. They are independent, demanding, humorous, mischievous, polite, loving, social, playful, smart, dependable, protective, nosy, and loving.

Their sense of humor is known to especially make an appearance during times of disobedience.

The AKC (American Kernal Club) even describes this breed as a graceful and highly functional dog.

Anyone lucky enough to call a Samoyed their friend will be aware that it is always playtime for these fun pets.

Even as they age, Samoyeds still enjoy their time to play. They almost always have a “smile” present, and although some can be slightly reserved with strangers, most consider everyone to be a friend they just have not met yet.

Samoyeds who grow up with kids are extremely loyal and protective of them. They consider children to be their favorite playmates and take their job of protecting their charges very seriously.

In times of danger, they will not leave their side. Being so intelligent, Samoyeds are sensitive to moods, and discord within the home greatly upsets them.

They are good with other animals in general, but this breed also loves chasing anything from cats to rabbits to birds thanks to their innate herding instinct.

They require plenty of exercise, so running in any form excites them to no end. With such boundless energy, your pet needs a constant positive outlet to get rid of it, they can become destructive.

Samoyeds need obedience training from an early age to prevent them from being a danger to themselves, especially in cities where busy roadways are a concern.

What Can Make A Samoyed Aggressive?

Samoyeds are not aggressive dogs by nature but there are circumstances where they may act out aggressively.

It is important to note that any breed of dog can become aggressive. It could be from anything like protecting their food from another dog to reacting proactively to danger to their humans.

In certain cases, there can also be medical issues that turn an otherwise adoring pet into a more aggressive one.

Almost every wild creature will be aggressive if there is a threat to their babies (or another family), their territory, or themselves. Years of domestication have reduced this behavior in most pets, in most circumstances. However, a Samoyed will still protect what they consider to be theirs.

Many people also mistake aggression for something else. Being highly playful, when a Samoyed is with other littermates or dogs, they entice them to play by jumping on them and biting.

Often when this is done to humans, we think they are becoming mean, when all they really want is a vigorous workout.

Aggression can also be a domination issue. It could be a “leader of the pack” type of thing, or it could be of sexual nature. When you have a dog as a pet, it is essential that they recognize your authority as leader.

This comes from training at an early age to establish your role in the hierarchy. If the aggression is sexual, for the males of the species especially, having them altered makes a huge difference.

The age for having this surgery done is up for debate depending on who you speak with, so talk to your vet about the best time to get your Samoyed spayed or neutered.

There are several other types of common aggression and understanding them is the key to knowing how to deal with them.

Is There Anything I Can Do To Prevent My Samoyed From Becoming Aggressive?

The best way to prevent aggression in your Samoyed is by training.

From the time you bring your pup home, you should already have a plan in place for obedience training.

Whether you are planning on attending doggy obedience classes, or you can complete the training without help, it is crucial that you are able to control your pet.

Start by taking your Samoyed for short walks and car rides from a young age. This gets them used to a variety of different sensory experiences that could cause them to act out in later years.

Walks will also encourage their natural curiosity to interact with people and other animals. If you keep your Samoyed isolated, you are only looking for fear aggression to appear.

They absolutely must know simple commands like “no, sit, stay, and down”. If someone is walking by with their kids or dog and your Samoyed starts to chase them, the natural inclination is to run.

This will be perceived as a “chasing” game and you can fully expect your pet to take off after them barking loudly. Not only could this endanger your dog, it could also cause accidental injury to people and other pups.

Many people are afraid of dogs and not all of them have ever been bitten by one. Imagine how scared you would be to see this huge animal running after you and barking!

A sturdy fence is critical for your Samoyed. This way you can prevent unauthorized visits from other dogs, wildlife, or people that may cause your dog to show aggression to what seems to be trespassers. Prevention is always the best way to avoid any issues.

What Can I Do If My Samoyed Becomes Aggressive?

If your Samoyed becomes aggressive, you need to know why in order to correct the problem.

The first step in dealing with aggression is to observe what is going on.

Is it something that only happens with certain people or other dogs?

I had a Samoyed who would constantly bark at my neighbor’s son with her fur standing straight up. Since she was the friendliest dog with everything else on the planet, I wanted to know why.

It was not until months later that a friend mentioned seeing the young boy throwing things at her. Then the aggression made sense.

After speaking with my neighbor and many supervised visits by her boy, the aggression went away. Although my dog was never his biggest fan, they did reach a mutual understanding.

There are also many dog trainers who specialize in dog aggression.

If you know for sure that the issue is not medical, it is worth your time and money to have one of these trainers spend some time with your Samoyed.

In about 99% of the cases, they are able to get to the root cause and work out a plan to deal with the problem. No one wants to get rid of a pet without trying everything they possibly can to discover what is going on.

Some of these trainers will even keep an animal for a week or more to really understand what is going on with your dog.

Samoyeds do not even make the list of the top 20 when it comes to dog breed aggression.

They are known for NOT being aggressive. Thank goodness, they’re not the smallest of dogs.

However, like any other animal, humans included, under the right conditions they could show aggression.

The two biggest things to remember are to find out what is causing the behavior, and once that is determined, stop it in its tracks.

This way you will have a wonderful member of your family for their entire lifetime!

Samoyeds are not considered to be vicious dogs and are not known to bite. However, like in any breed, the Samoyed may become vicious if they feel threatened or trapped. It is therefore essential that owners respect the needs of their Samoyed and refrain from putting them at unease in any situation. Socialization is equally very important and should be done with other people, and animals from a young age.

Samoyeds are very friendly and personable dogs. They get along with most people and other animals, especially those within their households. As they are herding dogs by nature, they may chase or nip, although this behavior can be trained out with persistence, time, and patience.

Are Samoyeds Easy To Train?

Samoyeds are considered easy to train. This is because they are highly intelligent, functional, and like to please people. Training is easiest and most effective when started early – during a Samoyeds puppy years. However, an elder Samoyed can still be trained, it just may require some extra work.