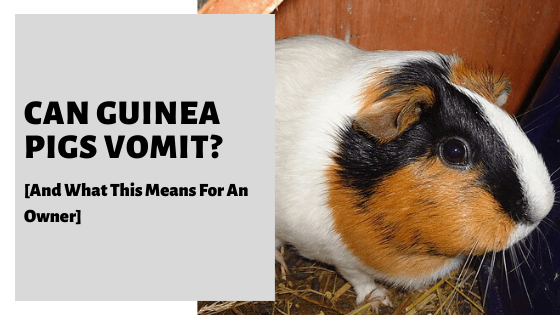 Most animals will vomit as a means of getting something out of their system. There’s a lot of benefit in being able to do so; and it is usually a natural safety response. But what about Guinea Pigs; are they able to gag or throw up? Is there anything that you need to know or be aware of as an owner? Curious, I decided to do some research on the topic. I would like to share my findings with you here today.

So, can guinea pigs vomit? Guinea pigs are unable to vomit (throw up). They lack the bodily functions and brain circuits to be able to respond with this reflex. Therefore, consuming something toxic, or experiencing a blockage or choking, can be fatal. For this reason, it is imperative as an owner that you ensure that you are providing appropriate care and that you are feeding your guinea pig correctly and with the right foods and serving sizes.

Guinea pigs are a part of the rodent family, and believe it or not, all members of this family are generally unable to throw up. This includes the likes of hamsters.

However, guinea pigs can often burp out certain things from their stomach or throat which does give us owners a sense of reassurance.

That being said, you do need to be careful. Let us now take a closer look at some of the potential dangers and hazards of not being equipped with this reflex. Then, we will look at what you can do as an owner, in the event that they were to consume something they shouldn’t have!

Can Guinea Pigs Gag Or Throw Up?

No, guinea pigs are physically unable to gag or throw up. But why is this exactly?

Guinea pigs have certain body characteristics that prevent them from being able to do so. A less muscular diaphragm, thin muscles under the chest and lungs, and a tight stomach are all partly responsible for this inability.

Researchers have also found that guinea pigs do not respond to a provoked feeling of nauseousness. This means that they lack a gag reflex and therefore lack the brain circuits required to vomit.

With this information in mind, you need to be aware of specific risk factors for a guinea pig. Equally, owners can often wonder what the other signs are for their cavy being sick or unwell.

Without being able to vomit, its not as evident as is the case with other pets and animals. This lets you know that something is wrong and that further examination may be required.

Your guinea pig just cannot display they do not agree with something that they have eaten.

Thankfully, there are some signs you can watch out for which can indicate a problem and help you to take an appropriate course of action. We will talk through these in the section below.

Signs To Watch Out For

The fact that guinea pigs are unable to throw up can be quite concerning to an owner.

Most mammals, including us humans, typically throw up when we have ingested something harmful, toxic or poisonous or something that has gone rotten/bad. Throwing up rids unwanted toxins from our bodies.

You can usually tell when an animal has ingested something harmful since they would usually throw up.

Guinea pigs, on the other hand, are unable to instantly get rid of a potentially harmful substance that they may have ingested. There is equally no obvious sign that something is wrong.

So what are some signs you can look out for which may suggest all is not well with your cavy:

If you notice that your guinea pig has all of a sudden become a lot less energetic than normal this may be a sign that something is wrong.

Lethargy is one of the first things that guinea pigs will display when they are feeling unwell.

Common behaviors of a lethargic guinea pig include; sleeping a lot more, hiding as well as showing a general lack of alertness.

Guinea pigs are known to eat quite a bit.

If you notice that your guinea pig is not eating as much or is not eating any of its food then this is definitely a sign for you to take your pet to be examined.

If your guinea pig is poisoned then they may start to drink a lot of water.

They would do this in order to do what they can to rid their body of the position.

If you notice that your guinea pig has a dirty coat this shows that they are not grooming and cleaning themselves as much as they would normally do.

This is a sign that they are unwell and therefore are not paying much attention to their grooming and appearance.

Its usually because they have put this priority on the back-burner – spending the energy and attention elsewhere. Usually to other behaviors to help them feel better.

The ingestion of toxins can cause serious health complications to your guinea pig.

Symptoms of the ingestion of a toxic substance will normally include rapid breathing which can show heart or respiratory trouble.

If you see this you should take your pet to the vet right away as it is a sign that your guinea pig’s condition is quite serious.

Foods That Are Toxic To Guinea Pigs

So now that you know all about how guinea pigs are unable to throw up and why it is dangerous, let’s go over some foods that are toxic to guinea pigs.

Its important to be aware of these foods and never to feed them – not even in smaller quantities or irregularly.

The ingestion of these foods can cause serious and immediate health problems. Remember, your guinea pig has no prompt way of getting rid of them from their system just like other mammals can.

Some common foods which are toxic to guinea pigs include; meat, dairy and particular vegetables.

You should not feed your guinea pig any meat-based products.

The digestive system of a guinea pig is not set up to digest anything other than plants.

They don’t have the GI tract equipment to digest even a small amount of meat, or much protein for that matter. Any consumption of meat at all can make them seriously ill.

Like with meat, the GI tract of a guinea pig is not meant to be able to digest anything other than plants.

Guinea pigs do not have enzymes that are required to digest dairy products – such as lactase which is required to break down the milk protein lactose.

Any dairy product can do a great amount of damage to your guinea pig’s system so make sure to avoid them!

Particular vegetables – those that can cause gas and bloat should also be strictly avoided.

Gassy vegetables include cabbage, cauliflower, broccoli, beans among others.

These vegetables are known to us humans gas after consumption, but we generally able to much better handle and release it. Guinea pigs, on the other hand, cannot process it and release it like us. They are unable to get rid of it and the extra gas can lead to a lot of pain.

Other Foods Guinea Pigs Should Not Eat

There are lots of foods that guinea pigs should not eat, some of which are listed below. Make sure that you know exactly what food to steer clear of or otherwise you are putting your guinea pigs health and well-being in danger.

Vomiting is also a way to prevent choking in many animals; so guinea pigs are more susceptible to this happening. For this reason you need to be especially careful with your cavies environment and the food types and sizes that you provide.

Its important to keep any choking hazards far from your guinea pigs; and also ensure you are not accidentally keeping any risks in their cages.

One to be especially careful of is bedding. Some types, styles and materials used for bedding can be easily ingested and can get caught in the throats of a guinea pig.

One of the worst offenders is any bedding product that uses cotton.

Instead, you should be looking to use a safe bedding, designed with rabbits in mind. We use Kaytee Clean & Cozy which is completely dust-free and also is able to reduce potent odors. Its available on Amazon for a great price too.

Beyond bedding, you also need to be careful of wires or anything small around your home they may come into contact with.

So, if you are looking to let your guinea pig out of their cage – first inspect the area and move items out of reach. Also consider getting a play-pen where you can completely control the environment and let them roam stress-free.

Lastly, be careful with the foods you offer and their serving sizes. Even healthy foods can be an issue. Its a good idea to cut up larger pieces of food before offering it to your guinea pig(s) to ensure they cannot choke or get lodged in your pets throat.

What If Your Guinea Pig Is Just Sick?

There is of course, the possibility that your guinea pig suffers from an illness or is generally unwell.

There are several illnesses that guinea pigs are susceptible to.

The most common are:

Most of these issues can arise due to inappropriate care, and most of these occur unintentionally.

This will prevent the buildup of germs and bacteria which can lead to Respiratory Infections and Pneumonia. These are some of the most dangerous illnesses for pet guinea pigs.

Stress, including overcrowding, pregnancy, and the presence of other illness, can lead to infections. Young guinea pigs are in most danger.

Should your guinea pigs display and signs or symptoms (as outlined in the section above – lethargy, thirst, lack of appetite, difficulties breathing etc) then the best course of action is to visit a veterinarian immediately.

You don’t have much time with an unwell guinea pig so you need to get them seen to as fast as you can.

This means that you will need to be observant and extra careful.

Thankfully, you should also now have a good understanding of some of the possible symptoms guinea pigs may display something dangerous is ingested and some of the most dangerous foods that can lead to health complications.

Ultimately, most guinea pigs are easy to take care of and are generally in good health. While they do suffer with minor health issues that can become fatal if left untreated, with appropriate care these can be largely avoided.

Just be sure to use safe bedding, offer appropriate foods and be careful of choking hazards. This will reduce the risks greatly.