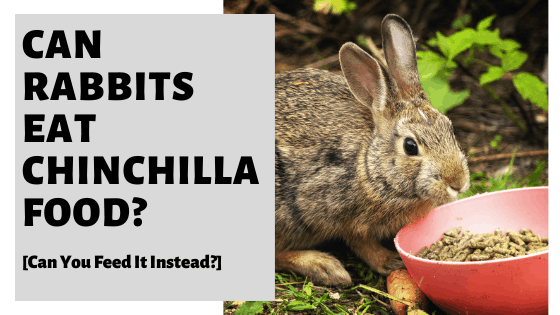 When you own a rabbit, you may wonder what they can eat apart from rabbit food, especially as we tend to project our desires for a varied diet onto our pets. We may wonder if rabbits can eat food for other similar animals, such as chinchillas. But can rabbits eat chinchilla food safely? Read on for everything that you’ll need to know.

The number one cause of diseases in rabbits? A poor diet!

So it’s essential that you get it right.

But what’s so problematic about feeding chinchilla food to rabbits?

Is Rabbit and Chinchilla Food The Same?

But let us see why they are formulated so differently.

Chinchillas need a diet low in fats (between 2 and 5 percent) and carbohydrates and high in fiber (from 15 to 35 percent). They also need between 16 to 20 percent protein.

Chinchillas mostly eat 80-90% high-quality grass hay (80-90% of their diet), which can be in pellet form, though they always need access to fresh hay. Their pellets have no seeds, no nuts, or dried fruit. Their diet is best supplemented with fresh produce – dark, leafy greens.

Chinchillas can occasionally have small amounts of dried fruit, nuts, or seeds, but only as a treat every once in a while, as these foods are fattening for them. They are not designed to eat these kinds of food, as they mostly eat grasses in the wild.

Rabbit food is mostly hay or grass (about 80%), but their diet also consists of fresh vegetables, and they need a variety of nutrients.

Adult rabbits need 10% protein per day, which is about ¼ cup of high-fiber pellets per five pounds of body weight.

Both rabbits and chinchillas can eat fresh vegetables, but chinchillas are better off with small amounts of dark green leafy veggies such as cilantro or parsley.

Rabbits can eat a wide variety of vegetables, not only dark greens, although dark greens are very good for them.

And like chinchillas, rabbits shouldn’t be given too many nuts, seeds, or dried fruit, as these foods are high in sugars, and rabbits can easily put on weight when given these foods that they wouldn’t tend to eat in the wild.

Foods high in sugars can also cause the growth of bad bacteria in the gut, leading to digestive problems.

Rabbits, therefore, require fresh vegetables and hay, and they have higher protein requirements than chinchillas, which is reflected in their food.

Bunnies who live outdoors tend to burn more calories, so their protein needs are closer to 16 percent.

A difference in protein of 4 to 8 percent might not seem like a lot, but that excess protein can have a huge impact over time on your rabbit’s health.

Some chinchilla foods even contain less protein than your rabbit will need, which can also lead to complications.

Protein deficiencies are associated with many problems in rabbits.

A third thing to bear in mind is that rabbits aren’t good with sudden changes in their diet.

A rabbit’s digestive tract is very sensitive as well as complex, which means that any necessary change should be done gradually, and only if absolutely necessary.

In fact, if you suddenly start feeding your rabbit a different food, or even worse, the wrong food, your rabbit’s balance of healthy bacteria in their gut will be thrown out of balance.

This imbalance can lead to bacteria producing gas and toxins, which could cause serious illness or even death.

Rabbits have a natural yet unusual way of making the most of the nutrients in their food.

They engage in a practice called coprophagy, meaning that they eat their own feces at nighttime (usually when you don’t see it.

The reason they do this is that their feces contain vitamins B and K as well as protein.

So provided your rabbit is given the right food, there’s no reason why they shouldn’t have good health.

What Would Happen If A Rabbit Ate Chinchilla Food?

In the short term, your rabbit may suffer from digestive upset, noticeable via its general demeanor and stools. In the long term and with repetitive and consistent feeding, you may notice issues that arise from protein deficiency.

Let’s look at exactly what would happen if a rabbit ate chinchilla food and therefore was taking in either too much or too little protein.

What Happens With Too Little Protein For Rabbits

If your rabbit doesn’t eat enough protein, they are at the risk of:

It’s, therefore, crucial to get the levels of protein right with the appropriate rabbit food.

What Happens With Too Much Protein For Rabbits

If your rabbit is getting too much protein, they are at the risk of:

You can see that a rabbit’s digestive tract is highly sensitive, so it’s worth getting their food right.

Along with chinchilla food, and other inappropriate animal foods like hamster, guinea pig, and gerbil food, there are actually a number of specific vegetables that can be dangerous. Many of these contain toxic compounds that can cause serious harm if ingested.

There are several vegetables that rabbits shouldn’t eat:

What You Should Feed Your Rabbit Instead

Now that you know what your rabbit shouldn’t eat, here’s what you should feed your rabbit instead.

You’ll be happy to know that your rabbit can eat a wide variety of foods that are easy to come by.

The Best Food For Your Rabbit

Start by making sure your rabbit has plenty of fresh hay available every day. Remember that you want to give your rabbit grass hays, such as timothy or oat hay.

If your rabbit is younger than 7 months, you can also feed them some alfalfa hay (but not once they’re older, as this hay is too rich in calcium for older rabbits).

You’ll want some high-quality pellets, as well, that are specially formulated for rabbits, particularly for younger bunnies, as pellets are nutrient-rich and will help them grow.

Your rabbit’s diet will be mostly hay, with the pellets providing extra nutrition. A rule of thumb for older rabbits is ¼ cup of pellets per 6 pounds of body weight.

More pellets than that can lead to weight gain in older bunnies, as rabbits require different nutrition at different stages of life.

Fresh Vegetables For Your Rabbit

Note: Try to feed your bunny organic vegetables when possible, especially leaves and things like carrot tops which can be heavily sprayed with pesticides.

Here are some veggies your bunny will love:

You can also feed your bunny some kale, spinach, and mustard greens, but limit these to one or two times a week.

These vegetables are high in oxalates (salts from oxalic acid) which can cause toxicity over a long period, though they are rich in nutrients and rabbits love them.

Nothing wrong with an occasional treat!

Chinchilla food should not be given to rabbits.

It’s just not optimal, in any sense of the word.

Besides, it was designed for a different animal entirely.

And these animals are fundamentally different, after all.

Chinchillas are omnivores (eat both plant matter, and animal matter).

Rabbits are herbivores (who do best on plant matter and foliage).

So do remember this.

And feed your rabbit accordingly.

Wondering if any other type of pet food is suitable for your rabbit? Check out my guides below to find out: