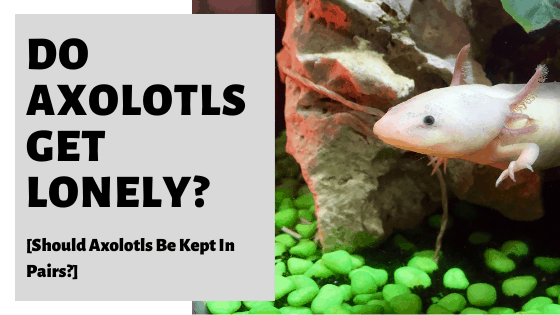 Keeping a singular Axolotl is very rewarding and great fun. But what about for the Axolotls themselves? Are they able to live alone, or can they suffer without the companionship of another Axolotl inside the tank?

So, do axolotls get lonely? Axolotls do not get lonely, and you can keep them alone in a tank. In fact, this is advisable. Axolotls are solitary salamanders by nature, meaning that they live alone in the wild. It is only during specific contexts, such as breeding season, that they get together.

Keeping an Axolotl is certainly a cause for excitement.

They’re fascinating to watch for sure. Even keeping just one is enough.

It’s all very well for us owners – and it’s easy to forget about the needs of our pets, to begin with.

At some point, we all begin to consider the feelings of our pets.

And the ‘smiley’ salamander that is the axolotl is no exception here, even if they do live in a tank.

That appears to smile, that is.

And this all poses another important question and deeper issue; do axolotls even have feelings at all?

Let us now take a closer look at how you should be keeping them before turning to that million-dollar question from which this whole topic of debate ultimately lies on.

Axolotls can live alone, either without another Axolotl, or any other fish, in their tank.

In fact, this is the standard practice due to their solitary nature and preference for living by themselves.

Here is what solitary means, for reference:

‘Solitary animals are those that spend a majority of their lives without others of their species, with possible exceptions for mating and raising their young.

Although they may be kept in research laboratories all over the world, studied for their regeneration abilities and their evolution, they are most commonly kept alone.

And back in their natural habitat in lakes around Mexico City, they will be living in this way too.

Besides, they are critically endangered after all. They have little choice!

Nevertheless, you’re actually more likely to encounter issues by trying to cohabit axolotls or other marine life together.

And here is why.

First and foremost, different organisms have different needs and preferences for their environment.

Axolotls are amphibians and thrive in specific and cooler temperatures – around the 60-65°F range (15°C – 18° Celsius).

Fish generally need to be kept in similar temperatures to their native environment, just as is the case with axolotls.

And while there are some fish, such as the Goldfish, that may do better in the water temperature ideal for an axolotl; there are other reasons they should not be housed together.

Some owners even feed their axolotls smaller fish as part of the diet.

Of course, if a fish is too large, they’ll likely stay away from them.

Too large, and it could even go the other way!

But then you have the issue that comes with competing for space and other resources in the tank (including oxygen).

This is only likely to result in stress and can have a big impact on their health and longevity.

Lastly, we have to consider that other marine life can introduce bacteria or even disease into a tank.

Many fish, for instance, often carry parasites and other nasty viruses that can be transmitted, either to an axolotl or even a human.

Then there is the contamination of water that can happen from different species living in the same water.

Everyone living in the tank needs to excrete their waste, and in a confined container such as a tank – it has nowhere to go.

So, essentially keeping different organisms together is a very challenging one to successfully do. Optimizing conditions requires a lot of careful thought and consideration.

For the most part and for most owners, it’s typically not even feasible.

So, it is generally best to keep an axolotl alone.

And when we say alone, this does not mean to be left and neglected on the part of the owner.

It simply means in a tank by themselves.

An owner still needs to ensure that their axolotl receives the utmost care and has everything they need to truly thrive.

Should Axolotls Be Kept In Pairs?

Axolotls can be kept in pairs, with certain caveats: they are adults, have sufficient space, are of sufficient size, and of the right gender combination. Otherwise, it is generally recommended to keep them on their own.

We’ve already touched upon the fact that they are solitary by nature.

So we know that they are more than willing and capable to do so.

But whether or not you could keep two axolotls successfully together will primarily depend on their age, size, and their sex.

Let us now take a closer look at why these factors need to be considered.

Axolotls are known for being more cannibalistic (will to eat each other) at certain ages.

For instance, this commonly occurs in the Juvenile stage (once they reach 2″ in length and more), and during this time, they are more likely to attempt to eat one another.

This does settle down in the adult phase (and when they reach 5″ in length and more), although introducing two adults (who have lived separately and perhaps independently) up until this point is unlikely to be preferable for either.

There are also other reported ways to limit cannibalism, such as introducing particular foods, but it does require utmost vigilance on behalf of the owner.

While this goes hand in hand with their age in many ways, axolotls should be of sufficient size to be able to be housed together.

As we see above, they should be at least 5″ and above.

Both axolotls will need to be of a similar size too.

If there is too much of a difference between the two, it could result in aggression or territorial behavior.

The gender of the axolotls kept together is an important distinction too.

For instance, if you were to keep a male and a female together, then you would likely see attempts for the male to reproduce with the female.

But a male would be persistent, and this has been known to shorten the lifespan of the female.

So, if you do want to keep axolotls together, it’s best to identify genders before any housing.

All in all, if you did want to house more than one axolotl together, getting a sufficient size tank (20 gallons and above) and giving them ample space is an absolute pre-requisite.

Do Axolotls Have Emotions?

Whether or not axolotls have emotions is certainly a challenging one to call. At present, there is little research or studies that have been able to confirm that they do.

That being said, it does depend on how you define and perceive the word ’emotion.’

Taking the commonly accepted definition of the term “a strong emotion,” it does appear that axolotls do not possess them.

But it does get more complicated still.

You have different levels of emotion to consider here:

Looking at it this way, there are signs that axolotls do show basic emotions.

For instance, they are curious and react to movement outside of the tank. They begin to learn when it is feeding time, and most will even inspect the hand that may be feeding them.

You could make the argument it’s in the realm of ‘complex,’ but this is certainly open to debate.

Do they recognize their owners here? Or simply responding to stimulus in the environment?

The research is still out on this one.

But knowing that there there is evidence that amphibians, including axolotls, can experience pain, then it stands to reason that axolotls are cognizant of what is happening to them.

Axolotls do not get lonely, at least from the perspective of being away from companions that they would otherwise be within their natural habitat.

And while they can be kept in pairs, it is not a decision that should be taken lightly.

It needs to be properly thought out, considered, and implemented.

There are various factors that can impact whether or not it all works out.

But it does seem that axolotls do feel something.

How we define the word emotion, and what this all means, is still open and a fascinating channel for research.

But instead, most of the research goes into their regeneration abilities. Shame really.

Nevertheless, as axolotl owners, we must ensure we meet their needs and requirements.

What we should be taking away from these findings is that our care and our axies wellbeing is of utmost priority.

Want to learn more about Axolotls? Then my following guides may be of interest: