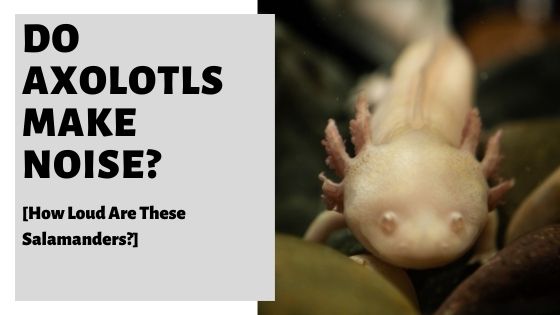 Besides, they do actually have a few predators in the wild – and when it comes to making noise specifically, large fish (such as carp and tilapia) would be the main threats.

And as we shall see, the noise they do make is ultimately a result of how they have evolved. A truly unique process of respiration where noise is a natural by-product of that.

Nevertheless, let’s look more closely at these noises and what they mean.

What Noises Can Axolotls Make?

Axolotls are mostly silent creatures, but those who have heard them make noise describe the sound as either a squeak, a hiccup, or a high-pitched bark.

When we say bark, don’t expect your Axolotl to be replacing your family watchdog.

Scientists believe that most axolotl noise is involuntary, meaning they can’t choose when they make it.

It is also pretty quiet and, well, not the most threatening.

Axolotls lack vocal cords and do not use sounds as a means of communicating with each other.

Instead, they keep track of their environment by being sensitive to the feel of vibrations in the water and land around them.

Their underwater and mostly solitary lifestyle means that they have little need for expressing themselves with noise.

Even without vocal cords, Axolotls can’t be described as completely noiseless.

Due to the way their bodies are structured for breathing both underwater and on land, they sometimes make high-pitched noises as they breathe at the water’s surface.

They may also be heard making a squeaking, hiccupping, or barking noise if they are being held outside of their aquatic environment or are being transported from one aquarium to another.

If Axolotl noise is made without vocal cords and believed to be outside of their real control, we are left to investigate just why they make any noises at all.

Why Do Axolotls Make Noises?

Researchers believe that the noise Axolotl owners occasionally hear is caused by the way Axolotls sometimes breathe. The sound they make is simply a result of Axolotls using their lungs instead of their gills to breathe. They also may make some noise when breathing through a process called Buccal respiration.

Axolotls are amphibians who are scientifically interesting because they never fully transition from a young stage of underwater life to an adult stage of life, mostly on land.

Part of this middle ground where Axolotls live their lives has led them to be able to breathe multiple ways – through gills, through a membrane in their mouth called the Buccopharyngeal membrane, through a very basic set of lungs, and even through their skin.

When underwater, an Axolotl will do most of its breathing with its unique and attention-grabbing external gills.

These gills are great at getting the Axolotl oxygen from the water.

Sometimes an Axolotl will use its Buccopharyngeal membrane for breathing underwater as well.

This type of breathing is called Buccal respiration and might be responsible for the ‘hiccup’ sound that some owners report hearing both when their Axolotl is swimming and when it is eating.

Buccal respiration happens through a series of throat spasms or pulses that cause a membrane at the back to vibrate and draw in water.

As water filters through this membrane, the Axolotl is able to absorb oxygen from the water for breathing.

Still, this process sometimes has funny results when a bit of water doesn’t flow smoothly over the membrane and creates the hiccupping noise some owners have heard when their Axolotl eats or moves around their tank.

The other reason Axolotls sometimes make noise is related to using their lungs to breathe instead of their gills.

Axolotls have very basic lungs that aren’t known for their strength.

If an Axolotl is having trouble getting oxygen from the water they live in, they may swim to the surface and use their lungs to take in oxygen.

They aren’t very skilled lung breathers, and their breathing is often in the form of quick gasps that can create a squeaking noise people hear!

This squeaking noise can also happen if you are moving your Axolotl from tank to tank and they are breathing on land during the process.

Each lung breath requires a lot of work for the Axolotl, and they can get squeaky or ‘barky’ during the process.

Once an Axolotl is back underwater and breathing with their gills, they should quiet back down.

What To Do If Your Axolotl Is Making Noises

If your Axolotl is making noises start by visually monitoring your Axolotl closely for a period of time to see if they are making the noise during feeding or as a result of frequently coming to the water’s surface to breathe. One of the most common reasons an axolotl needs to frequently surface breathe is due to low levels of oxygen in their habitat’s water and can be a sign you need to do some tank maintenance.

Occasional noise from your Axolotl isn’t something to stress out about.

Some axolotls (especially young ones) like swimming up and down their tank and breathing in a variety of ways.

So first and foremost, you want to just monitor the situation.

Try to get an understanding of how often they make noise and when they are likely to do it. Look for patterns and any other changes/developments to their ‘norm.’

If you start hearing your Axolotl make frequent sounds while also making frequent trips to the top of their tank, it is time to do a water quality check.

When checking on your Axolotl’s environment, check the water temperature, ph balance, and waste chemical levels.

These three factors can all influence the amount of oxygen your Axolotl needs and is able to absorb from the water around it.

When your ph. levels and waste chemical levels are off-balance in your Axolotl’s tank; it makes it hard for the water to hold normal amounts of oxygen.

Chemicals and ph. imbalances can also make your Axolotl’s water toxic, causing them to start searching at the surface for ways to leave and find a better body of water.

If your Axolotl is spending a lot of time skimming the water’s surface and squeaking, make sure your tank’s chemical levels are where they need to be.

It could be that you need to invest in a good filter; perhaps you’re existing one is inefficient, or you may not have one at all.

Equally, it could be a result of inappropriate water temperature.

A high temperature can increase your Axolotl’s need for oxygen by making their metabolism rise.

A sign that your Axolotl needs a lot more oxygen than normal is if they are going to the surface to directly breathe air more often.

So check the water temperature too, and ensure it is within the optimal range of between 60-64°F/16-18°C.

They don’t make a large range of noises which makes them ideal for smaller homes.

When they do make noise, it is usually high-pitched squeaking or noticeable hiccupping that is short-lived.

If they are making frequent noises, check your tank’s water quality to make sure your Axolotl doesn’t need to work hard to find oxygen, and remember that some axolotls are just a bit noisier than others.

Up next: Do Axolotls Drink Water? [The Essential Water Guide]