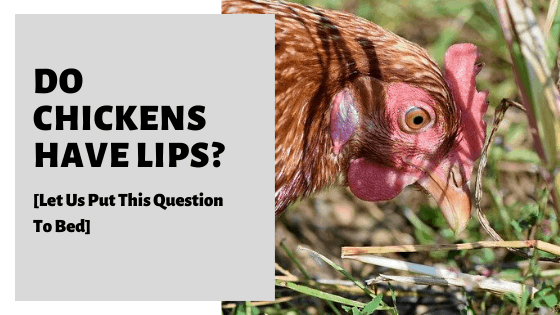 Learning about the anatomy of chickens is rather interesting. You may have some questions about what these birds do and don’t have. What about lips? Are these a body parts that a chicken does possess?

Let us now take a closer look at the topic so you can get a better understanding of why chickens do not have this facial feature.

Do Birds Have Lips?

First and foremost it is important to establish that chickens are a species of bird.

While this may be outwardly obvious to most of you reading, it is important when we consider the anatomy of our pet chickens. They have a similar biological makeup.

While most mammals have lips, including humans, of course, birds do not. Instead, they have beaks.

We can look at evolution for why this is.

Lips in mammals like humans developed due to four main reasons:

As you can see, feeding is perhaps one of the most crucial roles and functions that lips serve.

Birds do not consume food the same way.

They do not chew and they have an entirely different constitution and digestive system altogether. The process to eat is different and the organs they have and how they work are different still.

Not even the food that birds primarily consume is the same.

While chickens may graze on scraps that we provide them and in many ways ‘human foods’, from an evolutionary perspective they would not have had access nor consumed the same kinds of foods as us humans (and other mammals).

They do not feed on milk during infancy and this is a prime example of such.

Instead, birds including chickens, have different diet types and preferences – each species will obtain food in different ways.

Birds for the most part are opportunistic feeders. You can see this quite evidently on chickens. They will often eat many different foods and do not appear to be overly fussy.

While larger, more dominant species of bird will protect preferred food sources, others will store or leave food for future meals.

This is why chickens do not tend to overeat and will leave any surplus food you provide.

Once a bird/chicken acquires their food the digestive process starts.

Now that we have established how the digestive process works, what about the mouths themselves.

Chickens have beaks for mouths. The lower part of the beak fit inside the upper part. When a chicken is breathing, there should not be a gap in between these two parts. Moreover, each beak part should align and not be pushed out to one side.

A chicken’s beak is made of a strong, calcium-rich structure.

As a baby chick, it forms a crucial component to chip their way out of their shell.

Aside from the process of eating, chickens will also use their beaks to groom. They do this by running their beak through their feathers

. This is a process that is able to effectively smooth them.

Is there any other part of a chicken’s mouth that humans and other mammals commonly share?

While chickens do not possess lips or even teeth for that matter, they do have small triangular-shaped tongues.

A chicken’s tongue is very small and they fit inside the bottom of their beaks.

Scientists speculate that this is due to the purpose of the tongue in a chicken. They do not need to ‘taste’ food as such and do not require as many taste buds. They only have a few, when compared to that of a mammal.

Instead, the tongue has small catchers that stick on to food and move food to the back of their mouth.

How Do Chickens Eat Food?

Chickens are like many other species of bird in how they consume their food. It’s a process of collecting and swallowing.

Chickens have specialized beaks to help them pack at and pick up food from the ground.

Chickens are omnivores – so they can safely and do best with a combination of vegetation (grass, weed, and plants) and meat, bugs, and insects (worms, slugs, ants).

Some chickens may attempt to reduce or make food smaller and more manageable ahead of consumption if they believe it is too large.

Fruit is a prime example of this, and you can often see a chicken pecking away at scraps in order to do so.

Sometimes, chickens will even attempt to use nearby objects to break up food into smaller pieces.

Once small enough and safe to consume, chickens will tilt their head back and swallow the food whole!

The tongue is also used to maneuver the food into a good swallowing position and saliva is similarly used to support the swallowing process.

This is why it is so important for a chicken owner to provide food in manageable chunks and appropriate sizes.

For this reason, it’s always a good idea to cut up food before feeding to ensure it doesn’t get stuck or wedged in their throats.

This is also why you see feed crumbled and in pellet form.

From there, food passes down the esophagus (the muscular tube that connects the throat) into the crop.

In a chicken, this serves as an expandable food storing organ. Food will sit here for several hours – sometimes up to 12 hours at a time.

Slowly, the food is released from the crop into the chicken’s stomach (also known as a gizzard). It is here that digestive enzymes break down the food and absorb the nutrients.

It is the gizzard and digestive prowess of the enzymes why chickens do not require teeth. This organ, with the support of grit, breaks food down into much finer particles.

Once at a sufficient size, food moves from the gizzard into the small intestine while the remaining nutrients are acquired.

Leftover food residue will then pass through the ceca, and bacteria will deconstruct any of the remaining matter. Then, the even smaller food particles enter the large intestine which helps to dry out the indigestible food.

Lastly, this final trace of residue will work its way through the cloaca.

It mixes with the chicken’s urine here. Then, both the waste and urine are expelled together through the vent.

Chickens do not have lips; instead, they have beaks that consist of two parts (an upper and a lower) and a small triangular-shaped tongue. They do not have any teeth.

While scientists have several a reason why they believe humans and other mammals have lips, for chickens we can look at evolution as a primary factor.

This is why as a chicken owner is so important that you consider their diet.

That you only provide food in small and manageable chunks, and that you provide foods that align with their needs.