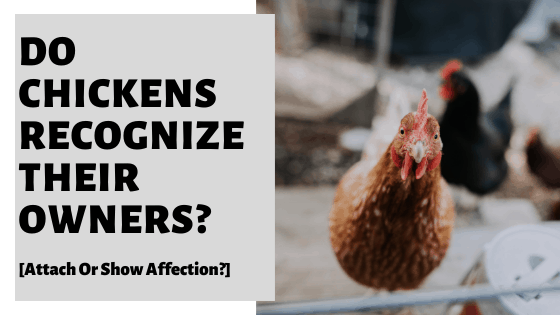 As a chicken keeper, it would be nice to know that your birds could recognize you. Especially for all of your efforts. But do chickens have this ability; can they differentiate between humans? I spent some time researching to find out!

One thing is for sure. Chickens are intelligent.

Studies have shown that this ranges from the complexities involved with establishing and living by a social hierarchy (pecking order), all the way through the ability to perceive time and anticipate future events.

And there are plenty other signs of intelligence too.

Emotional sophistication, social cognition and interaction are other areas that these birds possess, and play a key role in how they interact and respond to their owners.

Let us now take a closer look at some of those fascinating other areas; such as whether these birds can learn to recognize their names, whether they can bond with their owners and even show affection.

So, be sure to keep on reading if you are currently or intend to keep chickens and want to know what you relationship, could potentially be like, with them.

Chickens have developed complex recognition abilities to navigate the world; keeping themselves safe, their needs met, and their social hierarchies in tact.

It all starts with the flock.

Chickens show impressive abilities to recognize individuals in their group, as well as keeping track of where each member is in the social hierarchy. They even differentiate individuals and discriminate among them [source].

This is known as social learning and its how they benefit mostly from group living. Besides, it helps them stay safe and avoid dangerous, time-consuming or unnecessary actions and behaviors.

For a bird that relies so heavily on humans for their care, it comes as no surprise to learn that they also, can recognize us.

But, upon exploring the research, its very interesting to find out exactly how.

Chickens, partly recognize and discern people based on how they look.

Chickens prefer beautiful humans so the title of the paper reads, where the researchers found that chickens have a preference for symmetrical faces.

But does it extend further than just visual appearance? Are there emotions involved?

Let us delve a bit deeper!

Do Chickens Get Attached To Their Owners?

There is certainly anecdotal evidence that chickens get attached to their owners. This is commonly observed in those who provide food, water and shelter.

And when we look at the definition of the term, “full of affection or fondness”, we can see the argument for it.

In keepers who commonly talk to their chickens, they even report that their birds follow them around, even back to the coop come the evening.

Then there are those reports of keepers who experience the other side of it; chickens whom run away from them. Especially in the early days of keeping them.

It appears that chickens develop preferences to humans who treat them well, and that they can recognize them for it.

It also goes the other way.

For instance, chickens appear to learn and remember those individuals who handled them incorrectly, were not as willing to offer treats, were short tempered etc.

With all this being said, there is a counter-argument.

Its based on a phycological concept called ‘Anthropomorphism’

“Anthropomorphism,” as it is used today, refers almost entirely to the attribution of consciousness, emotions, and other mental states, commonly regarded as exclusively or predominantly human, to nonhuman animals”

In other words, are we putting our human characteristics and behaviors of attachment on to our chickens?

Is there an actual attachment, or it is something that we are looking for and trying to perceive?

Besides, could it be the case that chickens are not actually attached to us from an emotional perspective?

Instead, do they simply develop associations of certain people based on these positive and/or negative experiences.

So is a chicken simply looking for a treat and know where to get one? Is this just mere anticipatory response?

Its certainly open to debate.

There is no conclusive evidence as of yet, but it does raise important questions.

Do Chickens Show Affection To Humans?

Many chicken keepers will tell you that their birds show them affection.

There are plenty of reports of chickens sitting on the laps of their keepers, looking excited when they return home, and generally showing signs of happiness around them.

Again, by looking at the definition of the term, we can start to get a greater understanding of if this kind of behavior can be seen as displays of affection.

But it does depend on the definition of the term you take.

Of course, we can see that chickens can show affection to their owners with the first definition.

The second one is more tricky.

The words “caring” and “loving” are the words here that can cast some doubt.

Chickens do certainly feel a range of emotions. And it has been confirmed that they do show empathy towards other chickens and chicks.

The science does not quite confirm that chickens can feel empathy, or these other more sophisticated emotions, towards humans however.

We do not quite know whether a chicken generally cares and loves their owner. Or, like we have already touched upon earlier, whether they just develop positive associations around certain people.

So, it does depend on your perspective and understanding of the term, it would seem.

Can Chickens Learn Their Names?

Chickens can learn their names, so long as it is repetitively and consistently used in reference towards them.

Furthermore, a keeper would need to build the association, through positive reinforcement.

In fact, there are even chicken training course books available on Amazon that leverage the use of a clicker!

Nevertheless, to teach a chicken their name, its best to do so where action results in reward.

For instance, if you were to provide a treat each time your chicken were to respond or to follow you, they would soon develop the association.

With a little bit of consistency, calling the name would soon result in the same response from your bird, such as coming towards you.

It is through this kind of training that many keepers report that all of their birds know their names.

Some even mention that their chickens respond vocally towards them when their name is called.

There is certainly a lot of fascinating research on chickens and how they perceive the world around them, including their owners.

While we are starting to understand that chickens are a lot more complex than at first thought, unfortunately the research can not quite yet conclude how far our relationships truly go with these birds.

They certainly recognize humans; and can differentiate from those who treat them well and those who don’t.

But, whether or not they care for their keepers is another matter altogether.

What we can safely conclude is that, by treating your flock well – caring for them closely, attending to their needs, and keeping them happy – you can certainly have a better relationship with them.

It may not be experienced by your chickens in the way you might like, but its good for your birds, and the relationship you have with them.