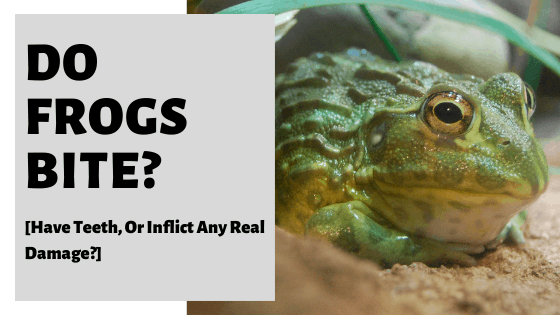 A frog biting. It’s hard to imagine. But do these amphibians ever do so? And more importantly, are bite dangerous or painful? Here is what you need to know.

So, do frogs bite? Frogs can bite, with some species being more likely to do so than others. Frogs are most likely to bite in self-defense when agitated or feel threatened or accidentally nip while feeding. Nevertheless, frog teeth are tiny and dull; a bite is unlikely to pierce the skin or pose much danger to humans.

Perhaps not what you were expecting to discover.

Frogs just do not seem like the biting type.

But they can, and they will, in certain contexts.

And if you are considering owning a frog, it certainly helps to know when, why, and all that is involved if they were to.

Plus, if you are yet to select a species, it may also help to be aware of those that are more prone to doing so.

If this is making you a little anxious.

Do not worry; I’ve got you covered.

So, let us now run through the various aspects of biting in frogs, so you know exactly what to expect should you do decide to ever own this exotic pet.

Do Frogs Have Teeth?

Frogs do have teeth, but they are only positioned on the upper jaw. In fact, frogs have two different types of teeth; maxillary teeth and vomerine teeth (which grow behind and are found on the roof of the mouth). There are no teeth on the lower jaw.

Maxillary teeth are cone-shaped, whereas vomerine teeth are relatively flat and appear as small nubs.

Nevertheless, both types of teeth are blunt – a bite is unlikely to penetrate the skin.

Instead, frogs use their teeth for one primary purpose. Eating.

But not in the way you may have imagined.

They do not chew and grind up their food.

Instead, their teeth grip their prey.

The teeth work to hold the prey still while they proceed to digest whole.

In fact, their eyeballs work to push the prey down into their throats.

Disgusting but entirely fascinating and amazing.

But there is one other distinction to note here.

These frogs have fang-like projections.

These are not teeth in the true sense of the word. They are also bone-like growths that look like teeth.

And they are only used to support the capturing and gripping of prey.

So it appears to be just an evolutionary adaptation.

The common species of frogs will not possess these fangs, instead just their blunt teeth found on the upper part of the jaw.

Why Would A Frog Bite?

Frogs will only typically bite for two different reasons; as an act of self-defense when they feel threatened or cornered or as part of their feeding routine. Either way, it’s not in a frog’s nature to actively look to bite.

Most species of frog consume a diet of insects, worms, and small arthropods (spiders, millipedes, etc.)

And to capture their prey, they use a combination of their sticky tongues and teeth to grip and hold them in place before they can swallow.

Now, how dissimilar are our fingers?

Or, what are the chances of us wanting to feed our frogs by hand?

As such, if you own a pet frog, there is an increased likelihood of getting bitten during feeding.

Generally, this would be entirely accidental, but likely nonetheless.

This is why feeding tongues (like this from Amazon) are often recommended.

A frog’s primary means of self-defense is camouflaged skin. Some species even have poisonous secretions on their skin to prevent them from being eaten.

However, some species are more likely to bite out of self-defense—particularly when vulnerable or during high-pressurized environments – such as during the mating season.

Thus, males can be a little more territorial – especially to other males who may be seen as a threat.

Of course, the risk of biting has a lot to do with the species and the context.

While still possible, the chances of being bitten by a wild frog are a lot less than if you are to keep one in captivity.

And if you are to keep this exotic pet, consider that there are three specific species that are known to have a higher propensity to bite:

Now you may or may not want to take on these species for these reasons. But, with mindful care and a little bit of consideration, you can certainly keep these frogs without routinely being bitten.

While it is true that they may have a slightly higher propensity for aggression, not cornering them or making them feel threatened and being careful while you feed will prevent biting from happening.

And you would usually be able to see the signs before they strike too.

For instance, Budgett frogs actually make themselves pretty big first and foremost. They want to intimidate their predator in the hope of preventing an attack.

If the threat does not disperse, then they may strike.

So you would be given a warning, at least if you lookout for it.

Thankfully, if they (or any other species of pet frog) were to bite, it’s not likely going to hurt much, as the next section explains.

What Happens If A Frog Bites You?

In the event that a frog was to bite, it is unlikely that they would be able to inflict anything more than a blunt nip.

As they have small, relatively flat teeth, it is unlikely that they will be able to pierce the skin or cause any long-lasting damage.

As such, frog bites are not generally considered to be a threat or danger to humans.

While it is obviously not ideal to be bitten, it is not really a cause for concern.

Naturally, you may be wondering about poisonous frogs here.

Well, even in poisonous species, a bite would not be harmful.

The poison is actually secreted via their skin.

They do not inject poison via biting. That would actually make them venomous. But even then, venomous frogs would not inject their venom in this way.

Does It Hurt When A Frog Bites?

It does not generally hurt when a frog bites. You may feel a small little nip, but it is unlikely to be too painful.

However, it does depend on your pain threshold and the species in question too.

Some larger species of frog will bite with greater force than other smaller, more reserved species.

And, of course, if a frog does manage to penetrate the skin, it can be a little irritated thereafter, at least until the wound heals.

You may find that the open wound stings a little, especially if any products or household items get into the wound.

In the rare case that a frog bite was able to penetrate the skin, you will need to treat it accordingly.

We will now look at how to do so.

What To Do When A Frog Bites

If a frog bites, your response will be largely dictated by the extent of the injury. In most instances, you will feel a small nip, and that will be it. If there is a small open wound, you will need to dress the area accordingly.

In the case of owning a frog as a pet, it’s important that you are mindful anytime you are putting your hand in your frog’s enclosure.

You need to be prepared, or at least acknowledge that they could bite.

And if they were to, you need to be careful not to react and harm your frog in your response.

Try not to react and flail your hand or arms.

It’s hard. It’s a reaction we all have.

But, you need to withdraw your hand slowly and carefully not to harm your frog.

If your frog is attached, you need to carefully let them release you.

Do not attempt to break the attachment – you could do serious damage to your frog’s jaw in doing so.

In a few seconds, your frog will let go.

From there, take your hand out slowly and assess the wound.

If a little blood is drawn, then you will need to get a Band-Aid.

Perhaps a little Neosporin would not go amiss either.

Chances are if you are bitten, you are unlikely to draw blood.

But if you do, adhere to the wound and cover it up. You do not want to risk infection.

Can being the important word to consider here.

Biting is not something these amphibians are known for.

Sure they may respond if provoked, but again this is reactionary. They are not going out of their way to do so.

The fact that their teeth are so blunt is evidence enough. While teeth are essential to these amphibians, the intentions for them are primarily a dietary one.

And if you do ever decide to own a frog, rest assured any bites will not be too frequent or painful.

And with some apparatus like feeding tongs, the risk is reduced greatly.